The Man who Came by Night 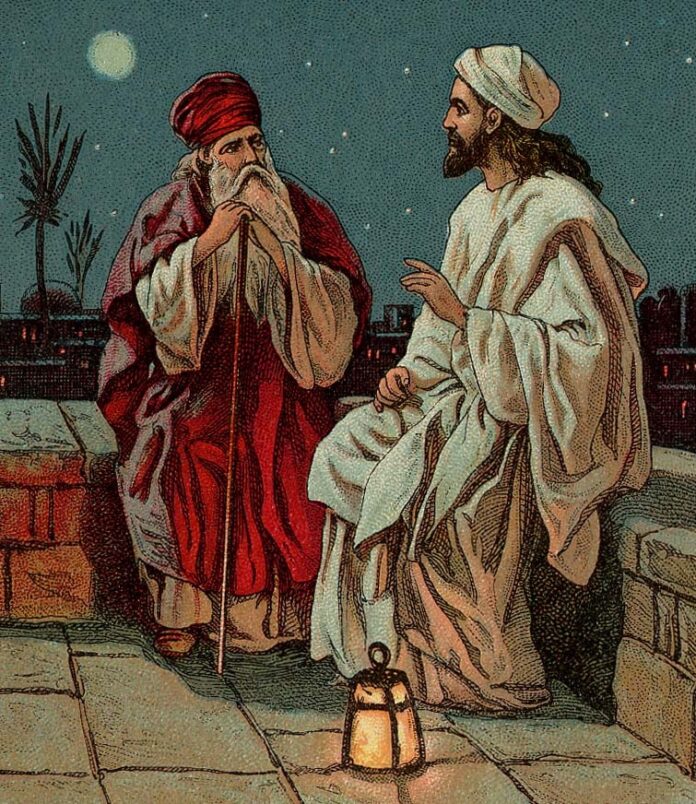 JESUS’ MINISTRY had only recently begun, but already he was antagonising the authorities. John chapter 2 describes his visit to the temple in Jerusalem during the busy Passover festival. The corrupt rulers had commercialised the temple and were profiteering from the pilgrims who came to worship. Jesus was incensed, and drove them out (John 2:14–16).

After this he received a visit from a member of the authorities.

Now there was a man of the Pharisees named Nicodemus, a ruler of the Jews. This man came to Jesus by night and said to him, “Rabbi, we know that you are a teacher come from God, for no one can do these signs that you do unless God is with him” (John 3:1–2).

Nicodemus was a member of the Sanhedrin, the supreme Jewish council. He came by night, evidently because he didn’t want people to know about his visit. We don’t know whether he had been sent by the Sanhedrin, or whether he was hiding his visit from them as well.

We’re only given a summary of the discussion between Jesus and Nicodemus. It ends with Jesus’ words, “This is the judgement: the light has come into the world, and people loved the darkness rather than the light because their works were evil. For everyone who does wicked things hates the light and does not come to the light, lest his works should be exposed. But whoever does what is true comes to the light…” (vs. 19–21).

Jesus claimed to be the ‘light of the world’ (John 8:12). Nicodemus had come to the light, because he wanted to know more— but he had come under cover of darkness, because he wasn’t ready to commit himself. Jesus left him with a challenge: would he become Jesus’ follower, or would he slink back into the darkness?

The Jewish authorities were constant critics of Jesus. They recognised him as a threat. Actually, a number of them did secretly believe in him, but they weren’t prepared to admit it: ‘Many even of the authorities believed in him, but for fear of the Pharisees they did not confess it, so that they would not be put out of the synagogue’ (John 12:42). They did not have the courage to come to the light.

The next time we see Nicodemus is in John 7. The Pharisees had tried to have Jesus arrested (v. 32), but the plan hadn’t worked and they and chief priests were holding a heated discussion. Surprisingly, one of their own number spoke up in defence of Jesus: ‘Nicodemus, who had gone to him before, and who was one of them, said to them, “Does our law judge a man without first giving him a hearing and learning what he does?” They replied, “Are you from Galilee too? Search and see that no prophet arises from Galilee”’ (vs. 50–52). Nicodemus spoke up for what he knew was right, and—as often happens—he was met with ridicule.

This is a challenge that all followers of Jesus need to face, sooner or later. You cannot be a ‘closet Christian’. To be a follower of Jesus Christ means letting your light shine (Matthew 5:16). If your light does not shine, then you’re in darkness and you’re not following Christ.

Standing Up and Standing Out

Three years after that first Passover, Jesus’ mission was complete. The time came for him to die on the cross. His enemies finally managed to have him arrested, thanks to the treachery of his disciple Judas (who chose to go out into the dark rather than stay in the light, John 13:30). The greatest miscarriage of justice in world history was perpetrated, and Jesus was crucified. Ordinarily the bodies of crucified criminals were dumped over the city walls into the Kidron Valley, but finally it was time for Jesus’ friends to show themselves:

After these things Joseph of Arimathea, who was a disciple of Jesus, but secretly for fear of the Jews, asked Pilate that he might take away the body of Jesus, and Pilate gave him permission. So he came and took away his body. Nicodemus also, who earlier had come to Jesus by night, came bringing a mixture of myrrh and aloes, about seventy-five pounds in weight. So they took the body of Jesus and bound it in linen cloths with the spices, as is the burial custom of the Jews… (John 19:38–40).

Jesus’ body was not thrown into the city dump, it was buried with reverence in a tomb, and so his resurrection could be witnessed and verified.