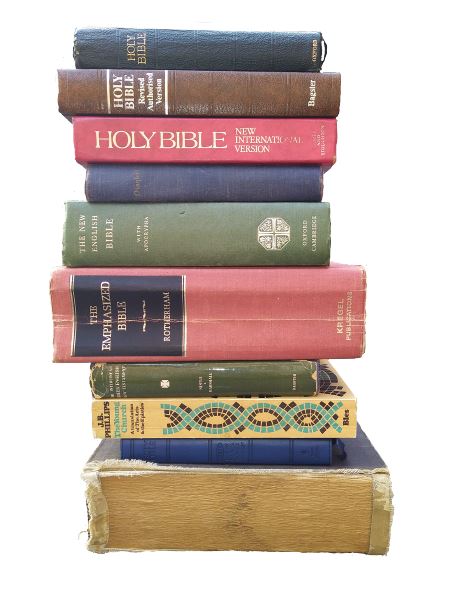 IT IS EASY to get hold of an English Bible. In fact we have a lot of choice because there are dozens of different translations. We can use a paper copy or read it for free on the internet, or download it to a mobile phone.

However, there are an estimated 250 million people in the world without access to any part of the Bible in a language that they understand well. There are over 2,000 languages without a translation. Printed English Bibles have been available since the 1500s but translations into other languages came much later. For example the Bible was translated into Farsi and Russian in the 19th Century and into Afrikaans in the 20th Century. The Bible is still a best-seller, although not read as much as in previous generations. Nonetheless, many people still treasure their Bible. After all, it claims to be God’s Word. But how did our English Bible get to us?

The Bible consists of 66 books written by more than 20 authors over a period of 1,500 years. People were able to write (for example by etching on stone) from 3,000 BC or earlier. The words of the Bible were originally written on clay tablets, material made from the papyrus plant, or animal skins. There were 39 books written before the time of Jesus (the Old Testament), mostly in Hebrew. The 27 books of the New Testament were written after Jesus had ascended to heaven following his crucifixion and resurrection, and mostly in Greek.

None of the original manuscripts still exist. All of our translations come from manuscripts at the end of a chain of careful copying by scribes. After the Jews had returned to Israel from their exile in Babylon in 538 bc they assembled their sacred writings. In the 3rd Century bc more Jews spoke Greek than Hebrew and so a Greek translation was produced, taking decades to complete. This is called the Septuagint and was one of the versions in use at the time of Jesus. Translators often refer to this translation as well as to Hebrew texts, because it came from very old manuscripts.

The Jewish scribes treasured their (Old Testament) scriptures and carried out meticulous checks to prevent errors. This was most certainly true for the Masoretes (6th to 10th Centuries ad). They listed the special features of each section, for example the number of times a rare word or short phrase appeared, the total number of verses, words, and letters, and which word, and which letter marked the centre of the section, and checked each copy. Experts have been amazed by the accuracy of the manuscripts.

In the 1940s a very important thing happened. A shepherd boy, apparently by chance, found a cave near the Dead Sea containing very old jars and scrolls. These became known as the Dead Sea Scrolls, and they contained extracts from every book in the Old Testament except Esther. They were important because they were about 2,000 years old. When compared with the later manuscripts that were being used for translation there were no significant differences. This shows the accuracy of the painstaking process carried out by the Jewish scribes.

The oldest fragment of the New Testament is part of John’s Gospel, and dates from the 2nd Century ad. There are over 5,000 Greek manuscripts of part or all of the New Testament. For other ancient documents (like Caesar’s Gallic War) there are far fewer documents and much longer time gaps from the original time of writing. So, amazing though it may seem, we can have confidence that the Bible manuscripts used by translators are accurate.

In 382 ad a Latin version of the whole Bible was commissioned by the Pope. This is known as the Latin Vulgate Bible. But Latin could only be read by the highly educated. Even some of the clergy could not read Latin. So the Bible was not accessible to many people.

In about 1400 John Wycliffe translated the Latin Bible to English, and hand-written copies of his translation were circulated. The invention of printing meant that the Latin Vulgate version could be printed in Germany in 1455–6. By the end of the 15th Century there were printed Bibles in several western European languages.

But the established Church was opposed to people translating or reading the Bible without its permission. William Tyndale (1494–1536) translated the New Testament from the Greek and Latin, but (like many of his helpers) he was executed before he could complete the Old Testament. James Coverdale continued his work, translating the Old Testament largely from Latin, and the first complete English printed Bible was available in 1535. In 1539 copies of the ‘Great Bible’ were available in all parishes in England. But there followed a period of contention between the Roman Catholic Church and Protestants. Many people were killed for reading the Bible, and so some Protestants fled to Geneva and produced the ‘Geneva Bible’. The Catholics tried to remove the influence of Wycliffe and produced their own translation from the Latin, called the ‘Douay Bible’.

There was an important landmark in 1611 when the King James version was produced. This book had a huge influence on the development of the English language and is still in use today, although many now find its language archaic. The translators used the original Hebrew and Greek, also consulting translations in other languages. A team of about 50 scholars worked on the project, and their respect for the actual words of the text are shown in the Preface to this Bible. Since then there have been many different English and foreign translations. For these later translations the scholars often also consulted extra manuscripts which have been found more recently.

Translating an ancient language is not easy. Some words are no longer used and others have changed their meaning over time. Moreover, it is not simply a matter of translating word by word. A good translation conveys the same message as the original text. This requires an understanding of the context of the words. English translations vary in the degree to which they aim for ‘word for word’ (or ‘literal’) translation, or ‘meaning for meaning’ translation. The former can be more difficult to read as the language does not ‘flow’. The latter are relatively easy to read but can be less accurate as there is always an element of interpretation rediscovered which can lead to inaccuracy. The preface of a Bible translation usually indicates the philosophy of the translators and the degree to which the translation is ‘literal’. So translations can vary and it is wise to compare versions if possible. Some versions are paraphrases which cannot be used on their own for serious Bible study.

There are also many commentaries and dictionaries which attempt to explain Bible themes and concepts. They can be very useful, but we must remember that they are written by fallible people and are subject to errors of interpretation. It is always essential to check the actual Bible words and context in a reliable translation. It is also important to read the whole Bible. For example, the New Testament, including many of the words of Jesus, continually refers back to the Old Testament.

We Should Read It!

The Bible is an amazing book, with a unique and potentially life-changing message. If you can read this magazine then you can read a Bible for yourself. People have tried to destroy it, others have given their lives so that we can have it in our own language. More than that, it tells of a perfect man (Jesus Christ) who gave his life so that we can have hope of eternal life. Why not resolve to start reading it carefully today?