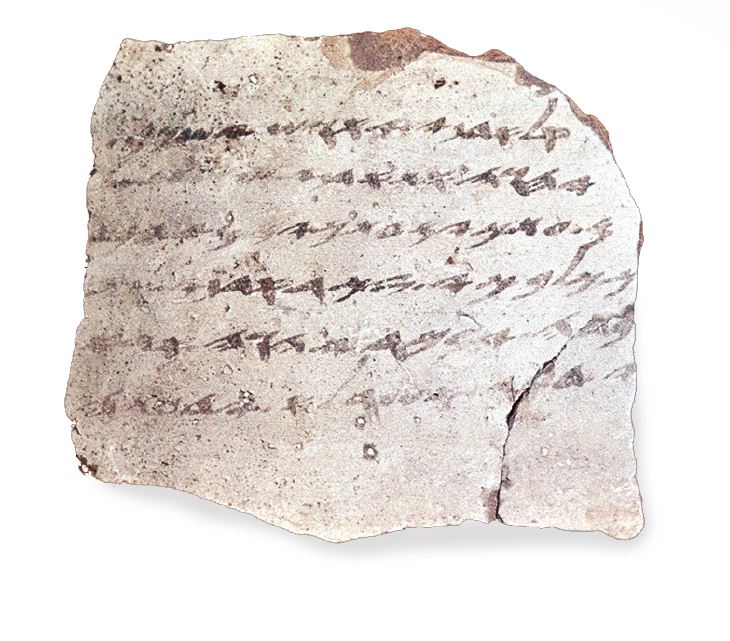 IN THE RUINS of a building which is thought to have been a guardroom, close to the remains of the ancient gates of the city of Lachish in Israel, excavations unearthed a number of fragments of clay jars. These were not ordinary broken jars, they’re called ‘ostraka’. They were pieces of broken pottery that were used as cheap writing material.

There are a couple of dozen ostraca in the collection. It’s possible that they all came from the same jar, and were a series of letters written by the same person. They were found in a layer of burnt remains which archaeologists date to the destruction of the city by the Babylonians in 588 bc.

The Babylonian invasion is described in the Bible, for example by the prophet Jeremiah:

The word which came to Jeremiah from the Lord, when Nebuchadnezzar king of Babylon and all his army, all the kingdoms of the earth under his dominion, and all the people, fought against Jerusalem and all its cities… when the king of Babylon’s army fought against Jerusalem and all the cities of Judah that were left, against Lachish and Azekah; for only these fortified cities remained of the cities of Judah (Jeremiah 34:1–7).

Jeremiah’s prophecy contains distressing accounts of the wickedness of the people of Israel, of God’s pleas to mend their ways and His warnings of the consequences if they didn’t. It also describes the final invasion and destruction of the kingdom. Many Israelites were slaughtered, and most of the remainder were carried away captive.

The Lachish Letters were written by an officer called Hoshaiah, who appears to have been the commander of an Israelite military outpost in the path of the advancing Babylonian army, to Yaush who was in command of the defence of Lachish. The letters give a glimpse of a time of intrigue, panic and distress in the dying days of the kingdom of Judah.

The illustration shows Letter II, which reads: “To my lord, Yaush, may Yahweh cause my lord to hear tidings of peace today, this very day! Who is your servant, a dog, that my lord remembered his servant? May Yahweh make known to my lord a matter of which you do not know.”

Hoshaiah prays that God will bring them tidings of peace. But God’s prophet declares “We looked for peace, but no good came; and for a time of health, and there was trouble!” (Jeremiah 8:15). It’s likely that both men perished soon afterwards in battle.