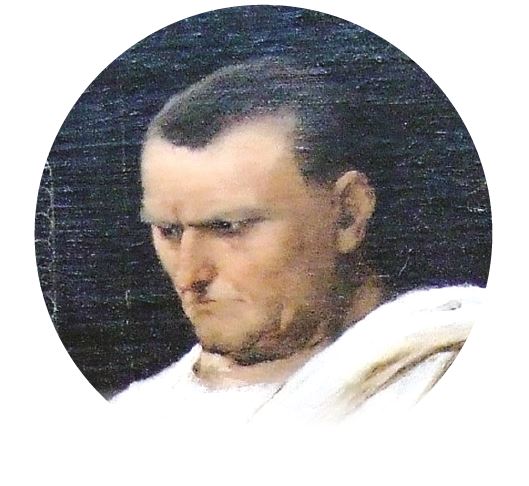 Pontius Pilate was the Roman governor who sentenced Jesus Christ to death. This is an imaginary memoir, but it is based on the facts as we know them from the Bible and archaeology (except the ending, for which there is no evidence.) The Bible verses are given for reference. You can catch up with Part 1 here, Part 2 here, and Part 3 here.

Part 4
I ORDERED WINE, and as I drank I summoned a scribe. Over each cross we wrote the crime for which the prisoner was being executed. I dictated to the scribe: Jesus of Nazareth, the King of the Jews. I had it written in Latin, Greek and Hebrew. I knew it would enrage the Jews. Sure enough during the afternoon a deputation from Caiaphas came with a demand: “Do not write, ‘The King of the Jews,’ but, ‘He said, “I am the King of the Jews.” ’ ”. I sent them away (John 19:22).

I drank heavily, and lay down, and darkness descended (Matthew 27:45). I presumed it to be the wine. The panicked whisperings of the servants outside my apartment ﬂitted around the periphery of my dazed thoughts.

Then the daylight returned, but it was still afternoon. I winced groggily as my secretary ushered someone in. This time it was a lone Sanhedrin member, and he obviously wasn’t there with his fellows’ blessing (Matthew 27:58). He was nervous. He wanted permission to have the body of Jesus. I was confused, and checked the hour. Crucifixion is one of our most ingenious inventions, it’s a death that lasts for days, I would not have expected even someone in Jesus’ state to be already dead. I called the centurion who’d been on duty, and he confirmed that the victim had died mid afternoon.

I waved the Jew away and said he could have what he wanted. Then I quizzed the centurion—what had happened up on the hill? He was agitated, and unwilling to say more than protocol dictated. The experience had clearly affected him (Matthew 27:54). I dismissed him, and drank some more.

The following day I was keen to forget the whole episode. The sun shone, the world carried on. But I was not allowed to forget. Caiaphas was not content with his achievement. A deputation arrived—not just priests, this time there were Pharisees as well (Matthew 27:62). Now they’d had what they wanted they were in very much more conciliatory mood: “Sir, we remember, while he was still alive, how that deceiver said,  After three days I will rise.’ Therefore command that the tomb be made secure until the third day, lest his disciples come by night and steal him away, and say to the people, ‘He has risen from the dead.’ So the last deception will be worse than the first.”

I had no respect for the way they had treated that man, and I was still smarting at the way they’d humiliated me—but I could see that life was quieter with him gone, and nobody wanted a gang of extremists claiming that their Messiah had risen from the dead. I said, “You have a guard; go your way, make it as secure as you know how.”

I devoutly hoped that that would be the last I heard of the matter. Three days, they had said. On the third day the report came that the guard had been breached and the Galilean’s tomb was empty. Bemused and, I admit, fearful, I ordered an enquiry. But then another visit from the priests, and the weight of gold this time was substantial (Matthew 28:14). The brigade of guards escaped execution, and I acquired a sum on which I could have happily retired.

I tried hard to forget that day. Every day I tried to forget it. Time went by, and reports came in with regularity: the Galilean’s disciples were turning Jerusalem upside down, preaching that he was alive (Acts 2). The priests were stamping hard on the movement, but the more they stamped the more it grew (Acts 4). Soon it was not just Jerusalem, the whole world seemed to be on fire with their preaching (Acts 17:30). I could not forget.

As for me? I’d been warned these people were ungovernable. They called my judgement into question, they said I was too heavy-handed, and perhaps they were right. I became increasingly nervous. Shortly afterwards there was a gathering on Mount Gerizim, I crushed it with force and the Samaritans lodged a complaint with the Legate. I was recalled to Rome, and my career was over.

The world was ablaze. Everywhere the Christians were preaching that the man from Nazareth was alive. That awful day was constantly in my thoughts. There came a moment when I could resist no longer. I sought out a congregation of believers. I could not avoid confessing to them who I was. It was difficult for all of us, but the mercy and love of Christ prevailed. I believed, I threw myself on the mercy of God, I was baptised, and the crushing weight of my guilt fell away.

I’m old now. I ache and creak. I can’t do much, but I do what I can to serve my master and my brothers and sisters. I know that one day I shall stand before the judgement seat of the Galilean. And I trust that by the grace of God I shall receive an answer of peace.