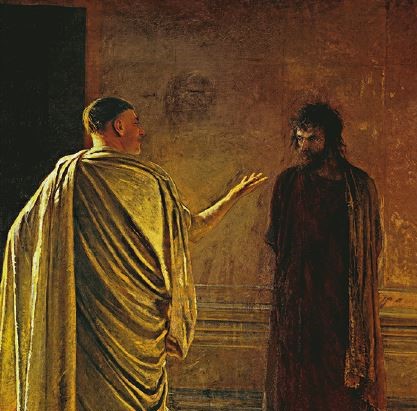 Pontius Pilate was the Roman governor who sentenced Jesus Christ to death. This is an imaginary memoir, but it is based on the facts as we know them from the Bible and archaeology. The Bible verses are given for reference.

You can catch up with Part 1 here.

IT WAS LATE morning when they returned from Herod’s palace. I heard the babble of the crowd outside; my secretary informed me that the prisoner was waiting. I strode into the Praetorium, and there he was.

He was wrapped in the remains of a long gilt robe of purple and scarlet (Luke 23:11). There was an air of jollity among his guards, they smirked and winked. I grinned, and my henchmen chuckled. “It’s the king of the Jews!” I pronounced, and they guffawed. I instructed my secretary to send a message of congratulation to Herod. I’d never before trusted the old fox, but now I saw he was prepared to have a joke at the Jews’ expense, I respected him for that (Luke 23:12).

I regarded the prisoner. He regarded me. He stood there, bruised and dishevelled and dirt-streaked and almost comical in that pathetic royal outfit, but in his face a strange air of serenity. He had this way of looking at you that made you think he was looking through you, into your heart. I squirmed inwardly.

The priests wanted progress, they were waiting. I strode out into the portico and sat down on the judgement seat. They gathered around the balustrade. The guards pushed the prisoner before me. At sight of him the priests erupted into shouts and yells, scooping up handfuls of dust from the floor and flinging them into the air, hurling accusations at him. Even I could tell that there could be very little substance in the things they were shouting.

I watched him, curiously. Now would be the time to speak up and stop this. It was plain enough, even to me, that the simple reason for their hatred of him was envy (Matthew 27:18)—envy of his influence and popularity with the people. They had no case against him. With a few words he could demolish their accusations and humiliate them, it would be easily done.

But he just stood before them, meek and impassive. It was as though he was deliberately giving in.

My guards were edging forward, ready to move in and beat them back should they try to scale the balustrade. The situation was growing uglier, and I was impatient. “Do you answer nothing?” I shouted at him, struggling to make myself heard over the uproar: “See how many things they testify against you!”

He turned his gaze on me, and said nothing. I could not believe that it was possible for a man to be so composed and dignified in the face of such vicious provocation. I marvelled (Mark 15:5).

I needed to act. I motioned to the guard to pull the prisoner back and gestured to the crowd. A bad-tempered hush fell. “You have brought this man to me,” I said, “as one who misleads the people. And indeed, having examined him in your presence, I have found no fault in this man concerning those things of which you accuse him; no, neither did Herod, for I sent you back to him; and indeed nothing deserving of death has been done by him.” An indignant murmur broke out but I stilled it angrily. “I will therefore chastise him and release him” (Luke 23:14-16).

The priests roared with rage.

When I took on this post, I was warned what a troublesome lot the Jewish leaders were. Ungovernable, some said. I’d been under no illusions about the job, it had been necessary to use force and bluster and in the half dozen years I’d been in the post I’d had numerous confrontations. I’d never known people like them, so passionately proud and nationalistic. They despised all foreigners, particularly Romans, and above all they despised me.

I could not resist goading them. “You have a custom that I should release someone to you at the Passover. Do you therefore want me to release to you the king of the Jews?” (John 18:39). I nodded mockingly, first to them and then to the prisoner.

I was afraid of that. Barabbas was in prison awaiting execution, he was the ringleader of a rebellion in the city—the crime of which they were accusing Jesus. But Barabbas was a political revolutionary and a killer. Not the kind of man I wanted roaming the streets of Jerusalem. How ironic that they’d prefer a man like Barabbas to this man.

In the midst of the uproar my secretary bustled over with a note. I snatched it impatiently, it was from my wife of all people. I slapped him for his stupidity, he smarted and explained that she had insisted I read it because it was of the utmost importance. I unfurled it: “Have nothing to do with that just man, for I have suffered many things today in a dream because of him” (Matthew 27:19).

A prickle of cold sweat rose on my forehead. I felt as though I was losing control, I was caught up in something which somehow had its own momentum.

While I had been distracted the crowd was growing—the gaggle of priests with their officers and henchmen were now the nucleus of an ugly mob of locals and pilgrims who were running in from the city to see what the noise was about (Matthew 27:20). Many of them may have had little idea what was going on, but they were caught up in the fervour and they were fiercely loyal to the priests. I needed to put a swift end to this before a riot began.

“Which of the two do you want me to release to you?” I asked.

“What then do you want me to do with him whom you call the King of the Jews?”

I was used to the rough realities of summary justice, I knew very well that convenience often won over truth, but I was taken aback by the sheer violence of their hatred. I shouted to make myself heard: “Why, what evil has he done? I have found no reason for death in him. I will therefore chastise him and let him go.” (Luke 23:22).

A yell of rage erupted from the mob in front of me. “Crucify him!” The crowd was infected with the venom of the priests and the square rang to the sound of the chant, “Crucify him!”

I looked at the man. He stood there in front of them, shivering slightly, wilting with pain and fatigue, regarding the crowd. His face was blood-stained and hideously disfigured, a huge black bruise swelled around one eye. I looked for hatred, fear perhaps—but all I saw was sadness.

Looking back now, I know it was an empty gesture. But I was disgusted at the spectacle of this foul mob and I wanted nothing to do with their antics. I called for a bowl of water, and standing in front

of them I washed my hands in it, and as they cat-called and jeered I bawled at them, “I am innocent of the blood of this just person. You see to it!” (Matthew 27:24).

Without hesitation the shout arose, “His blood be on us and on our children!” (Matthew 27:25). I can’t forget it, the recollection of that furious shout plagues me. Sometimes I can’t shut it out of my mind. It makes me afraid.