Saul on the Damascus Road 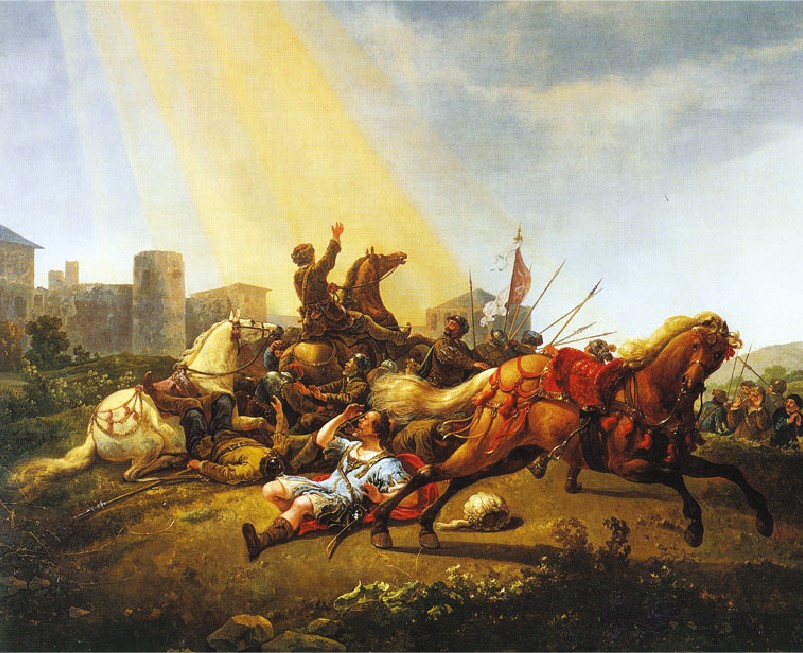 This must be one the most amazing and moving stories in the Bible—except for the life of the Lord Jesus. It is a story of power, zeal, religious passion and hatred, and it ends with humility, grace and love. You may be more familiar with Saul by his later name—the Apostle Paul.

To fully appreciate the incident we need to examine his background, and very interesting it is. Saul was born in Tarsus in the province of Cilicia, said to be ‘no obscure city’ (Acts 21:39). By birth a Jew of impeccable pedigree, his father a Pharisee, a Roman citizen. He quoted this when arrested (Acts 16:37, 22:25–26).

It was the Jewish custom to teach boys a manual trade, and Saul was a tent maker (Acts 18:3). He would have left his home as a young man and gone to Jerusalem, where he would be educated in the Jewish laws and in particular the Law of Moses. He became a top student, as he sat at the feet of Gamaliel who was the most outstanding teacher of the day (Acts 5:34, 22:3). It was in this religious environment that this young man was educated and grew in knowledge. He later tells us he thrived on it: ‘I was advancing in Judaism beyond many of my own age among my people, so extremely zealous was I for the traditions of my fathers’ (Galatians 1:14).

Saul makes his sudden appearance in the Bible record at the stoning to death of the Christian martyr Stephen (Acts 7:58). It appears that Saul was the ringleader.

The Jews believed that God would one day send their Messiah to deliver them from all their enemies. They expected the Messiah to be a good well-educated Jew, possibly a Pharisee. But here were these new uneducated preachers teaching that the Messiah had come already, and he was a carpenter from Nazareth who had been crucified and rose from the dead! Now they were attracting many Jews as converts. This preposterous new teaching was against all that Saul had been taught. He felt that it was his duty to God to stop it.

Saul’s mentor Gamaliel offered wise advice to the Jewish council: ‘Keep away from these men and let them alone, for if this plan or this undertaking is of man, it will fail; but if it is of God, you will not be able to overthrow them’ (Acts 5:38–39). But Saul ignored this advice. He later recalled: ‘I punished them often in all the synagogues and tried to make them blaspheme, and in raging fury against them I persecuted them even to foreign cities’ (Acts 26:11).

Saul belonged to the tribe of Benjamin. It is interesting to note the ancient prophecy of the Jews’ ancestor Jacob. Describing the character of Saul’s tribe he said ‘Benjamin is a ravenous wolf, in the morning devouring the prey and at evening dividing the spoil’ (Genesis 49:27).

‘Saul was ravaging the church, and entering house after house, he dragged off men and women and committed them to prison’ (Acts 8:3). Having wreaked havoc in Jerusalem, he obtained permission to seek out Christians in Damascus. Damascus is said to be one of the oldest occupied cities in the known world. It was described as “a lovely white city in a green plain, a handful of pearls in a goblet of emerald”. In the First Century there were 10,000 Jews in residence and 40 synagogues.

His epic journey was about to begin, a journey which would change his life. God works in mysterious ways: who would have thought that in a short time this Christian persecutor would be joining them and preaching the Gospel of Jesus Christ, the one he wanted to eradicate?

The journey is approximately 150 miles, it would possibly take a week. But Saul in this angry mood would make shorter time with speed. Sensible travellers would rest at midday (Acts 26:13), but not Saul! Imagine him fuming, raging in himself, striding ahead of his group in his zeal.

Suddenly from the heavens came a blinding flash, a light above the brightness of the sun (Acts 26:13). ‘And falling to the ground he heard a voice saying to him, “Saul, Saul, why are you persecuting me?” And he said, “Who are you, Lord?” And he said, “I am Jesus, whom you are persecuting”’ (Acts 9:4–5). Can you imagine this amazing scene?

Saul went to conquer Jesus, but Jesus conquers him and brings him to his knees. He is blinded (v. 8), and now this raging persecutor is unable to do anything for himself.

Recounting the episode later Saul recalled further words of the Lord who spoke to him:

We can picture the scene of the farmer wielding his long pole with its sharpened iron end, to urge his animal along. If it kicks against the goad it is hurt and stops kicking—surely a picture of a man angered and wounded by his conscience. In his youth in Tarsus Saul may well have been familiar with this Greek poem:

“With God we may not strike, But to bow down the willing neck And bear the yoke is wise, To kick against the goads will prove perilous emprise.”

What were the goads he was kicking against? The wise words of Gamaliel? The speech of Stephen which had so angered the Jews that they had stoned him to death (Acts 7)? The daily example of the believers who did not resist arrest, and even gave their lives for their faith in this new religion?

The words of the wise are like goads, and like nails firmly fixed are the collected sayings; they are given by one Shepherd (Ecclesiastes 12:11).

It was now that Saul realised he had been fighting the will of the One Whom he worshipped. For him it was a total surrender. All his anger was gone. Instead of entering Damascus ahead of his company he was led by the hand (Acts 9:8); instead of giving orders, he was told what to do (v. 6).

Now there was a disciple at Damascus named Ananias. The Lord said to him in a vision, “Ananias.” And he said, “Here I am, Lord.” And the Lord said to him, “Rise and go to the street called Straight, and at the house of Judas look for a man of Tarsus named Saul, for behold, he is praying (Acts 9:10–11).

It is difficult to imagine how Ananias felt. He knew of Saul’s fearsome reputation and he protested, but the Lord reassured him (v. 15). So he went with confidence, and how wonderful it would have been to baptise Saul (v. 18). Possibly Saul now shared the ‘Lord’s supper’ for the first time (v. 19, see Luke 22:9).

It was now that this learned Pharisee realised what the prophets had foretold concerning the Messiah. He realised how wrong he had been. Having been commissioned to preach to the Gentiles, he would henceforth use his Roman name Paul rather than his Jewish name Saul. He dedicated his life to the service of his new master:

I thank him who has given me strength, Christ Jesus our Lord, because he judged me faithful, appointing me to his service, though formerly I was a blasphemer, persecutor, and insolent opponent. But I received mercy because I had acted ignorantly in unbelief, and the grace of our Lord overflowed for me with the faith and love that are in Christ Jesus (1 Timothy 1:12–14).

What an honour and privilege to be in the presence of the risen Lord and hear his voice. In his new life Paul suffered many of the things he had inflicted on Christians, and more besides.

Saul had set himself against Christ, but the Lord prevailed as he always does. Even while he was persecuting the Christians Saul was actually assisting the spread of this new teaching, because wherever the scattered believers fled and settled, there they preached the Gospel (Acts 8:4). Then when the time was right the Lord confronted him and converted him, and he became a fearless, tireless preacher, taking the Gospel far and wide throughout the Roman Empire. And he left a priceless wealth of letters which are preserved in the New Testament, which are invaluable for us today if we, like him, choose to turn from our old lives and follow the Lord.

If anyone else thinks he has reason for confidence in the flesh, I have more: circumcised on the eighth day, of the people of Israel, of the tribe of Benjamin, a Hebrew of Hebrews; as to the law, a Pharisee; as to zeal, a persecutor of the church; as to righteousness under the law, blameless. But whatever gain I had, I counted as loss for the sake of Christ. Indeed, I count everything as loss because of the surpassing worth of knowing Christ Jesus my Lord. For his sake I have suffered the loss of all things and count them as rubbish, in order that I may gain Christ and be found in him, not having a righteousness of my own that comes from the law, but that which comes through faith in Christ, the righteousness from God that depends on faith—that I may know him and the power of his resurrection, and may share his sufferings, becoming like him in his death, that by any means possible I may attain the resurrection from the dead.