I Am the Bread of Life 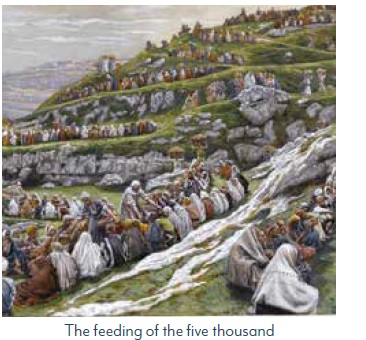 JOHN CHAPTER 6 contains the account of one of Jesus’ most amazing miracles. On the shore of the Sea of Galilee he fed 5,000 men, plus women and children, using only five loaves of bread and two small fish.

The miracle was so impressive that the people were fired with adulation, and the situation could have taken a turn which Jesus did not want. “Therefore when Jesus perceived that they were about to come and take him by force to make him king, he departed again to the mountain by himself alone” (John 6:15). It must have been a temptation for him to ride the wave of his popularity and use it for his self-gratification. He resisted the temptation and dealt with it, then retreated to be by himself where he could pray to his Father in heaven.

His solitary prayers gave him strength, and later that night we see another miracle. His disciples had left by boat to cross the lake, and he walked after them over the water to catch them up (verses 18–21).

They arrived in the town of Capernaum, and the following morning they met some of the people who had shared in the Feeding of the Five Thousand the day before. They were keen to see him, and probably they were after another miraculous feast. But the purpose of that feast had not been simply to fill their stomachs, it had been to teach them an important lesson. They had failed to see this. He said to them, “Most assuredly, I say to you, you seek me, not because you saw the signs, but because you ate of the loaves and were filled. Do not labour for the food which perishes, but for the food which endures to everlasting life, which the Son of Man will give you, because God the Father has set His seal on him” (vs. 26–27).

Jesus was ‘sealed’ by God his Father, which meant everything he did had the agreement and the authority of God, everything he said and did had his Father’s blessing.  Jesus’ words were truth and he therefore deserved to be heard and not only heard—but believed: “Jesus answered and said to them, ‘This is the work of God, that you believe in him whom He sent’”  (v. 29).

What was the lesson Jesus was keen to teach them?

“Do not labour for the food which perishes,” Jesus said. Their thoughts were on food.  Clearly, he had performed a very notable miracle, but the people who spoke to him could not see or understand its spiritual message. They said, “What sign will you perform then, that we may see it and believe you? What work will you do? Our fathers ate the manna in the desert; as it is written, ‘He gave them bread from heaven to eat’”

The ‘manna’ was the food which God provided for the nation of Israel as they walked through the desert to the Promised Land: the account is in Exodus 16. Jesus replied, “Most assuredly, I say to you, Moses did not give you the bread from heaven, but my Father gives you the true bread from heaven. For the bread of God is he who comes down from heaven and gives life to the world” (John 6:32–33).

This was the spiritual meaning of what Jesus did when he fed them the previous day. In their journey through the wilderness God had given His people miraculous bread to sustain them; now He has provided another miraculous feast to sustain all of His people in their journey of life. “And Jesus said to them, ‘I am the bread of life. He who comes to me shall never hunger, and he who believes in me shall never thirst’” (v. 35).

Jesus knew there were a few in his audience who did believe in him. He said, “All that the Father gives me will come to me, and the one who comes to me I will by no means cast out. For I have come down from heaven, not to do my own will, but the will of Him who sent me. This is the will of the Father who sent me, that of all He has given me I should lose nothing, but should raise it up at the last day”

He is the Messiah and he will raise the faithful (who endure to the end), from the dead and give them eternal life.

But there were many listening who did not like what he was saying. “The Jews then complained about him, because he said, ‘I am the bread which came down from heaven.’ And they said, ‘Is not this Jesus, the son of Joseph, whose father and mother we know? How is it then that he says, “I have come down from heaven”?’” (vs. 41–42).

Jesus said he came down from heaven, in the same way that the manna in the wilderness came from heaven—it was given by God. They thought he was saying that he had actually descended from heaven.

He spelled out for them the spiritual meaning of what he was telling them: “Most assuredly, I say to you, he who believes in me has everlasting life. I am the bread of life. Your fathers ate the manna in the wilderness, and are dead. This is the bread which comes down from heaven, that one may eat of it and not die” (vs. 47–50).

The manna which God gave His people in the wilderness was an illustration of Jesus. Jesus is the true bread, the bread of life.

Still his hearers didn’t understand. “The Jews therefore quarrelled among themselves, saying, ‘How can this man give us his flesh to eat?’” (v. 52).

Jesus continued. He made it clearer for them, but not easier:

“Then Jesus said to them, ‘Most assuredly, I say to you, unless you eat the flesh of the Son of Man and drink his blood, you have no life in you. Whoever eats my flesh and drinks my blood has eternal life, and I will raise him up at the last day. For my flesh is food indeed, and my blood is drink indeed. He who eats my flesh and drinks my blood abides in me, and I in him… This is the bread which came down from heaven—not as your fathers ate the manna, and are dead. He who eats this bread will live for ever’” (vs. 53–58).

Still they could only take him literally, and they were appalled. Even some of his own followers were perplexed: “Therefore many of his disciples, when they heard this, said, ‘This is a hard saying; who can understand it?’”

So Jesus explained: “When Jesus knew in himself that his disciples complained about this, he said to them… ‘It is the spirit who gives life; the flesh profits nothing. The words that I speak to you are spirit, and they are life’”

There were two types of people listening: those who tried to appreciate the spiritual meaning of what he was saying, and those who did not.

To be a follower of Jesus Christ means to feast on him, spiritually. To absorb him into your life, and be nourished by him. This is done by watching and listening to the things he did and said, as we read about them in the Bible, thinking on him, and prayerfully allowing him to change us. And the key part of this process is the feast which his followers share, which is sometimes called the ‘communion’ or ‘memorial feast’ or ‘love feast’.

On the evening before he died, Jesus shared his last supper with his disciples.

Then he took the cup, and gave thanks, and said, “Take this and divide it among yourselves; for I say to you, I will not drink of the fruit of the vine until the kingdom of God comes.”And he took bread, gave thanks and broke it, and gave it to them, saying, “This is my body which is given for you; do this in remembrance of me.” (Luke 22:17–19).

This ‘feast’ has been kept ever since by Jesus’ followers, in obedience to his command. It’s a time to remember him and the sacrifice he made, and taste again the joy of forgiveness and ‘communion’ with God that Jesus’ sacrifice enables. Evidence suggests that in the early church the feast was held on the first day of each week, and this is still the common practice.

When a person is baptised, they have taken the first step in committing their lives to Christ. From then on, they must feed on him, and that’s how they grow. It’s a lifelong process, and the central part of it is the memorial feast.

Those who faithfully do this can echo the words of the Apostle Paul:

Finally, there is laid up for me the crown of righteousness, which the Lord, the righteous Judge, will give to me on that Day, and not to me only but also to all who have loved his appearing (2 Timothy 4:8).