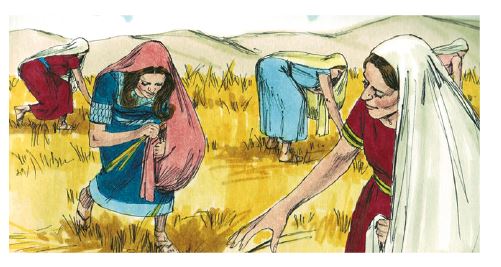 The Gospels of Matthew and Luke give lists of the ancestors of Jesus Christ. Only five women are mentioned. These were all very special individuals. In this series we’re looking at them in turn—this month we consider Ruth.

LIKE RAHAB before her, Ruth was not a Jewess. She comes into the Bible story when she married into a Jewish family who had left their Promised Land.

Elimelech and his family lived in Bethlehem. When a famine struck the land of Israel, it seems Elimelech didn’t trust God to preserve them in their Promised Land, and so he took Naomi his wife and his two sons to the land of Moab.

He died in Moab. His two sons married local girls, and then sadly the two young men also died, leaving Orpah and Ruth, and their mother-in-law Naomi. When news arrived from Israel that God had ended the famine Naomi decided to return home, and initially her two daughters-in-law started the journey with her. Orpah turned back but Ruth very firmly showed that she had adopted Israel’s God, and no longer felt herself to be an outsider: “Wherever you go, I will go; and wherever you lodge, I will lodge; your people shall be my people, and your God, my God” (Ruth 1:16).

Some Bible readers have found a difficulty in the fact that in Deuteronomy 23:3 God prohibited a Moabite from joining the nation of Israel for up to ten generations—but there’s no problem here, as Ruth clearly signalled her total faith in Israel’s God, and that she was no longer a Moabitess, but now an Israelite at heart.

So Naomi and Ruth walked the long road back to Bethlehem, and arrived just when the barley harvest was starting. Ruth offered to go and glean grain in the harvest fields, and by a divine ‘coincidence’ found the field of Boaz, a relative of Naomi. He welcomed the foreign girl, and told her to stay with his servants until the end of harvest.

The harvest continued for about seven weeks (in the Jewish calendar 50 days from the Feast of Firstfruits until Pentecost). And that was when Naomi unveiled her plan. She told Ruth that as a very close relative Boaz could redeem the property that had belonged to Elimelech. Her plan was that Ruth should go to the threshing floor where Boaz would sleep that night, and ask for his protection and help. Ruth did just as Naomi had said, and Boaz straight away offered to do as she asked.

There was a man who was an even closer relative than Boaz. Next morning Boaz found him, and explained that he could redeem Naomi’s field. If he did this he would also have to marry Ruth (this procedure was laid down in the Law of Moses in Deuteronomy 25:5).

The close relative was willing to redeem the land, but not to marry Ruth, and so he left the way open for Boaz. What a most wonderful demonstration of the hand of God at work!

Elimelech didn’t trust God and left the Promised Land, but Boaz his kinsman did trust God. He was a very successful farmer despite the famine. In the inspired record in Ruth 4 the close relative is not named, although his excuse was “I cannot redeem it for myself, lest I ruin my own inheritance” (Ruth 4:6). There’s a lesson for us here. One man was totally wrapped up with preserving his name and possessions—but the Bible does not name him! Boaz, on the other hand, who was willing to raise a family with Ruth in Elimelech’s name, finds himself as the named next of kin: Salmon, Boaz, Obed, Jesse, David (Ruth 4:21–22).

What a great blessing Ruth received: she had the offer of marriage from the rich farmer, and became an ancestor of King David and Jesus himself. What a complete change of life!

Naomi lived in Bethlehem before she emigrated to Moab. The name Bethlehem means ‘House of bread’, so in a way we could say that when the famine started there was no bread in the house of bread. Then, after quite a long while Naomi returned to Bethlehem with Ruth her daughter in law. Now there was a good harvest, so once again there was bread in Bethlehem, and Boaz the farmer provided that grain for producing the bread.

Over a thousand years later Jesus Christ was born in that same town, and he actually gave us that wonderful verse “I am the bread of life” (John 6:35). Baptised followers of Jesus eat the bread and drink the wine which are symbols of his death (Luke 22:19–20). He is their bread of life.

There is another lovely picture here: Boaz represents Jesus, born in Bethlehem. Ruth represents you and me, if we leave our old way of life and come to him. He is the bridegroom, and we are the bride.