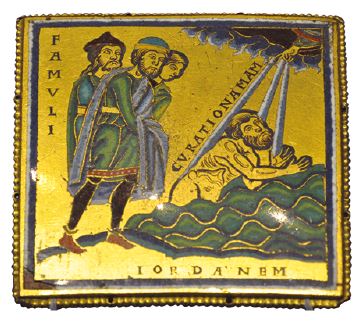 IF YOU WANT TO belong to God, you need to be baptised. Jesus Christ said so:

One of the brilliant things about the Bible is that it doesn’t just tell you things—it shows you pictures as well! We’re going to look at three pictures that illustrate what baptism means.

Right back near the beginning, the world’s population had grown so wicked that God determined to destroy them all. The account is in Genesis chapter 6. Only Noah and his family were faithful to God. God told Noah to build a massive boat, to save his family and a stock of animals that would repopulate the earth. Then God sent a cataclysmic flood which washed away everybody and everything else.

Jesus Christ and his disciples used the story of Noah and the Flood to teach several things. This is from a letter of the Apostle Peter:

… Once the Divine longsuffering waited in the days of Noah, while the ark was being prepared, in which a few, that is, eight souls, were saved through water. There is also an antitype which now saves us—baptism (not the removal of the filth of the flesh, but the answer of a good conscience toward God), through the resurrection of Jesus Christ

Baptism is an ‘antitype’ of the Flood. That’s an odd word, what does it mean? It means that the Flood was a picture of baptism. Just as the Flood washed away the earth’s wickedness and prepared it for a new start, so baptism shows that we want to turn our back on our old life, and start afresh.

The next book in the Bible is Exodus, and it tells how God saved the young nation of Israel from slavery in Egypt. He brought them all out in a single night, leading them by a cloud of fire. The account is in chapter 14. The Egyptian army chased after them and cornered them on the shore of the Red Sea. God told Israel’s leader Moses to raise his staff over the sea, and miraculously the sea parted. The Israelites passed through the sea on dry ground, but when the Egyptians tried to follow the sea flooded back and swept them away.

Moreover, brethren, I do not want you to be unaware that all our fathers were under the cloud, all passed through the sea, all were baptized into Moses in the cloud and in the sea… (1 Corinthians 10:1–2).

Paul goes on to point out that the experience of the nation of Israel was a picture of the experience of every person who chooses to follow Christ: God brings them out of their life of slavery to sin and sets them free, and they then journey through life towards the Promised Land. Israel journeyed to Canaan, the Christian journeys to the Kingdom of God. The journey starts with baptism, where the old slave-master is washed away and God becomes our master.

2 Kings 5 tells the story of Naaman, the commander of the Syrian army, who had leprosy—a horrible disease for which there was no cure and which would eventually kill him. But he heard that the God of Israel could cure him. So he came to Israel to the prophet Elisha. Elisha told him to go and dip himself in the River Jordan seven times. Naaman was furious—he was a proud man, he wasn’t prepared to do something so demeaning. But then he came to his senses. He swallowed his pride and obeyed, and he was cured.

The Bible does not point it out, but it’s obvious—this was a picture of baptism!

So we’ve seen three pictures the Bible paints of baptism: it’s washing away godlessness from our life and starting afresh; it’s the start of our journey towards the Kingdom; it requires humility and obedience.

And did you notice that the three pictures we’ve looked at all come from the Old Testament? That’s the first part of the Bible which was written before the time of Jesus. Baptism is a New Testament thing: in Old Testament times you didn’t need to be baptized in order to belong to God. But we’ve seen how God put these pictures in the history of the Old Testament, in order to show you and me what He wants us to do. Isn’t God amazing!