The Temple of God 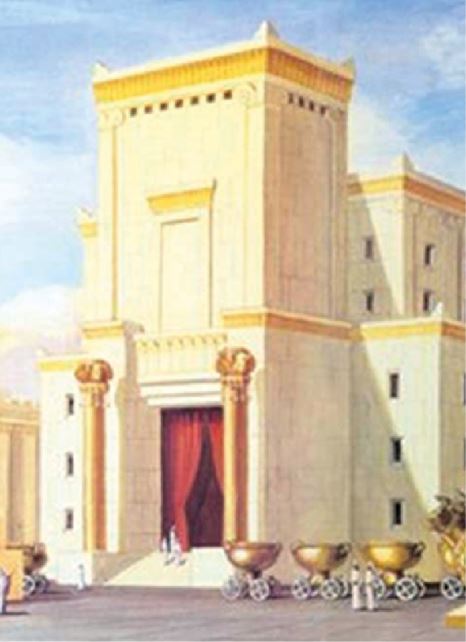 It was King David who originally proposed to build a temple (or ‘house’) for God (the account is in 2 Samuel 7). God explained to him through Nathan the prophet that he would not be the one to build the house, it would be his descendant. Also, by means of his descendant God would build a house for David!

The initial fulfilment of this promise was through Solomon, David’s son. Having been forbidden to build the temple himself David responded excellently and ‘made abundant preparations before his death’ (1 Chronicles 22:5), and Solomon built the temple. But Solomon did not wholly fulfil the promise: his throne was not established for ever, his dynasty only lasted a few hundred years.

The New Testament of the Bible reveals how the ultimate fulfilment of God’s promise to David was through Jesus Christ. Jesus was a descendant of David (Matthew 1:1, Romans 1:3). He is of the royal line, and when he re-establishes the Kingdom of God he will reign on David’s throne

Through his life, death and resurrection, Jesus has made possible the construction of the figurative House of God—not a physical building, but a spiritual building for the glorification of God, a building made not of stones but of people! This wonderful teaching was foreshadowed in the house which Solomon built.

1 Kings 5 describes Solomon’s preparations for building the temple. “And the king commanded them to quarry large stones, costly stones, and hewn stones, to lay the foundation of the temple” (1 Kings 5:17). Later the prophet Isaiah drew on this same language: “Behold, I lay in Zion a stone for a foundation, a tried stone, a precious cornerstone, a sure foundation” (Isaiah 28:16).

Isaiah was not talking about Solomon’s temple. His words are quoted by the Apostle Peter, who reveals that it is a prophecy of Jesus Christ:

Coming to him as to a living stone, rejected indeed by men, but chosen by God and precious, you also, as living stones, are being built up a spiritual house, a holy priesthood, to offer up spiritual sacrifices acceptable to God through Jesus Christ. Therefore it is also contained in the Scripture, “Behold, I lay in Zion a chief cornerstone, elect, precious, and he who believes on him will by no means be put to shame” (1 Peter 2:4–6).

There is a spiritual temple of which the Lord Jesus Christ is the ‘chief cornerstone’, the principal stone that was put in place at the beginning of construction work and which governed the setting out of the entire building. And his followers are the stones which are built around the cornerstone. Together they make up the temple of God.

The wonderful privilege of being part of the Temple of God comes with great spiritual responsibilities:

And what agreement has the temple of God with idols? For you are the temple of the living God. As God has said: “I will dwell in them and walk among them. I will be their God, and they shall be My people’ (2 Corinthians 6:16).

As the Temple was built for the glory of the God of heaven, that is the aim of the follower of Jesus: “For you were bought at a price; therefore glorify God in your body and in your spirit, which are God’s” (1 Corinthians 6:20).