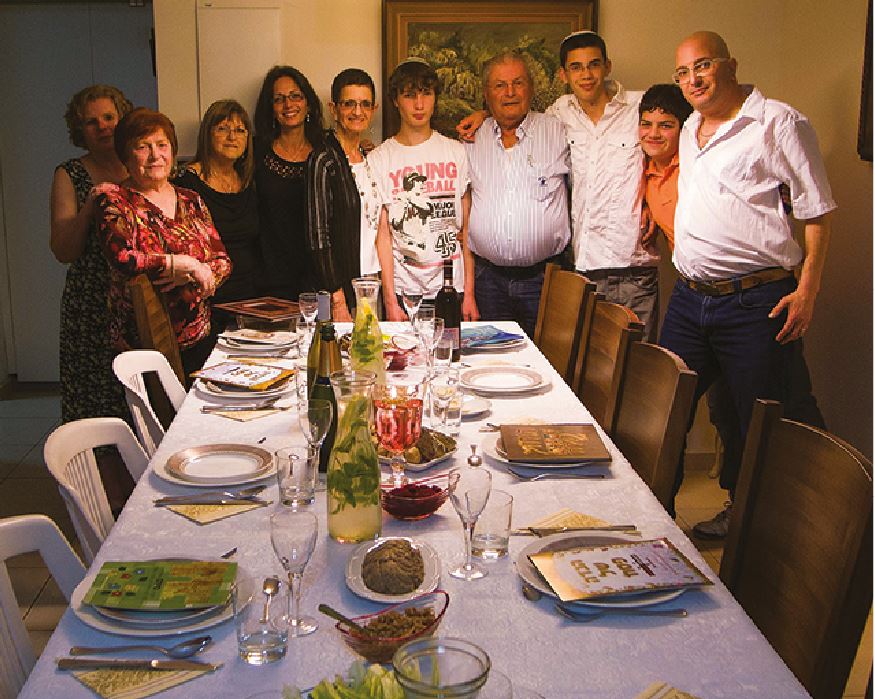 ONE NIGHT EVERY YEAR, close to Easter, Jews all over the world observe the feast of Passover. It’s a ceremony which dates back three and a half thousand years to the nation’s deliverance from slavery in Egypt, which is recorded in Exodus chapter 12.

For a week beforehand they sweep their houses clean of every crumb of bread, for no food made with yeast may be left in the home on Passover night. At the appointed time, the whole family gathers round the supper table, and the ancient ceremony begins. Before them on a clean white cloth are spread wafers of dry, unleavened bread, just like their ancestors ate on the first Passover night. There is also a bowl of salt water to stand for the tears they shed In Egypt. Bitter herbs represent their cruel bondage, and a dish of fruity paste recalls the clay from which they once made bricks for their Egyptian taskmasters. In the old days they would also eat the roasted Passover lamb.

During the service of hymns and prayers that goes with the meal there is one dramatic moment when, by a long tradition, the youngest person present enquires aloud “What do you mean by this service?” This is the cue for the oldest member of the family to tell again the moving story of how God delivered their forefathers from Egypt, and brought them on their way to the Promised Land. It does not take long to recount, but it stirs the blood of every Jew, for on that great night over thirty centuries ago the history of the nation of Israel began.

It may seem strange today when we see Israel and Egypt side by side as uncomfortable neighbours, to remember the connection between the two peoples goes back so far into history. It will seem even stranger when we look into the story. We find that a helpless, unarmed nation of slaves set off one spring night for freedom and a land of their own. We may be sceptical that such an event could happen at all. Yet the stubborn fact is that Jews throughout recorded history have kept this feast, year after year in unbroken succession, complete with its strange ritual and its dry, unleavened bread. It must have started somewhere, to make such a lasting impression on the nation. It certainly bears investigation. With the help of the Bible, in this series we will unravel the story of their escape from Egypt and the journey to the Promised Land.

Like all successful rebellions, the Exodus began with a great leader. At God’s direction it was Moses who took on the role of deliverer, representing the people before Pharaoh the Egyptian king and leading them to freedom, then bearing the burden of their complaints and fears across the harsh wilderness for 40 years. So mighty a statesman and lawgiver was he, that a thousand years later in the time of Christ he was still revered as the mouthpiece of God.

The story of the man is remarkable. If ever God raised up the right man at the right time, Moses has that distinction. He was born into a poor home in one of the smaller tribes of Israel, at a time when the national fortunes were desperately bad. It was a problem that is perhaps familiar to us. An immigrant population was growing more rapidly than that of the host country and beginning to threaten their way of life. There were no attempts to come to terms with the situation amicably and reasonably, and no Race Relations Boards to solve the differences. Pharaoh king of Egypt decreed that the Israelites should be enslaved and used to build his enormous treasure cities and public works. When that failed to make an impression on their numbers, he settled on a solution of Hitler- like ferocity. Every male child was to be drowned at birth.

So it was that when Moses’ mother-to-be announced to the family that she was expecting a baby, the news was received with mixed feelings. What if it should be a boy? Nine months crept by. As her time drew near, we can imagine her husband Amram grew irritable and haggard with worry. Nightly, the family would pray together that the baby would be a girl. When eventually the hour came, and the midwife turned to the anxious husband and whispered that it was a boy, he and his wife would be numb with shock and grief. God had not answered their plea. Everything had gone wrong.

There must have been something striking about Moses as soon as he was born. The Bible states that his mother “saw that he was a beautiful child” (Exodus 2:2). In the New Testament the martyr Stephen adds that the baby was “well pleasing to God” (Acts 7:20). Whatever it was about him that stole their hearts, his parents decided to risk the wrath of the authorities and conceal the birth of the child. For many weeks his mother nursed him, and his brother and sister suppressed their excitement as best they could. But with the passing of time, his cries grew stronger, and his mother’s confinement to her home became more and more suspicious. Eventually, they realised they could keep their secret no longer. With tearful resolution they decided to stake everything on one desperate adventure. They would obey Pharaoh. Moses would indeed be cast into the river. But they would put him in a waterproof cradle first. Then they would float the precious little boat close to the steps where Pharaoh’s daughter came down to bathe. It was an act of courage, for the child could easily have been found by a hard-hearted Egyptian. Or his little ark could have been overturned in the currents and lost.

We can imagine the loving care with which that basket was woven and sealed with pitch, and the shaking hands that nestled the baby into his tiny ark. “By faith,” says the writer to the Hebrews, “Moses, when he was born, was hidden three months… and they were not afraid of the king’s command” (Hebrews 11:23). Amram and Jochebed believed that if they threw themselves on the mercy of God, He would bless them and prosper their plan. He had given them a boy, and He had kept them safe for 12 weeks. Now they would leave their baby in His hands. They did all they could to help themselves, but when they ran out of resources, they left the outcome to God.

The fact that Amram and his wife did believe in God is more remarkable than it sounds. Israel’s spiritual health had sunk very low in that land of idols. Later, they would even need to be reminded of the name of the God their fathers had worshipped (Exodus 3:13–15). It is likely Moses’ parents were among a faithful few in the nation who continued to worship the Lord.

At any rate, their stratagem worked perfectly. Pharaoh’s daughter spotted the strange basket floating in the river, and curiosity impelled her to look Inside. As daylight fell on to the baby and strange faces peered down at him, he began to cry. Instantly the princess’s maternal instincts were aroused. “This Is one of the Hebrews’ children” she said (Exodus 2:6). She did not have the heart to throw him back into the water to drown, yet she could not think what to do with him. Just at that moment Miriam his sister appeared, and offered to fetch a suitable Hebrew nurse. The nurse, of course, turned out to be Moses’ own mother. The whole episode ran so smoothly it might have been rehearsed. The outcome was that Moses started off life in the house of his faithful Israelite family. He was eventually transferred to the royal household, where he was brought up as Pharaoh’s daughter’s adopted son (Acts 7:21). In this way he knew both the hardship of the slave life of the Hebrews, and the sophistication and luxury of the court. More importantly, because he was “learned in all the wisdom of the Egyptians” (Acts 7:22), he became the ideal person in later years to conduct negotiations with the Egyptians. It was just as if Moses’ career plan had been mapped out for him, like a management trainee in a giant organisation. But neither he nor anyone else knew what was happening at the time. It was God who was working unseen in the circumstances of his life, shaping him for his destiny.

Perhaps there is a lesson here we can take to heart. We may not be ambitious, or consider ourselves worthy of great responsibilities, yet undoubtedly God can control our lives if we believe in Him. He will put us through tests, correcting and exercising our judgment, preparing us for work He has in mind for us—if not now, then in His Kingdom.

This thought may comfort us if we feel our present situation is hard and unrewarding. Listen to these inspired words from the book of Hebrews: “For whom the Lord loves He chastens, and scourges every son whom He receives. If you endure chastening, God deals with you as with sons” (Hebrews 12:6–7). And the Apostle Paul: “We know that all things work together for good to those who love God, to those who are the called according to His purpose’ (Romans 8:28).