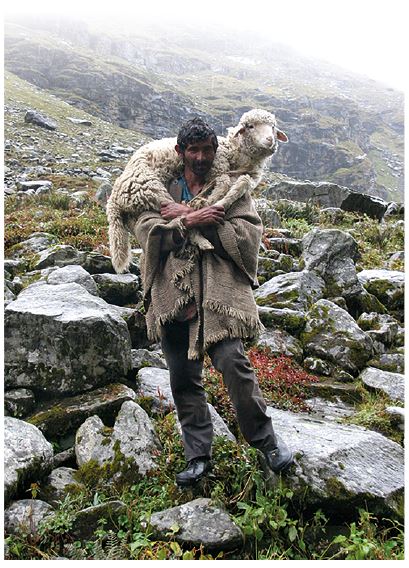 The Gospel of John records a number of sayings of Jesus which begin “I am…” In this series we think about some of the profound things he said about himself.

IN JOHN chapter 10 Jesus presents a detailed parable in which he is represented by a shepherd, and his disciples are his sheep.

Most assuredly, I say to you, he who does not enter the sheepfold by the door, but climbs up some other way, the same is a thief and a robber. But he who enters by the door is the shepherd of the sheep. To him the doorkeeper opens, and the sheep hear his voice; and he calls his own sheep by name and leads them out. And when he brings out his own sheep, he goes before them; and the sheep follow him, for they know his voice. Yet they will by no means follow a stranger, but will flee from him, for they do not know the voice of strangers (John 10:1–5).

The picture is of the traditional Middle Eastern sheepfold which is an enclosure with high stone walls and a single opening. When the sheep were inside one of the shepherds would guard the opening to keep them safe from wild animals and thieves. In this parable Jesus is the good shepherd, the sheep are his disciples, and the doorkeeper is God.

Jesus then develops the parable to present himself as the door itself—the fold would not have a physical door, the shepherd standing guard would be the ‘door’:

Then Jesus said to them again, “Most assuredly, I say to you, I am the door of the sheep. All who ever came before me are thieves and robbers, but the sheep did not hear them. I am the door. If anyone enters by me, he will be saved, and will go in and out and find pasture” (vs. 7–9).

Jesus is “the door of the sheep”—the sheep could only go in and out of the fold through him, there is no other way. As he said on another occasion, “I am the way, the truth, and the life. No one comes to the Father except through me” (John 14:6).  Anyone who tries to get into the sheepfold by a different way has no place in his fold. These may be people who claim to be Jesus’ followers but do not really follow him. The only way into the fold is to hear and obey the Gospel message.

There are warnings in the Bible about people who will try to get into the flock who are not really Jesus’ followers. For example the Apostle Paul said to the elders of the Ephesian church, “For I know this, that after my departure savage wolves will come in among you, not sparing the flock. Also from among yourselves men will rise up, speaking perverse things, to draw away the disciples after themselves” (Acts 20:29–30).

“I Lay Down My Life”

The parable continues: “I am the good shepherd; and I know my sheep, and am known by my own. As the Father knows me, even so I know the Father; and I lay down my life for the sheep” (John 10:14–15).

Jesus’ sheep are those who listen to him, obey and follow him. It follows that those who do not follow him are not his sheep. But for those who are his sheep, he has performed the ultimate act of love. Only the most dedicated shepherd would lay down his life to save his sheep from harm. Jesus’ mission was to be the sacrifice for the forgiveness of sins: “the Lamb of God who takes away the sin of the world” (John 1:29).  He did just that, he died on the cross, the third day he rose again to eternal life and he is now in heaven waiting to return and give eternal life to his flock.

He continues: “And other sheep I have which are not of this fold; them also I must bring, and they will hear my voice; and there will be one flock and one shepherd” (v. 16).

The sheepfold was primarily for the “lost sheep of the house of Israel” (Matthew 15:24), but Gentiles (non-Jews) can also enter it if they respond to the Gospel call

Jesus Christ is assembling his flock by calling people from all nations and all ages—people who listen to his voice and follow him. Will you be one of them? Are these words for you:

Do not fear, little flock, for it is your Father’s good pleasure to give you the kingdom