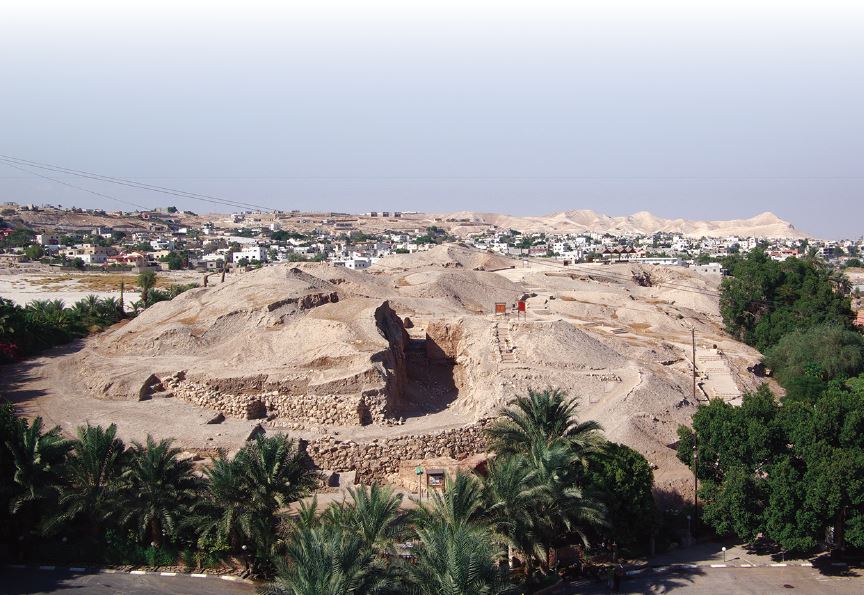 The Gospels of Matthew and Luke give lists of the ancestors of Jesus Christ. Only five women are mentioned. These were all very special individuals. In this series we’re looking at them in turn—this month we consider Rahab.

THE ACCOUNT of Rahab is a really lovely story of faith and works. This is, she not only had faith in God, she put that faith into action. The story is recorded in Joshua chapters 2 and 6.

The Israelites were poised to enter the Promised Land, after their escape from Egypt and their journey through the wilderness. Joshua their leader sent two men over the River Jordan to spy out Jericho, which would be their first city to conquer. The spies entered Rahab’s house, built on the city walls, as it probably had an entrance close to the city gate. Many cities in Bible days had very wide walls, often having an inner and outer wall of brick or stone and the cavity filled with rubble. It was quite usual therefore for houses to be built ‘on the city walls’.

Rahab is known in the Bible as ‘Rahab the harlot’. She probably ran a sort of lodging house. The spies possibly thought they could be anonymous there until they could further search out the city. But the men had been spotted, and Rahab was challenged by the king’s messengers to bring out the spies. She whisked the spies up to her flat roof and hid them under the bundles of flax drying there. She then sent the king’s men off in the wrong direction, so that she could save the spies’ lives.

She told the spies of her faith in Israel’s God, and that she fully realised that Israel would conquer the country (see Joshua 2:8–13). This provides us with a wonderful statement of her faith, which without doubt showed the Jewish spies the depth of her belief in Israel’s God. They agreed to save her and her family alive when they came to conquer Jericho, provided she tied a red cord in her window to help them identify her house, and she had to keep all her family in her house (2:17–20). She let the spies down through a window on the outside of the wall, and they safely returned to Joshua and the camp.

If Rahab was a practising harlot, or prostitute, that would almost certainly change if she had to bring her parents into her house on the wall, while they waited for Israel’s soldiers to come and take the city. So she showed her faith and her works. From then on she was a totally reformed character.

After the people of Israel crossed the River Jordan and entered the Promised Land, they camped for several days, then at God’s direction the armed men walked around Jericho’s walls once a day for six days in complete silence. The priests carrying the holy golden box called ‘the ark’ followed the army, and the only sound was seven priests blowing trumpets.  On the seventh day they marched around the city seven times, and at the signal from Joshua they all shouted at the top of their voices, and the city walls fell down. The army could then go straight ahead and capture the city.

God’s invisible knife cut through the walls either side of Rahab’s house, so that hers was the only part of the wall left standing. The spies did not need the red cord in her window—only one house remained!

What a terrifying suspense must have built up inside the city. The inhabitants would have had no idea what this walking around their walls would mean. You can imagine the tension growing each day as the army walked in silence around their walls, but I suspect the tension would be worse in Rahab’s house, built on the wall itself. She must have been a very persuasive person, insisting that all her relatives never went down the stairs and out into the street.

Jericho was the first city to be conquered by Israel when they entered the Promised Land. God’s law stated that the ‘firstfruits’ of people, animals and harvest were to be devoted to God (Deuteronomy 26:1–11), so Jericho was burnt to the ground (and by implication given to God) as the firstfruits of their new country.

Joshua had told the two spies to go and rescue Rahab and her family, and to bring them to safety. She had kept her part of the agreement, and demonstrated once again her complete trust in Israel’s God. She was adopted into the nation of Israel, and according to Matthew 1:5 she married Salmon—who was possibly one of the spies that went to her house. She is there in the line of David, and Jesus Christ, obviously having completely turned away from her previous way of life.