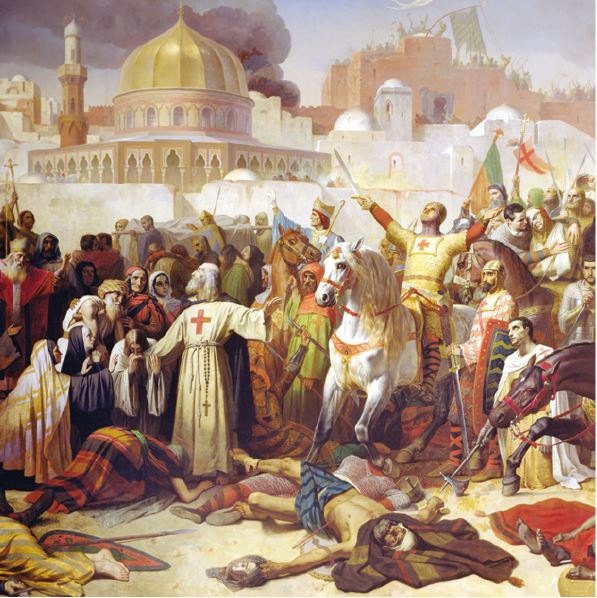 “Christianity preaches ‘Love your enemies’—but what about the crusades, inquisitions, persecutions and wars that have been conducted in its name? When you think of all the violence that religion is responsible for, is it any wonder that people turn away from it?”

WHAT CAUSES war and conflict? There are many factors, including economic, ethnic, territorial, political, sociological and religious. To simply blame religion and leave it at that is far too simplistic and crude; it is not real analysis and it is not a real answer.

To illustrate this, let’s consider two alternatives. Wars sometimes result from differences of political opinion—so should we say ‘politics causes wars’? Does that mean human beings should therefore abandon politics because politics is ‘bad’? Again, wars often result from economics—they are fought over resources such as land, oil, water and so on. So should we say ‘economics causes wars’?  If no one would make this claim (and they surely wouldn’t), then is it fair to say ‘religion causes wars’?

The common factor in wars is that they involve human beings—there is something in human beings (whether religious or not, and from whatever part of the political spectrum they may come) which erupts from time to time in violent conflict. What is this aggression that can drive us, this lust for power, this territorial greed, this longing for conquest? It is here, in fact, that Christianity gets at the heart of the problem in its understanding of human nature. Christianity explains what is wrong with human nature, and if this explanation is correct then it is no surprise that human history has been in part a history of conflict. It began in the very first family, when Cain murdered his brother Abel (Genesis 4:8) and it has ravaged the human race ever since.

Atheism and humanism provide no such explanation as to why human history should be like this. In this sense, then, Christianity has the explanation for all war, one which is arguably more credible and powerful than that provided by any other worldview.

Religion is Just an Excuse

Nevertheless, it has to be admitted that there are many wars which have been explicitly conducted in the name of religion, or where religious differences are one of the factors causing underlying tension.  Surely religion is to blame for these and is therefore evil? The question therefore remains: is it true that religion in general or Christianity in particular is indeed ‘responsible for so many of the wars and conflicts in the world’?

It is interesting to look at the data here. There is a standard work on the history of war called The Encyclopaedia of Wars.1 It is a huge work of three volumes which analyses and categorises 1763 conflicts between 8000bc and 2003ad. It finds that less than 7% of the wars it considers can be classified as primarily religious conflicts, and many of those 7% actually have more to do with politics and secular motivations than they do with religion.

Even some of the most frequently cited examples of religious war such as the Crusades—the series of wars waged in the Middle Ages by Christian churches against Muslims in the Middle East—are far less clear-cut than they appear. For instance the book Silk Roads—A New History of the World 2 suggests that during the period of the Crusades religion was often merely a pretext for what was really a campaign for political power, economic gain and personal aggrandisement. It is far too simplistic to categorise the Crusades as ‘religious wars’, even though religious labelling was very prominent as the leaders sought to bring God on to their side to justify their territorial ambition. The foot-soldiers may indeed have been told that they were fighting a religious war, but those who controlled them seem to have had additional or in some cases very different motivations.

It is a grave concern to those who advocate the ‘religion causes intolerance and war’ view that some of the most devastating atrocities committed against human beings have been those carried out by atheist regimes. We need only think of Stalin’s 20 million victims in Communist Russia or Mao’s 40 million victims in Communist China, or even the scientific and evolutionary arguments that were

(mis)used by nominally-Christian Adolf Hitler to justify the genocide he conducted in Nazi Germany and its territories. These are terrible enough, but this list is far longer. Indeed, when the journalist and erstwhile communist Peter Hitchens converted to Christianity it was largely because he was so appalled by the atrocities committed in the name of atheism.3 The theologian Alister McGrath comments perceptively: “The 20th Century gave rise to one of the greatest and most distressing paradoxes of human history: that the greatest intolerances and violence of that century were practised by those who believed that religion caused intolerance and violence.” 4

A very different study was carried out by the scholar Robert Pape who analysed every instance of suicide bombing that he could find since 1980. There is a preconception that suicide bombings are carried out by religious extremists, and the assumption therefore is that religion carried to its logical conclusion must be evil. Pape found, however, that there was little evidence that religion has been a key driver of suicide bombings and that there is little connection with the religious underpinnings of Islamic fundamentalism. Instead he found that political aims were the key motivation. Suicide bombers are more likely to be unempowered people who believe their territory to be occupied or who are oppressed and feel that this drastic and horrifying act is their only way to make their cause heard. 5

The argument against religion on the grounds that it causes violence and war is also unfairly one-sided. While attacking religion for all the violence it allegedly spawns, this approach usually disregards all the good that has been done all down the centuries in the name of religion—and in the name of Christianity in particular.

We cannot truly evaluate the role Christianity and religion have played in society without considering the positives as well as the negatives—the welfare that has been provided with no expectation of anything in return, the education that has been given, the hospitals that have been set up. If we are going to make sweeping claims about religion in society we have an obligation to be even-handed with the evidence.

Like many atheist claims, the argument that religion causes wars simply does not hold water. It sounds superficially powerful, but once it is unpacked and examined there is little of substance to build a case. It is a claim which is too vague to be meaningful, and unsupported by evidence.

3 described in Peter Hitchens, The Rage Against God, publisher: Continuum