Jesus in the Book of Acts 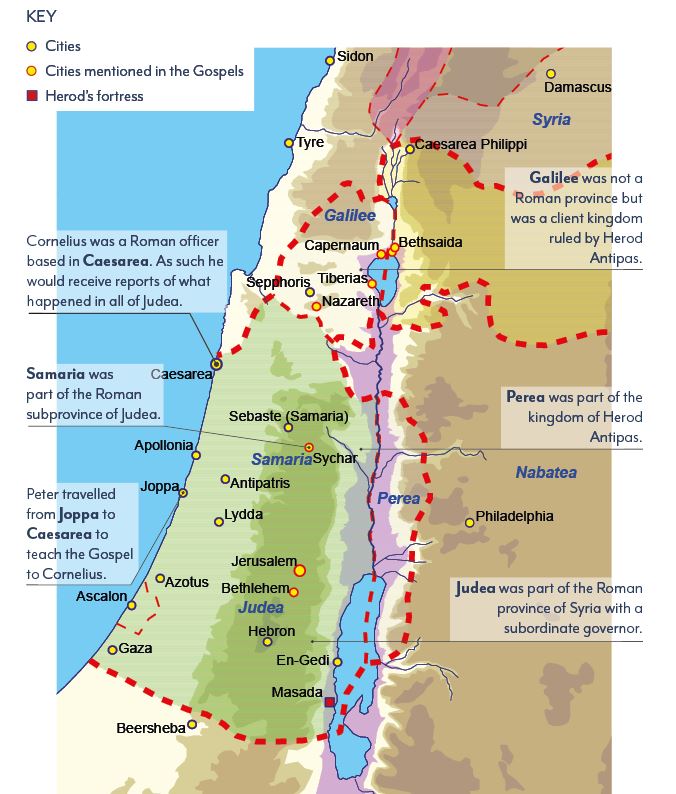 This is the tenth and final article in a series in which we examine this fascinating Bible book. You can catch up with the previous articles at

JESUS IS THE central figure of Christianity, and he appears throughout the whole of the Bible, both in the Old Testament (as the promised Messiah) and of course in the New Testament which revolves around his life and teaching. The Acts of the Apostles is the account of the activities of the church after Jesus rose from death and ascended to heaven. In Acts Jesus is spoken of by the apostles, and he also speaks to them on occasion. The teaching of the apostles about Jesus is strikingly different from the teaching of many modern churches.

The picture of Jesus in the apostles’ speeches is very consistent, from the speech of Peter at Pentecost (Acts 2) to the defences of Paul to high Roman officials in the later chapters.

The most detailed account of Jesus’ ministry appears in Acts 10, when Peter explains about Jesus to Cornelius, who is a Roman centurion in Caesarea. These are some of the points that he makes.

“That word you know, which was proclaimed throughout all Judea, and began from Galilee after the baptism which John preached” (v. 37). This is something of a mistranslation: it should read something like “You have heard reports of what happened throughout Judea, beginning in Galilee.” Peter refers to Cornelius’ prior knowledge of Jesus. Cornelius was an officer in the Roman army and would receive intelligence reports of what was happening in the Roman province of Judea—but much less about what happened in Galilee, which was not a Roman province.

“Jesus… went about doing good and healing all…” (v. 38). This tells us of the actions of Jesus, who for around three years taught and healed in Judea and in Galilee. Cornelius would have known something about this.

“And we are witnesses of all things which he did both in the land of the Jews and in Jerusalem” (v. 39). The apostles are able to claim that they were eyewitnesses of Jesus’ actions. This is a constant theme in the New Testament: the reports of Jesus are eyewitness reports.

“…Whom they killed by hanging on a tree” (v. 39). The account of Jesus’ actions reaches its climax when Jesus was crucified.

“Him God raised up on the third day, and showed him openly, not to all the people, but to witnesses chosen before by God, even to us who ate and drank with him after he arose from the dead” (v. 40–41).

Here Peter gives a summary of the activities of Jesus which is very similar to that in the Gospels; it is also consistent with what we know of Jesus from the Letters in the New Testament.

All the speeches in Acts contain a similar picture of Jesus. In Acts 2:22 we read that Jesus was “a man attested by God to you by miracles, wonders, and signs which God did through him in your midst, as you yourselves also know”. This confirms the picture of Jesus as not only a teacher, but also a worker of miracles.

This verse also describes who Jesus is: Peter calls him “a man attested by God”. This is a clear statement that Jesus is not God, contrary to the teaching of many churches today. And it is consistent with the picture of Jesus given throughout the speeches of Acts. For example in Peter’s speech to Cornelius in Acts 10 there are several statements which are incompatible with the idea that Jesus is God:

“God anointed Jesus of Nazareth with the Holy Spirit and with power…” (v. 38). As Jesus is anointed with power by God, he cannot be God.

“Him God raised up on the third day” (v. 40). As God raised Jesus from the dead, Jesus cannot be God.

“…It is he who was ordained by God to be Judge of the living and the dead” (v. 42). As God ordained Jesus to be judge, Jesus cannot be God.

These two points are picked up by Paul in his Letter to the Romans and linked to the resurrection of Jesus:

“…concerning His Son Jesus Christ our Lord, who was born of the seed of David according to the flesh, and declared to be the Son of God with power according to the spirit of holiness, by the resurrection from the dead” (Romans 1:3–4). This tells us that Jesus is fully descended from David in a physical way. The point is made even more forcefully in Acts 2:

Therefore, being a prophet, and knowing that God had sworn with an oath to him that of the fruit of his body, according to the flesh, He would raise up the Christ to sit on his throne… (v. 30).

This passage describes Jesus as being descended from King David in the most physical way possible. Descent from David is not simply a legal nicety; Jesus is really and physically a descendent of David the king. This emphasises the fact that Jesus could not have existed before David.

He was raised to life by someone else, namely God.

Neither of these facts is compatible with the idea that Jesus is God. God is the living God. If God dies then His creation is in great trouble. And the fact that Jesus was raised from the dead emphasises the fact that he is not God.

Again this point is repeated in the letters: “If you confess with your mouth the Lord Jesus and believe in your heart that God has raised him from the dead, you will be saved” (Romans 10:9). Here we find not only that Jesus was raised from the dead by God, but that we must believe this as a condition of our salvation.

The speeches in Acts do not only tell us what Jesus has done; they tell us about what he will do in the future.

Truly, these times of ignorance God overlooked, but now commands all men everywhere to repent, because He has appointed a day on which He will judge the world in righteousness by the man whom He has ordained. He has given assurance of this to all by raising him from the dead (Acts 17:30–31).

The picture of Jesus in the Acts of the Apostles is completely consistent with that in the Gospels, in the Letters and in the rest of the Bible. It is a picture of Jesus who is the Son of God (Acts 8:37, 9:20; 13:33) but not God. Jesus is described as a man approved by God who taught, healed and performed miracles in Judea and Galilee and was then executed by the authorities in Jerusalem. But God raised him from the dead; the apostles, among others, were witnesses to this fact. Finally, God exalted Jesus and raised him to heaven with the promise that he will one day return to judge the living and the dead.

This picture of the Lord Jesus Christ is the one that the apostles taught wherever they went. It is what they considered that a new Christian should understand and believe about Christ. This understanding is what they have passed on to us in the modern world, so that we too might become believers.