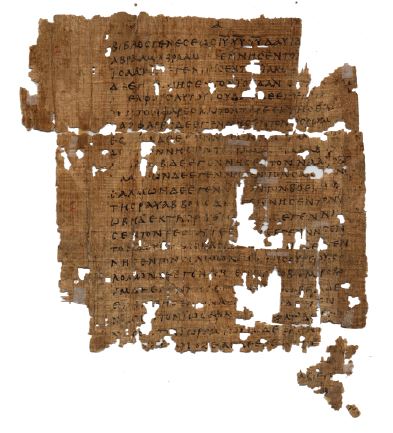 I REMEMBER my school teacher demonstrating to our class why we shouldn’t trust the Bible. He lined up some pupils and they played Chinese Whispers —the person at the front whispered a message in the ear of the one behind them, who whispered what they heard in the ear of the person behind them, and so on. Finally the person at the back said what they’d heard, and it was hilariously different from the original message.

That, declared my teacher, is how it is with the Bible. It’s an ancient book which has been copied through the generations, so what we now have will be completely different from what was originally written.

This is a view that is held by many people. It’s an appealing view, because the Bible is a challenging book and it says things that many people find uncomfortable. It claims to be the word of God, but if we have reason to believe it’s flawed then we don’t need to take it seriously.

The fact is, however, my teacher was wrong. There is an enormous amount of evidence to show that the Bible we have today is amazingly, minutely, miraculously similar to what was originally written.

We have nearly 6,000 fragments and over 30 full manuscripts of the Greek New Testament—there are far more historic copies of the New Testament than any other ancient book. The earliest documents date to the Second Century ad. Such is the sheer volume and quality of material that scholars are confident that the New Testament in our modern Bible is 99.5% ‘textually pure’. And the remaining half a per cent where there is doubt about the original words does not significantly affect the meaning.

There are far fewer manuscripts for the Old Testament. Until recently the oldest Old Testament manuscripts in existence dated to around 1000ad. They had been preserved by copying by generations of Jewish scribes. The scribes were legendarily meticulous, but even so it was expected that the text would have altered significantly in the copying over the centuries. So there was huge excitement in the academic world when, in 1948, a collection of clay jars was discovered hidden in a complex of caves at a place called Qumran on the shore of Israel’s Dead Sea—and these jars were found to contain a library of Hebrew Old Testament scrolls, which had been hidden there in the First Century ad! They were a thousand years older than the previously oldest known manuscripts.

The Dead Sea Scrolls were opened and analysed. They contain parts of every Old Testament book except one, and they contain some full books. And to the amazement of the academics, they were found to be virtually identical to the documents on which our modern Bibles are based. Those generations of Jewish scribes, copying and re-copying the scriptures over a thousand years, had preserved the Old Testament virtually intact apart from a few inconsequential errors.

So we know that the Old Testament we have in our Bibles is basically the same as the one that Jesus Christ and his apostles used. And we can therefore be confident that it has not changed since it was written over the previous two thousand years.

The fact that the Bible has been preserved so accurately is just one of the reasons why we can be sure it is no ordinary book. We could consider other reasons, such as the beautiful way it all fits together which shows a single divine mind overseeing its writing over the centuries; or the evidence of fulfilled prophecies; or the evidence it contains of scientific knowledge well ahead of its time.

But what does this mean for you and me? It means we need to take seriously the claims it makes and the message it contains.

What is the Bible’s claim? Over 2,000 times in the Old Testament alone we see statements such as “Thus says the Lord” and “The word of God came to me”. The Bible claims to be God’s message to us.

And what is that message? It’s the same message for us as Jesus Christ had for the people of his day:

It is an urgent and vital message. There are those who don’t want to hear it and try to find reasons not to listen. But for those who listen, it’s the Word of Life.