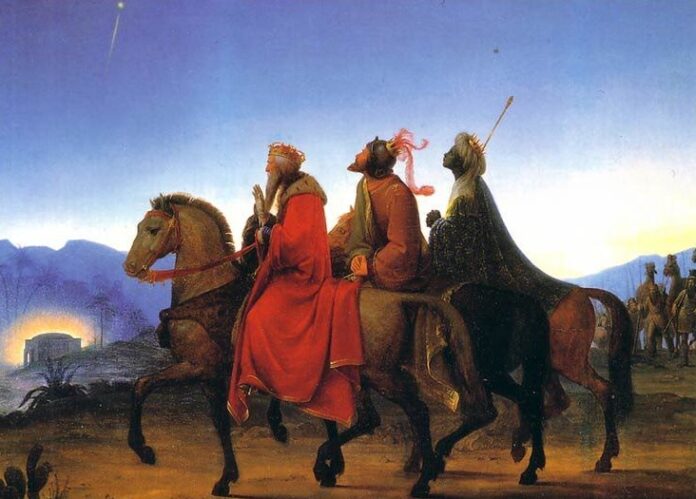 ANYONE WHO HAS received Christmas cards or watched a nativity play will be familiar with the story of the three kings who came to the stable to see the baby Jesus. Do you think you know the story? Here it is in full:

Now after Jesus was born in Bethlehem of Judea in the days of Herod the king, behold, wise men from the east came to Jerusalem, saying, “Where is he who has been born king of the Jews? For we saw his star when it rose and have come to worship him.”

When Herod the king heard this, he was troubled, and all Jerusalem with him; and assembling all the chief priests and scribes of the people, he enquired of them where the Christ was to be born. They told him, “In Bethlehem of Judea, for so it is written by the prophet: “‘And you, O Bethlehem, in the land of Judah, are by no means least among the rulers of Judah; for from you shall come a ruler who will shepherd my people Israel.’” Then Herod summoned the wise men secretly and ascertained from them what time the star had appeared. And he sent them to Bethlehem, saying, “Go and search diligently for the child, and when you have found him, bring me word, that I too may come and worship him.”

After listening to the king, they went on their way. And behold the star that they had seen when it rose went before them until it came to rest over the place where the child was. When they saw the star, they rejoiced exceedingly with great joy. And going into the house they saw the child with Mary his mother, and they fell down and worshipped him. Then, opening their treasures, they offered him gifts, gold and frankincense and myrrh.

And being warned in a dream not to return to Herod, they departed to their own country by another way… Then Herod, when he saw that he had been tricked by the wise men, became furious, and he sent and killed all the male children in Bethlehem and in all that region who were two years old or under, according to the time that he had ascertained from the wise men”’.

So, how many kings came to the stable? None, of course! They were ‘wise men’, not kings. Presumably the assumption is made that there were three because there were three gifts—gold, frankincense and myrrh—but we’re not told how many men there were. And they did not go to the stable to see a baby, they went to a house and saw a child.

Luke’s record tells us that shepherds went to see the baby Jesus on the day he was born. They were visited by angels who told them the news of Jesus’ birth: ‘When the angels went away from them into heaven, the shepherds said to one another, “Let us go over to Bethlehem and see this thing that has happened, which the Lord has made known to us.” And they went with haste and found Mary and Joseph, and the baby lying in a manger’ (Luke 2:15–16).

But time elapsed between the visit of the shepherds and that of the wise men. Some of it would be occupied in the long journey from the east. When King Herod realised that the wise men were not coming back to him, he attempted to kill Jesus by ordering the slaughter of all the children two years old and younger—because that was how old Jesus would have been by that time.

This is an example of how the Bible text can be changed by traditions. If we want to get to the truth of a Bible story or a Bible teaching, we need to set aside traditions and preconceptions, and carefully read the written record itself.

How Did They Know?

Let’s make it clear from the start—we do not know how the wise men knew about the birth of the Lord Jesus Christ. But there is information in the Bible which suggests how they might have known. What follows is a linking of Bible passages which may be relevant, and this illustrates the benefits of comparing different parts of the Bible with each other in order to understand better the treasures of God’s Word.

Abraham was the ancestor of the Jews and many of the Arabs. He is commended as a man of faith, who would exert a strong influence on his family:

The Lord said, “Shall I hide from Abraham what I am about to do, seeing that Abraham shall surely become a great and mighty nation, and all the nations of the earth shall be blessed in him? For I have chosen him, that he may command his children and his household after him to keep the way of the Lord by doing righteousness and justice…” (Genesis 18:17–19).

Before he died Abraham separated his other children from his chosen son Isaac (who was to become the ancestor of the Jews).

Abraham gave all he had to Isaac. But to the sons of his concubines Abraham gave gifts, and while he was still living he sent them away from his son Isaac, eastwards to the east country (Genesis 25:5–6).

These sons and their families, with a knowledge of God’s promises to Abraham, went their way and may have become a community of God-believers far away to the east, probably in Mesopotamia. (This was where Abraham had come from, see Acts 7:1–4.)

The Jews would have taken with them their Scriptures, which included the record of Abraham and God’s promises to him. The prophet Daniel was one of those deported to Babylon, and to him were revealed prophecies concerning the nations of the Middle East, and especially of Israel. These prophecies are in the book of Daniel. One of these prophecies concerned the timing of the coming of the Messiah (the ‘anointed one’):

Know therefore and understand that from the going out of the word to restore and build Jerusalem to the coming of an anointed one, a prince, there shall be seven weeks. Then for sixty-two weeks it shall be built again with squares and moat, but in a troubled time (Daniel 9:25).

This prophecy is complicated to us, but faithful Jews would have been able to calculate the timing, starting from the Persian King Cyrus’ order to rebuild Jerusalem. There is evidence (in the Bible and other sources) that at the time Jesus was born there was a mood of expectation among the Jews that the Messiah was about to arrive, for example Luke 2:38 and John 1:19–20.

Some of the Jews remained in Babylon when others returned. There may also have been God-fearing remnants of Abraham’s other descendants there. So we see, then, possible ways in which the wise men could have become acquainted with prophecies of the Messiah, and anticipated his birth.

The wise men followed a star. We don’t know why this was, but there is an intriguing prophecy that was given by Balaam (a prophet from Mesopotamia, Numbers 22:5):

I see him, but not now; I behold him, but not near: a star shall come out of Jacob, and a sceptre shall rise out of Israel (Numbers 24:17).

The sceptre speaks of kingship. Perhaps this is why the appearance of a special star was seen as the signal for the journey which would lead eventually to Bethlehem.

We have seen from this example that when we read a passage of the Bible carefully, discarding any preconceptions, its meaning will become clear; and also, when we compare a passage with other parts of the Bible we can gain fascinating insights that were not apparent at first.