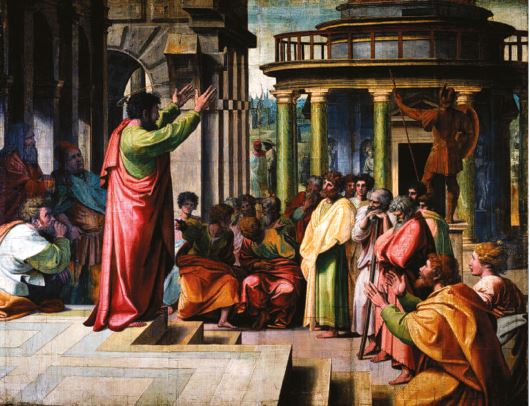 This is the fifth in a series in which we examine this fascinating Bible book. You can catch up with the previous articles at www.gladtidingsmagazine.org.

THE PERSON who is perhaps most associated with Acts is the Apostle Paul. Paul is the main character in more than half of Acts; he also wrote at least 13 of the letters which are preserved in the New Testament.

Paul was born in Tarsus in Cilicia (now southern Turkey) of Jewish parents, but unusually for a Jew he was also a Roman citizen. At some point he moved to Jerusalem where he was instructed in Judaism by some of the most prestigious teachers of his day.

Paul’s collision with Christianity began in Judea. At this time he went by the name of Saul and was a scholar of the Jewish Law in Jerusalem. He was part of the group who were actively persecuting Christians. He first appears in Acts 7:58 where he assisted with stoning to death Stephen, one of Christ’s followers.

He then set off for Damascus to bring persecution to the Christians who had started a congregation there. On the way, however, he met Jesus Christ, who was plainly alive. Paul could not deny Christ’s resurrection in the face of this evidence, and from that point on he proclaimed the resurrection of Jesus wherever he went.

Paul’s encounter with Jesus left him blind, but he was taken by his companions into Damascus where he was healed and baptised. He then went into Arabia (which the Romans considered to begin just outside Damascus), where he learned the Gospel directly from Jesus in a number of visions or other encounters. He also proclaimed the resurrection from the dead, doing this with such effect that the Nabateans who ruled that part of the world tried to arrest him, as did the Jews of Damascus.

Paul escaped from Damascus and went to Jerusalem, where he again made such a stir in the city that he was forced to leave. He went home to Tarsus.

He spent several years in Tarsus. We have no direct information on what he did in this period, but much of the suffering he recounts in 2 Corinthians 11:23–33 must have happened during this period. Because the Bible tells us so little about what he was doing at this point, the time is sometimes described as ‘Paul’s silent years’.

In Acts 11:22–24 we read that the disciple Barnabas went to Tarsus to find Paul, and brought him back to Antioch. From there Paul and Barnabas were sent to Judea to bring famine relief, and on this journey they visited Jerusalem. This is known as the ‘famine relief visit’. It is referred to in Acts 11:27–30 and in Acts 12:25.

From this point on Paul started to make major journeys throughout the Eastern Mediterranean area to proclaim the Gospel. These journeys are known as Paul’s ‘missionary journeys’.

The first of Paul’s missionary journeys is described in Acts 13 and 14. Paul and Barnabas, with John Mark as a companion, set out from Antioch and arrived in Cyprus. Having proclaimed the Gospel in Salamis and through villages in southern Cyprus, they arrived in Paphos, the capital of Cyprus. Here they had a major success: Sergius Paulus, the Roman governor, converted to Christianity. Paul travelled to Asia Minor, where he apparently had the intention of proclaiming the Gospel to more Gentiles (non-Jews).

At Perga in Pamphylia Mark left them and went back to Jerusalem. Paul and Barnabas went on to Antioch in Pisidia. From now on Paul took the lead in proclaiming the Gospel. He preached in Antioch. He was driven out by Jewish opposition, and moved on to Iconium, Lystra and Derbe, pursued by vigorous opposition. In each of these towns he founded a congregation containing both Jewish and Gentile members.

When Paul returned to Antioch he found that news of his exploits had gone before him, and some Jewish disciples who were unhappy that he was preaching to the Gentiles had come from Jerusalem to challenge him (Acts 15:1). Paul went to Jerusalem for a council of apostles to settle the issue. The decision was that Gentiles could enter the Christian community with only minimal restrictions on their behaviour, they did not need to convert to Judaism.

Paul then set off on a second journey. He visited the congregations that he founded on his first journey and then moved on, ending in Troas. Here he had a vision of a man asking him to come to Macedonia. He obeyed the vision and went, and founded congregations in Philippi, Thessalonica and Berea. At each of these he encountered opposition, from the local people and from the Jewish community. To escape this opposition he travelled to Athens in Greece and then to Corinth, founding two more congregations. After a long stay in Corinth he visited Ephesus on the way back to Jerusalem, and then Antioch.

On his third journey Paul again visited Galatia and then arrived in Ephesus, where he spent more than two years. He finally left for Macedonia, where he continued as far as Illyricum (modern Albania and Montenegro). He spent the winter in Corinth and returned overland to Philippi, where he spent the next winter. He then proceeded by ship to Jerusalem, where he was arrested.

Paul remained two years in prison in Caesarea, during which he explained the Gospel to Roman governors and to King Agrippa II. He was under threat from the Jewish religious establishment in Jerusalem, but was safe in Caesarea. Finally, he appealed to Caesar and was sent to Rome to face trial.

On the voyage to Rome Paul’s ship was caught in a storm and wrecked on the island of Malta. Here he spent another winter under guard before he was put on board a grain ship and taken to Italy, and hence to Rome.

Paul arrived in Rome in the early spring. He was allowed to hire a lodging in Rome, but was under house arrest there for two years. During this time he was able to have visitors and to proclaim the Gospel in the city.

The Book of Acts ends with Paul in prison, waiting for his appeal to be heard. This must have happened fairly soon after Acts was completed; we have three letters from Paul (1 and 2 Timothy and Titus) which show that he must have been released shortly after this. Paul then spent two more years travelling before he was arrested again and sent to a prison in Rome. He would almost certainly have been there when Nero’s persecution began, and would almost certainly have died in that persecution.

During his busy life Paul wrote his letters, some of which we have in the Bible. These are important because they deal with the problems of the various congregations and individuals to whom they were written and provide further information about the Gospel of Jesus Christ. The problems addressed by the letters have reappeared over and over again during the course of history and Paul’s letters are an indispensable guide to the management of problems and to the conduct of Christian congregations.

The speeches of Paul also give us a picture of the Gospel that he carried throughout the world where he went. The Gospel is exactly the same as that proclaimed by the other apostles, and it matches the detail given in Paul’s letters. What is interesting is the way that while the message never changed, the way that Paul delivered it did vary, depending on whom he was speaking to.

The Acts coverage of the Apostle Paul takes us from the start of his career as a persecutor of Christianity to his arrest for proclaiming the Christian Gospel and his captivity in Rome because of this. The fact that such an opponent of the faith became a powerful advocate for it is, in itself, a witness to the truth of the Christian message. Acts is very concerned to present this message.