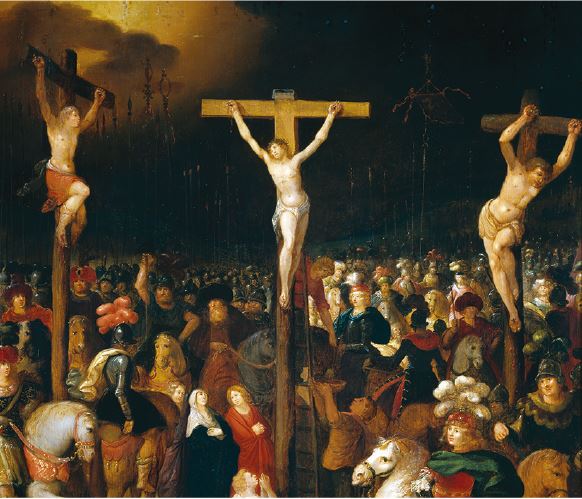 IT WAS DUSK, so I stopped at the side of the road to fit my bike lights. Suddenly another cyclist came hurtling around a blind corner, swerved to avoid colliding with me, spat something abusive about my stopping in a stupid place, and pedalled off along a footpath under a sign that said ‘No cycling’.

My impulse of course was to give chase, catch up with him and explain, forcefully and by means possibly involving pushing him off his bike, that actually it was he and not I who was in the wrong. That however would have been the wrong thing to do on many levels, and it’s certain that no good would have come of it.

One of the most basic human urges is to retaliate when someone wrongs you. It feels natural and right to get your own back. One of the most difficult things Jesus Christ demands of his followers is to resist this urge.

You have heard that it was said, ‘An eye for an eye and a tooth for a tooth.’ But I tell you not to resist an evil person. But whoever slaps you on your right cheek, turn the other to him also. If anyone wants to sue you and take away your tunic, let him have your cloak also (Matthew 5:38–40).

“An eye for an eye and a tooth for a tooth” was a principle which came from the Law of Moses (Leviticus 24:19–22). It was part of God’s instructions to the rulers who were responsible for administering justice in Israel. If someone caused harm to someone else, they were to suffer what they inflicted on their victim, but no more than the damage they had caused. Jesus said, if you’re the victim don’t demand retribution—instead, be prepared to forgive.

Repay no one evil for evil. Have regard for good things in the sight of all men. If it is possible, as much as depends on you, live peaceably with all men. Beloved, do not avenge yourselves, but rather give place to wrath; for it is written, “Vengeance is Mine, I will repay,” says the Lord. Therefore “If your enemy is hungry, feed him; if he is thirsty, give him a drink; for in so doing you will heap coals of fire on his head” (Romans 12:17–20).

It’ll come as no surprise to learn that Paul was quoting from the Old Testament. “Vengeance is Mine” is a refrain which occurs a number of times (for example Deuteronomy 32:35). God makes clear that vengeance is His prerogative, and this is a hugely important principle. God knows what is going on in people’s heads, what might be making them do the things they do. And He knows how to deal with them. If someone hurt us and we were to give them what we think they deserve, we would be likely to get it wrong.

And the instruction to be good to your enemy is a quote from Proverbs 25:21–22. What does it mean, if you repay good for evil “you will heap coals of fire on his head”? Experience shows that being nice to someone who’s nasty to you will often have one of two outcomes: either it will irritate them because they are deprived of the satisfaction they were aiming for, or (surprisingly often) it will win them over. Either way, their pride or their conscience is scorched, and this gives the best chance of the best outcome—that is, to turn them from their folly and show them a better way.

The Example of Jesus

This principle of non-retaliation was one which Jesus himself lived by. He was not weak. When there was error to be tackled, he tackled it head on (Matthew 15:3); when there was injustice to call out,

he did it loud and clear (Matthew 23:14); when people were disrespecting God he stopped it (Matthew 21:12); but when he was victimised, he did not stand up for himself. The Gospel records describe how he endured without complaint the awful abuse from his enemies which culminated in his execution (Mark 15:5).

As the soldiers hoisted him on to the cross on which he was to suffer the most excruciating death ever devised by humankind, his words were “Father, forgive them, for they do not know what they do” (Luke 23:34).

By doing this he set an example for his followers. And he did more than this—he was carrying out God’s will by giving his life as a sacrifice to save us from our sins.

When we contemplate this act of love which is at the centre of the Gospel, we may well assess our own behaviour in an entirely new light.

For to this you were called, because Christ also suffered for us, leaving us an example, that you should follow his steps: “who committed no sin, nor was deceit found in his mouth”; who, when he was reviled, did not revile in return; when he suffered, he did not threaten, but committed himself to Him who judges righteously; who himself bore our sins in his own body on the tree, that we, having died to sins, might live for righteousness—by whose stripes you were healed (1 Peter 2:21–24).