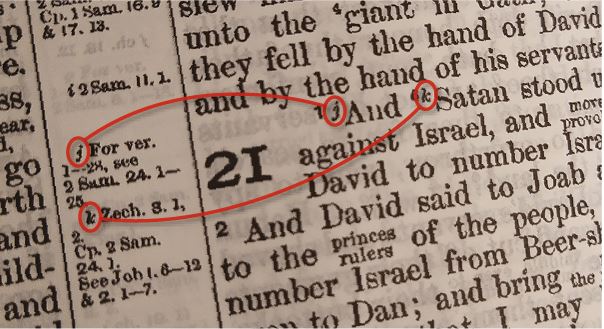 AN INTERESTING and very useful feature of the Bible is the fact that you can put two or more passages together to gain a better understanding of the whole. This is possible because of the consistency of the Bible’s content. The Bible says of itself that “all Scripture is given by inspiration of God” (2 Timothy 3:16), and of God we read “I am the Lord, I do not change”

(Malachi 3:6). The Bible ultimately has one author, the unchanging God, so we should not be surprised that it is entirely consistent.

There is a Bible precedent for putting different passages together, borne out of the method by which the book has been transmitted through many different inspired writers. This is the concept of multiple witnesses. Under the law which God gave to His people Israel, which is known as the Law of Moses, one witness wasn’t enough to convict a person or convince a court:

One witness shall not rise against a man concerning any iniquity or any sin that he commits; by the mouth of two or three witnesses the matter shall be established (Deuteronomy 19:15).

Jesus picked up on this law when he said in a similar context, “by the mouth of two or three witnesses every word may be established” (Matthew 18:16).

This principle can be applied with good effect when studying the Bible itself: putting two or three passages together helps to clarify the principle being examined. Sometimes it reveals things you might not expect.

Where do you start? If you’re looking at a Bible passage, how can you find related passages to compare it with? One method is cross references. Many Bibles have cross references which draw your attention to similar verses.

These cross references were not in the original text of the Bible, they have been put there by the publishers to help with Bible study. Consider the following examples.

The Bible makes lots of references to Jesus’ second coming. Perhaps the most celebrated is the record of the words spoken by the angels to Jesus’ disciples whilst they gazed open-mouthed at the cloud into which Jesus had just disappeared: “Men of Galilee, why do you stand gazing up into heaven? This same Jesus, who was taken up from you into heaven, will so come in like manner as you saw Him go into heaven”

Acts 1 describes how Jesus and the disciples were on the Mount of Olives to the east of Jerusalem, when he was taken up into heaven and a cloud received him out of their sight. The message from the angels was that Jesus will return in the same way. This is consistent with many other passages. One of particular interest is in the Old Testament prophecy of Zechariah:

Behold, the day of the Lord is coming, and your spoil will be divided in your midst. For I will gather all the nations to battle against Jerusalem; the city shall be taken, the houses rifled, and the women ravished. Half of the city shall go into captivity, but the remnant of the people shall not be cut off from the city. Then the Lord will go forth and fight against those nations, as He fights in the day of battle. And in that day His feet will stand on the Mount of Olives, which faces Jerusalem on the east. And the Mount of Olives shall be split in two, from east to west, making a very large valley; half of the mountain shall move toward the north and half of it toward the south (Zechariah 14:1–4).

The context of this prophecy is the prelude to the Kingdom of God. Jerusalem is surrounded by enemies, half the city is taken and the victors are cruelly triumphant over the defeated Jews. This is the moment when the Lord Jesus Christ appears, and the parallels with Acts 1:11 are clear. Putting the two passages together gives a clearer picture of the whole. If you continue to read the rest of Zechariah 14 it describes the re-establishment of the Kingdom of God. (This is the very thing the disciples had just asked Jesus about in Acts 1:6.)

There is a similar passage in 1 Thessalonians which describes Jesus’ return but this time from the perspective of the believers who are raised from the dead when he comes:

But I do not want you to be ignorant, brethren, concerning those who have fallen asleep, lest you sorrow as others who have no hope. For if we believe that Jesus died and rose again, even so God will bring with him those who sleep in Jesus. For this we say to you by the word of the Lord, that we who are alive and remain until the coming of the Lord will by no means precede those who are asleep. For the Lord himself will descend from heaven with a shout, with the voice of an archangel, and with the trumpet of God. And the dead in Christ will rise first. Then we who are alive and remain shall be caught up together with them in the clouds to meet the Lord in the air. And thus we shall always be with the Lord. Therefore comfort one another with these words (1 Thessalonians 4:13–18).

This passage describes Christ’s return, and mentions the clouds, and it also tells us that at that time there will be a resurrection of the dead. Paul calls them “those who sleep”, because as far as the Bible is concerned when a believer dies they are asleep, waiting to be awoken.

One final passage in this sequence draws together what we have seen and reveals another aspect of Jesus’ return.

At that time Michael shall stand up, the great prince who stands watch over the sons of your people; and there shall be a time of trouble, such as never was since there was a nation, even to that time. And at that time your people shall be delivered, every one who is found written in the book. And many of those who sleep in the dust of the earth shall awake, some to everlasting life, some to shame and everlasting contempt. Those who are wise shall shine like the brightness of the firmament, and those who turn many to righteousness like the stars forever and ever (Daniel 12:1–3).

The “time of trouble” ties in with what we learnt from Zechariah 14, the raising of those who “sleep in the earth” is consistent with 1 Thessalonians 4. So we also learn that there will be a selection, a judgement at Jesus’ return. This is confirmed by other passages such as Jesus’ parable of the sheep and the goats:

When the Son of Man comes in his glory, and all the holy angels with him, then he will sit on the throne of his glory. All the nations will be gathered before him, and he will separate them one from another, as a shepherd divides his sheep from the goats. And he will set the sheep on his right hand, but the goats on the left… (Matthew 25:31–33).

Each of these passages gives a part of the picture of what will happen at Christ’s return. Such is the consistency of the Bible that we can put them together and see a fuller picture. There are many other passages which give further details.

Satan and the Lord

Who is Satan? We see the surprising answer to this question when we put together two parallel Bible passages.

In 1 Chronicles 21:1–2 we read: “Now Satan stood up against Israel, and moved David to number Israel. So David said to Joab and to the leaders of the people, ‘Go, number Israel from Beersheba to Dan, and bring the number of them to me that I may know it.’”

Describing the same event, 2 Samuel 24:1–2 reads: “Again the anger of the Lord was aroused against Israel, and He moved David against them to say, ‘Go, number Israel and Judah.’ So the king said to Joab the commander of the army who was with him, ‘Now go throughout all the tribes of Israel, from Dan to Beersheba, and count the people, that I may know the number of the people.’”

On this occasion Satan is “the Lord”, the God of Israel. This is surprising until it’s understood that the word ‘satan’ in the Hebrew language simply means ‘adversary’. God was an adversary to Israel because it appears they were unfaithful to him. He tested them to see if they would be faithful or not.

The first time the Hebrew word ‘satan’ occurs in the Bible is in Numbers 22:22, when an angel of God is sent to confront a prophet who was intent on a foolish errand: “Then God’s anger was aroused because he went, and the Angel of the Lord took his stand in the way as an adversary against him.”

By putting these verses together, we have discovered that ‘satan’ refers to an adversary, someone who opposes someone else. That opposition can be a force for good or a force for evil: the word itself is ambivalent, the clue is in the context.

From that time Jesus began to show to his disciples that he must go to Jerusalem, and suffer many things from the elders and chief priests and scribes, and be killed, and be raised the third day. Then Peter took him aside and began to rebuke him, saying, “Far be it from you, Lord; this shall not happen to you!” But he turned and said to Peter, “Get behind Me, Satan! You are an offense to me, for you are not mindful of the things of God, but the things of men” (Matthew 16:21–23).

Peter was a disciple who loved Jesus and wanted the best for him, but because he was unwittingly opposing the Lord’s will he was called Satan.