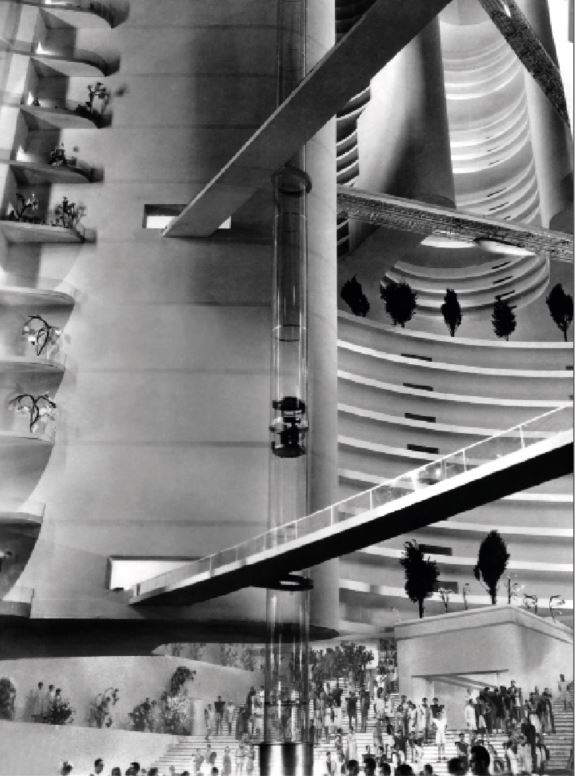 IN 1936 EUROPE was on the brink of war, and the world wondered what the future would hold. It was an apt moment for the release of a film entitled Things To Come. The film was written by the author and visionary H G Wells, and it presented his view of the future of humankind. He predicted that the approaching war would be so dreadful because of the advanced technology available, that it really would be the war to end all wars and humankind would finally come to its senses and decide to live in peace. The peoples of the world would set about using the marvels of modern technology to build a utopian society of harmony and prosperity. The film ends with a stirring speech by the president of the new order, in which he extols humanity’s unending quest for knowledge and advancement which will lead us to the stars.

The Second World War broke out three years later. It was a war in which the world experienced the very worst of what humanity is capable of, amplified by the devastating capabilities of 20th Century technology. In 1945, the year the war ended, Wells wrote his last book Mind at the End of its Tether, in which he questioned whether humanity is fit to survive at all.

The advance of technology has vastly improved the lives of much of the world’s population. But it has done nothing to make humankind better morally—it has only made us more dangerous. The fact is we have never been able to create a harmonious society. For all our increased knowledge there is no more prospect of our building utopia now than there ever has been. Now perhaps more than ever before the world wonders what the future will hold.

Glad Tidings of the Kingdom

We do not need to wonder, because actually we’ve been told what the future holds. The Glad Tidings of the Kingdom of God, which are central to the Bible’s message, are not the hopeful musings of a visionary—they are the promises of God, Who has shown Himself to be reliable.

The destiny of the world is in God’s hands, and it is expressed in a sentence by another prophet: “For the earth will be filled with the knowledge of the glory of the Lord, as the waters cover the sea” (Habakkuk 2:14). Utopia will be established on the earth, but it will be the work of God, not us.

Here in brief are some of the things we’re told about the establishment of the Kingdom and what it will be like:

Ezekiel 38 describes the nation of Israel, recently re-established and dwelling in prosperity and complacency, invaded by a military confederacy led by a northern super-power. The invasion is met and defeated by God Himself.

Zechariah 14 reveals that this is the time of the second coming of Jesus Christ to earth (compare verse 4 with Acts 1:11–12). The invading army will be destroyed and the world transformed.

Psalm 2 shows Jesus Christ as the new king of the world, established on his throne in Jerusalem and subduing the world to his authority.

Micah 4 describes life in the Kingdom—the nations submissive to Christ’s rule, learning the ways of God and living in peace.

Ezekiel 40–48 details the restructuring of the land of Israel which is to centre on a magnificent new temple.

Psalm 72 celebrates the glory and prosperity of Christ’s reign.

All these are Old Testament prophecies, from the first part of the Bible which deals with events before the birth of Christ. But the New Testament prophecies continue the same theme—notably a prophecy of Jesus himself, which is sometimes referred to as the Olivet Prophecy (because it was delivered on the Mount of Olives), which you can read in Luke 21. This prophecy weaves together warnings of an immediate attack on Jerusalem and destruction of the city, which happened in 70 ad, and a long-term vision of a time of worldwide distress which will herald his second coming.

The prophecy ends with a personal warning. The return of Christ will be an event which shakes the earth to its core, along with all its inhabitants. It demands preparation.

But take heed to yourselves, lest your hearts be weighed down with carousing, drunkenness, and cares of this life, and that day come on you unexpectedly. For it will come as a snare on all those who dwell on the face of the whole earth. Watch therefore, and pray always that you may be counted worthy to escape all these things that will come to pass, and to stand before the Son of Man (Luke 21:34–36).