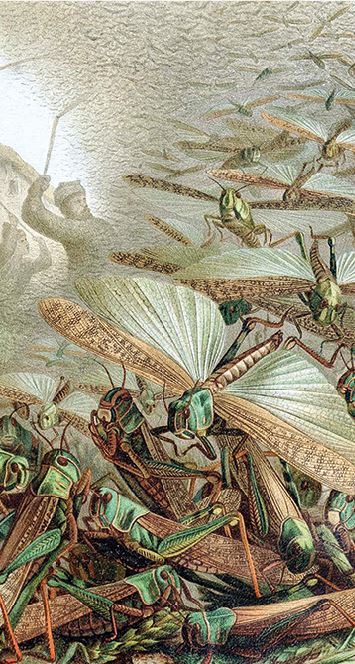 A prophecy of forthcoming judgements in Israel, including the final conflict in which God will dramatically intervene.

The Locust Plague (chapter 1) From the start God had warned Israel that if they turned from His word, great disasters would follow (Deuteronomy 28). Literal plagues of locusts were sent to remind God’s people of what He had said. When He appealed to the Jews through the prophet Joel, around 800bc, God likened the forthcoming invasions of human armies to the cutting, swarming, hopping, destroying locusts, which they may already have experienced (1:4).

Invading Armies (chapter 2) Assyrian and Babylonian invasions of the land of Israel, foretold in this chapter, were followed centuries later by Greek, Roman and Arab incursions. These left the Holy Land desolate until 1917ad, when the Jews were allowed to return.

Promise of Blessing (2:18–32) The troubles which were to come on God’s people had as their object the return of Israel to the true worship of God. Great blessings are promised when this national repentance finally comes. Meanwhile, the greatest invasion of the Holy Land is yet to take place!

The Final Invasion (chapter 3) Details are given of an invasion by all nations, at a time when Israel are back in their land (3:1), as they are today.

The wickedness of all nations is now so great (verses 12–13) that when North and South become involved in a great Middle East conflict, God’s judgements will be seen on the earth. The time is ripe for the putting in of His “sickle” (verse 13) and the cutting down of the wicked! Verse 16 describes God’s dramatic intervention by sending Jesus Christ to establish his kingdom with its capital Jerusalem.