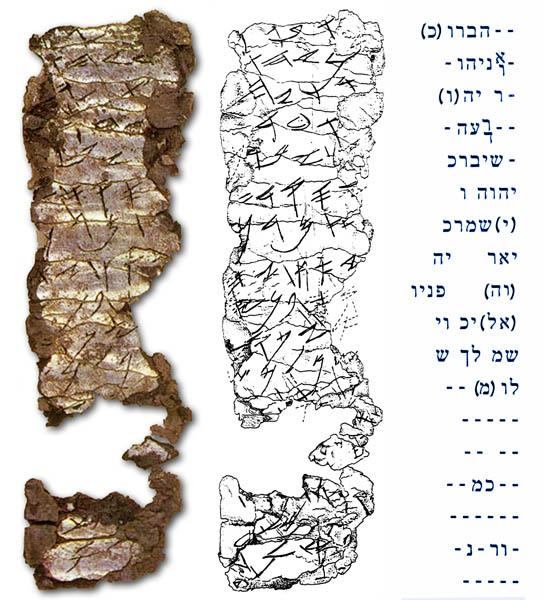 Excavation of ancient tombs can be frustrating, because it’s usually the case that they have already been looted. However, occasionally a tomb is found which has escaped the notice of the grave-robbers.

In 1979, archaeologists were investigating a series of caves on the edge of the old city of Jerusalem. They had been used as a communal tomb and had held around a couple of dozen bodies. They had been stripped by grave-robbers long ago, but the archaeologists discovered a corner which had been protected by a section of fallen roof. In this forgotten corner they found a large number of pots and other artefacts, and most exciting of all, two tiny silver scrolls, the largest measuring less than 10cm long.

They were badly corroded and fragile. It took three years to decide how best to open them, but when they were finally unrolled the scientists found, to their huge excitement, that they were inscribed with exquisite ancient Hebrew script.

On the inside of one of the scrolls is a passage from the Bible, identical almost word-for-word to the Bible text:

The passage is Numbers 6:24–26. These were the words with which the priests used to bless the people, and Jews know it as the ‘priestly blessing’.

Analysis of the metal and high-resolution photographs of the script led researchers to the conclusion that the scrolls date from around 600 BC. They were placed in the tomb just a few years before the city was destroyed and its population killed and captured by the Babylonian army. This makes them the oldest known written Bible text.

The question arises – what were they for? Why inscribe the text on silver, so small that it can barely be read by the naked eye, and then roll it so tightly that it can’t be read? The answer, archaeologists believe, is that they were not meant to be read – they were amulets or charms to confer on their owner God’s protection in life (and it seems, from the fact that they were buried with their dead owner, in the afterlife).

But that is no way to treat the Bible.

When we open our hearts to God’s word and let it work in our lives it is transforming and energising and “able to make us wise for salvation” (2 Timothy 3:15). It is not a lucky charm.

The Day of God’s Wrath

At the time these scrolls were made the Jewish nation had all but turned its back on God. He sent prophets to urge them to mend their ways. One of these prophets was Zephaniah. He foretold the punishment that God was going to bring on his people in graphic terms:

I will bring distress upon men, and they shall walk like blind men, because they have sinned against the Lord; their blood shall be poured out like dust, and their flesh like refuse. Neither their silver nor their gold shall be able to deliver them in the day of the Lord’s wrath; but the whole land shall be devoured by the fire of His jealousy, for He will make speedy riddance of all those who dwell in the land (Zephaniah 1:17–18).

Shortly afterwards the Babylonian army destroyed Jerusalem and the Jewish nation. These beautiful little scrolls survive as a testimony to the futility of superstition.

The scrolls are on display in the Israel Museum.