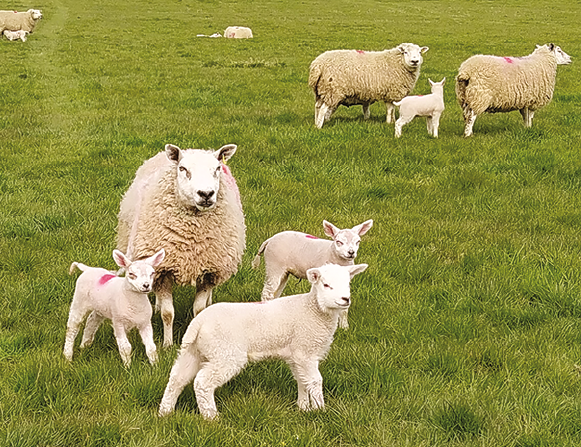 ON MARCH 30th 1956, the peninsula of Kamchatka in the far east of Russia was rocked by a tremendous explosion. With an energy equivalent to 40 billion electric fire bars, the great volcano Bezimianny literally blew its top. Within seconds millions of tons of rocks, reduced to fine powder, shot into the stratosphere at twice the speed of sound. Later that afternoon a strange thing happened. As the dust began to drift back out of the sky, the daylight faded. Soon a darkness fell over the surrounding cities, so impenetrable that you could not see your own hand, not even holding it close to your face. People returning from work groped about in the streets, searching for their homes. They were disorientated and terrified.

To the Egyptians in the time of Moses, the ninth plague that God brought upon the land must have been a similar experience. We are not told how it was caused, but when Moses stretched out his hand, a thick darkness enveloped the country. The Bible describes it as ‘a darkness to be felt’ (Exodus 10:21). For three days. the sun, the very emblem of the life of Egypt, failed to rise. Cowering in their homes, the Egyptians were dismayed by this omen of doom and conceded that the God their Hebrew slaves worshipped had finally beaten all the gods of the land. Moses was able to warn his people the end was very near.

The tenth plague was the strangest and most calamitous of all. Moses carefully prepared the Israelites for it. As the 14th night of the first month drew on, each Israelite household was to roast and eat a Iamb. They must hurry. The accompanying bread must be baked end eaten unleavened, because there was no time to wait for the yeast to make it rise. They were to put on their coats and shoes, and be ready to leave at a moment’s notice.

The oddest command he gave concerned the blood of the lamb. Usually when an animal was slaughtered for food, the blood was poured out on the ground and covered with dust. This time, the blood of the Iamb was to be caught in a bowl and spattered over the posts and Iintel of the front door. The significance of this ritual soon became apparent.

Towards midnight on the fateful night, the Israelites were waiting expectantly in their homes. Suddenly a ghastly cry floated across on the night air from the Egyptian settlements, to be joined by another, and another. It was a sound that generations of Israelites would never forget. In every Egyptian household the eldest male lay dead. As each family discovered the glazing eyes and stiffening corpse of its firstborn, the combined wailing of thousands of despairing throats ascended to the stars in indescribable anguish.

The Israelites paled with fear. But in every house where the head of the family had obeyed Moses’ instructions, the blood on the door posts had done its job. The firstborn continued to live and breathe.

After that, things began to happen quickly. Messengers ran swiftly round the camp, ordering the twelve tribes to assemble in orderly companies at their rendezvous. Pharaoh hastily signed the warrant releasing the Israelites from their bondage.

So keen were the Egyptians to see the backs of their slaves that they thrust them out in the middle of the night, heaping upon them gold, jewellery, and whatever they asked. By morning light, over half a million men with their families had left the country.

The climactic event that broke the will of Pharaoh was supernatural. Yet. as we noted previously, its authenticity is beyond doubt. To this day, Jews all over the world celebrate the Passover every year on the 14th day of the month Abib, eating again the unleavened bread and reciting the story of their deliverance. It is a challenge to the sceptic, and a reassurance to the slow of faith.

But what are we to make of the Passover Lamb, the unleavened bread and the sprinkled blood? What hidden messages were they intended to convey? Why did a Iamb have to die, to deliver them from death?

Fortunately, the specification gives us a clue. The lamb had to be a male. It had also to be without blemish (Exodus 12:5). Not a bone of it was to be broken (verse 46). The blood was to be sprinkled with a twig of hyssop (verse 22). And once the door of the house was closed, nobody was to leave, on pain of death. ‘For the Lord will pass through to strike the Egyptians, and when he sees the blood on the lintel and on the two doorposts, the Lord will pass over the door and will not allow the destroyer to enter your houses to strike you’, said Moses (verse 23).

Lambs had been used for sacrifice from Eden onwards. Each untimely death of an animal pointed forward to the coming of Jesus the Redeemer, who would give himself to be sacrified on the cross for sinners such as us. The momentous night of deliverance from Egypt was being made into an object lesson Israel would never forget. Their years of helpless bondage in Egypt were a graphic symbol of sin. Sin holds us all in its grip, Iike an iron taskmaster. No matter how we try, we cannot escape. We follow our own desires, as slaves obey their master, and wear ourselves out in an empty striving for an elusive satisfaction that ends in death. ‘For when you were slaves of sin,’ wrote the Apostle Paul, ‘… what fruit were you getting at that time from the things of which you are now ashamed? For the end of those things is death’ (Romans 6:20–21).

The darkness that fell upon Egypt in the days preceding the Passover also had a place in the symbolism. Darkness, sin and death are linked together throughout the Bible. ‘This is the judgement’, Jesus declared: ‘the light has come into the world, and people loved the darkness rather than the light because their works were evil. For everyone who does wicked things hates the light and does not come to the light’ (John 3:19–20).

Darkness conceals murder, theft and immorality. Light throws into relief the ruin and barrenness of sin. The return of Iight, just before the deliverance from Egypt, meant Israel had gone back to work for one last day to savour to the full the bitterness of the old life they were about to leave. The deliverance from that bondage depended now upon their accurately fulfilling the conditions laid down by Moses, the messenger of God.

The Iamb they slew, male and free from blemish, stood clearly for the sinless Christ who was to come far in the future to redeem his people from their sins.

When Jesus was crucified, the soldiers broke the legs of the two thieves hanging with him, but left Jesus’ bones unbroken. This makes a striking connection with the Passover lamb, because its bones were never to be broken (John 19:32–36). Even the hyssop used to sprinkle the blood of the lamb is to be found at the crucifixion. It was used to give the dying Jesus a drink (John 19:29).

What is the equivalent of the door posts of the house? When we declare our belief in the work of Christ, and are baptised under water into his name, we do not literally sprinkle Jesus’ blood anywhere. Yet the act of baptism, a loving response to the command of the apostles, is in effect the sprinkling of Christ’s blood on our heart. Peter writes ‘you were ransomed from the futile ways inherited from your forefathers, not with perishable things such as silver or gold, but with the precious blood of Christ, like that of a lamb without blemish or spot’ (1 Peter 1:18–19).

‘Christ, our Passover lamb, has been sacrificed,’ Paul writes. ‘Let us therefore celebrate the festival, not with the old leaven, the leaven of malice and evil, but with the unleavened bread of sincerity and truth’ (1 Corinthians 5:7–8).

It all fits. The symbol is complete. We can set out clean, free and full of hope, on our individual journey to the Promised Land. And not a penny have we paid for this precious gift of God. ‘All have sinned and fall short of the glory of God’, we read, ‘and are justified by his grace as a gift, through the redemption that is in Christ Jesus’ (Romans 3:23–24).