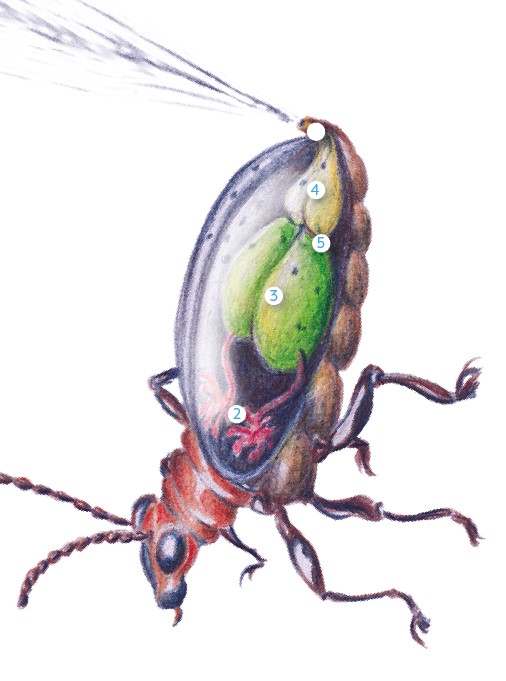 A BOMBARDIER is a type of soldier. The bombardier beetle was given its name because of the intricate and deadly mechanism in its tail with which it defends itself. At the end of the beetle’s tail is a tube 1, which is basically a gun barrel. Behind the barrel is a chemical factory. A pair of glands 2 manufacture hydroquinine and hydrogen peroxide, which are stored in reservoirs3. When the beetle wants to open fire these chemicals are loaded into a combustion chamber filled with water4, and mixed with two other chemicals—catalases and peroxidases— which are secreted by glands in the transfer duct5. This causes a reaction which instantaneously heats the water in the combustion chamber and causes it to be ejected as a boiling spray of noxious steam. The spray can reach to 200 times the beetle’s length, and can be aimed in any direction with pinpoint accuracy.

It is a superbly designed weapon. It only works because all four chemicals are kept apart under normal conditions, then mixed in exactly the right order and exactly the right proportions when the beetle wants to fire. If any part of the mechanism did not function precisely as it does, either the weapon would not work—in which case, what’s the use of having it?—or the beetle would blow itself up.

Desperate atheists have invented ingenious and implausible explanations as to how the bombardier beetle might have evolved by chance. For me, I think it makes much more sense to believe what God says in His book: “In the beginning God created the heaven and the earth” (Genesis 1:1). How about you?