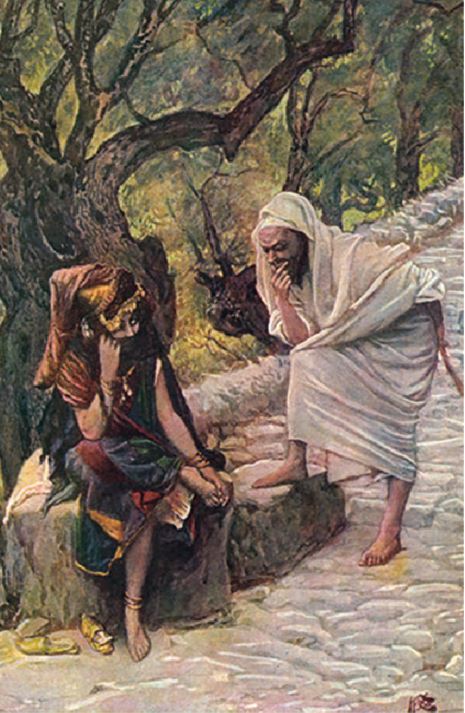 The Gospels of Matthew and Luke give lists of the ancestors of Jesus Christ. Matthew 1:1–17 provides his legal ancestry through his step-father Joseph, and Luke 3:23–38 provides his biological ancestry through his mother Mary. All the ancestors named in Luke are men, but Matthew also names five women. These five women were all very special individuals. In this series we will look at them in turn. The first is Tamar.

ABRAHAM LIVED around 2000 bc. God made special promises to him, and he became the founder of Israel (the Jews)and of many of the Arab nations. Much of the Bible is concerned with the nation, and neighbours, of Israel. Jesus was born of Mary, a Jewess.

Abraham’s son was Isaac, and Isaac’s son was Jacob, and it was through these sons that God’s promises were passed. Jacob had twelve sons, and the fourth was called Judah, whose descendants lived in the south of the land of Israel, called Judea. This area probably gave the name of ‘Jews’ to the nation.

Genesis chapter 38 contains the account of Judah’s family. He had three sons. The eldest son married Tamar, but died childless. Then Judah arranged for his second son to marry Tamar, hoping to raise a family in the name of the first son—but he too died without a child. This process of a younger brother of the deceased marrying his older brother’s widow, was later enshrined in the Law of Moses which God gave to His people (Deuteronomy 25:5). Judah instructed Tamar not to remarry, and promised that when his third son was grown up she would marry him, but when that son was old enough Judah failed to keep his promise.

So Tamar decided to take events into her own hands. She dressed as a prostitute and waylaid Judah, who slept with her. He didn’t have the means to pay her at the time so she kept his ring, bracelet and staff (or shepherd’s crook) as a pledge.

Tamar conceived by her father-in-law, and waited to see what would happen. After about three months Judah was told that his daughter-in-law had been unfaithful, and was pregnant. Amazingly he took a very hard line, and said she should be executed by burning.

Tamar then sent a messenger to Judah with his ring, bracelet and staff, saying that she was pregnant by the man whose they were. Judah must have been aghast by this, and of course identified them as his own. “She has been more righteous than me,” he said, because he should have given his third son to her. The death penalty was of course cancelled, and Judah had no further liaisons with Tamar.

When Tamar’s time arrived she gave birth to twins—Perez and Zerah. It is Perez who features in the line through King David and right along to Jesus.

Why Is This Written?

I admit that this is a very unusual part of the Bible, but life does have its weird moments. The fact that the Bible honestly records such distasteful events in the lives of the nation’s revered ancestors helps to show that it is authentic, and not the work of men.

Judah’s comment that Tamar was more righteous than himself holds the key. God had obviously decided that the family line of blessing should come through Judah. Tamar believed God’s promises and wanted to be a part of them. When Judah let her down, she took action herself and gave birth to his heir, for the child was counted as Judah’s own son and not as his eldest son’s heir.

It probably seems to us at first that Tamar did not follow a godly course of action. However, Judah commended her because she had shown up his folly. Her family became renowned in Israel. Later on another God-fearing woman, Ruth, was given a blessing before her marriage to the wealthy farmer Boaz: “May your house be like the house of Perez, whom Tamar bore to Judah” (Ruth 4:12).