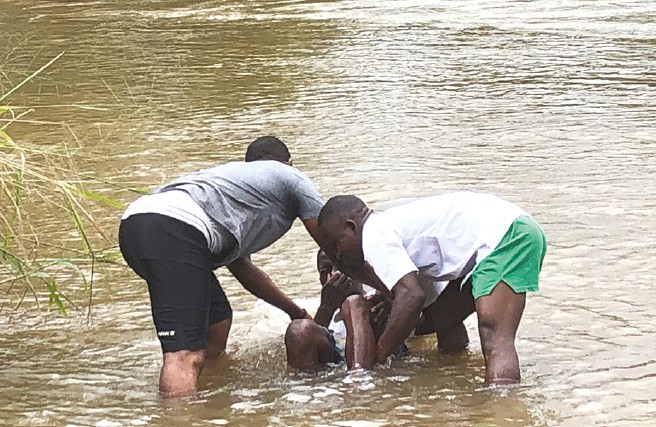 I CAN’T REMEMBER where Sylvester came from except that it was somewhere in the north of Kenya. This I do know, he’d had a long and arduous journey: setting out very early in the morning, mostly on foot with a stretch on the back of a pickup truck. At last he reached the small village where the Bible School was to be held.

As I stood up to teach I noticed Sylvester on the front row—smartly dressed as though he’d just walked out of a dressing room, and keen to listen.

We learned later that this was his first visit to a Christadelphian meeting of any kind. His sole previous contact with us was with an English lady who had used correspondence courses and letters to help give him a good understanding of what the Bible teaches. I was talking about the book of Revelation, and he was engrossed. He was the first to answer when I asked the audience a question, and the first with his hand up to ask his own questions.

At the Bible School he asked to be baptised into Jesus Christ. What a busy couple of days that was! There were many people wanting to be baptised. Some had been instructed by the elders of the church, others like Sylvester had been instructed via correspondence and were unused to being with other believers. It was their first opportunity to really discuss what they were coming to believe. And of course alongside these conversations the Bible School lessons provided a hectic schedule.

Before anyone was baptised, they gave a ‘confession of their faith’—we held a conversation with them to ensure that they really knew what they believed, and that their understanding of the Gospel was the same as the Christadelphian community they were about to join.

There was a shared appreciation that we were there to compare our growing faith together. There was an understanding that after their baptism each one must go on their way rejoicing (Acts 8:39) to face the future, whether in company with fellow believers or alone. Whatever their situation was, each would have confidence in what they believed and a firm assurance of the loving care of their heavenly Father and their beloved Lord Jesus Christ.

Sylvester was on a journey, and this was his first stop. He was a man on a mission. His priority was to get his “faith life” in order. Having discovered a community of believers with whom he could share his faith, his intention was to go on to train for a nursing career and find work in Nairobi.

So it was that we were to hear Sylvester confess his faith, late in the evening after our supper. The Bible Mission team gathered in the home that had been made available to us. Darkness had fallen and the room was lit by a single hurricane lamp. Once the meal was cleared away most of the family and visitors retired to the shadows. We sat, Sylvester and I, with a table between us, the lamp to one side on the table and open Bibles in front of us.

We began with a short prayer. Once our conversation had begun, Sylvester needed only gentle prompting to articulate each aspect of his growing faith. And he was articulate! His personal conviction, sincerity of faith and Bible-based understanding shone out of the darkness.

He had clearly thought through what his faith would mean in the rough and tumble of life—there would be challenging choices and decisions to make as he went on his way, but underlying it all there was an obvious joy that he had found something beyond price, a faith which would sustain him through everything that life could throw at him. As he spoke, it was as though everyone in the room was lifted to a different spiritual level. There were gasps of sweet surprise. Quiet, gentle sobs of happiness came from the shadows. To this day, years later, Sylvester’s confession of faith must rate as one of the most wonderful it has been my joy to hear.

We were of course pleased to baptise him the following day in a river near the village. He waded out into the water with a brother, who asked him “Do you believe the things concerning the kingdom of God and the name of Jesus Christ?” (Acts 8:12).

His answer rang out clear, “I do.”

“Then upon this public confession of your faith, I baptise you in the name of the Father, the Son and the Holy Spirit. May God bless you in your new life in Jesus Christ.” He was dipped under the water, and emerged a new man.

And Jesus came and said to them, “All authority in heaven and on earth has been given to me. Go therefore and make disciples of all nations, baptizing them in the name of the Father and of the Son and of the Holy Spirit, teaching them to observe all that I have commanded you. And behold, I am with you always, to the end of the age” (Matthew 28:18–20).

Sylvester was joined that day in baptism by seven others who also had prepared themselves and ‘witnessed a good confession’ (1 Timothy 6:12–13). What joy as we walked together back to the meeting hall, singing hymns as we went. In the hall it was time to share their first communion —the simple feast of bread and wine which is at the heart of the Christian’s life (Luke 22:19). The bread is a symbol of the body of the Lord Jesus which was given for us, the wine a symbol of his shed blood by which we are granted the forgiveness of sins and hope of life everlasting in the Kingdom of God.

Now as they were eating, Jesus took bread, and after blessing it broke it and gave it to the disciples, and said, “Take, eat; this is my body.” And he took a cup, and when he had given thanks he gave it to them, saying, “Drink of it, all of you, for this is my blood of the covenant, which is poured out for many for the forgiveness of sins” (Matthew 26:26-28).

It was my duty to welcome Sylvester and his new brothers and sisters into our world-wide Christadelphian fellowship.

I was representing the members of the church in that small village, and also his new family throughout the world. We reached out our hands all together, as an expression of joining in our one united faith, declaring that we would help and support each other on life’s way.

This was of course only the beginning. It was a new fresh start, confident in the blessing of God, the company day by day of the Lord Jesus, personal peace of mind, and the faithful anticipation of the Lord’s return to establish the Kingdom of God on earth.

The following morning we went our separate ways—rejoicing in hope, one in heart and mind.

Where would life take us? We have over the years since then just caught sight of each other across the miles around the world, each serving our Master in our different places, still confidently anticipating that glorious day of fulfilment when the Lord will come. Under the guiding hand of the Father, by His grace we will all come to His glorious Kingdom, never to be separated again.

He who testifies to these things says, “Surely I am coming soon” (Revelation 22: 20).