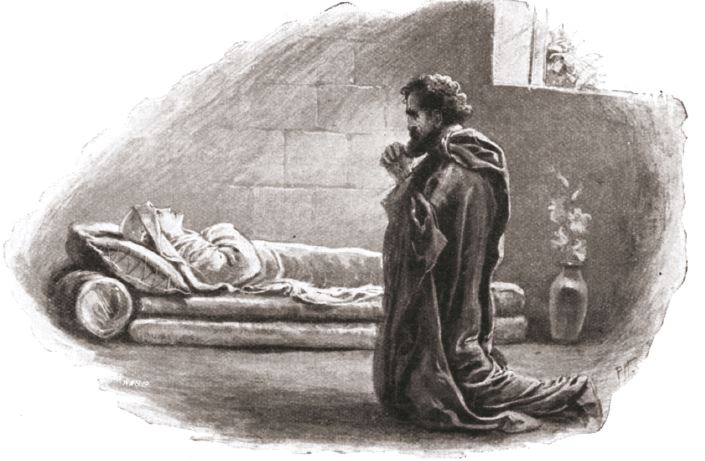 This is the fourth in a series in which we examine this fascinating Bible book. You can catch up with the previous articles at

IN THE FIRST part of Acts the narrative tends to follow the actions of the Apostle Peter. Peter had been one of the main disciples of Jesus, alongside James and John. After Jesus’ resurrection Peter was among the first to meet him alive, and he became an important figure in the early community of believers.

The Acts of Peter

In Acts chapter 2 Peter addressed a crowd in Jerusalem on the day of Pentecost: the first recorded public presentation of the Gospel after Jesus’ resurrection was spoken by Peter. Peter continued to be active in preaching. Had anyone wished to find Peter in Jerusalem at this time the best strategy would have been to find the largest crowd in the city; Peter would have been at the front of it, proclaiming the Gospel!

Peter’s activities soon made it difficult for him to remain in Jerusalem and he visited various other places to preach.

In Acts chapter 8 he visited Samaria. Philip had already preached there, but John and Peter went there to strengthen the new congregation of believers.

In Acts 9 Peter travelled around the coastal plain of Judea, where he performed miracles at Lydda and Joppa. In Lydda he healed Aeneas, who was bed-ridden with paralysis; Aeneas was now able to walk and to earn his living. In Joppa the miracle was even more astonishing: a woman named Tabitha had died, and Peter raised her from the dead. This caused a stir thoughout the region and the church in Joppa grew. Peter stayed on in Joppa.

In Acts 10 we have one of the turning points of the book. Peter proclaimed the Gospel to, and then baptised, the Roman centurion Cornelius and his companions. These were the first Gentiles to receive the Gospel.

Peter then returned to Jerusalem to explain his mission, and the baptism of Gentiles, to the other apostles.

In Acts 11 Peter was arrested by Herod the King (who ruled Judea from 41 to 44ad). He escaped with the assistance of an angel, but then left Jerusalem.

In Paul’s letter to the Galatians chapter 2:11 we learn that Peter came to Antioch on the Orontes River (which was then in Syria but is now in Turkey).

The Gospel to the Gentiles

In Acts 15 Peter was present at the Council of Apostles in Jerusalem, at which the Apostles decided how to deal with the large number of Gentiles who formed the new congregations founded by Paul, and how to manage their relations with Christians from a Jewish background.

One of the main issues in Acts is the relationship of the new Christian community to the Jewish community of the time. As a result of Peter’s teaching, Gentiles were baptised for the first time. From this point onwards the Christian community contained both Jews and Gentiles. It was then necessary to decide what the requirements would be for the behaviour of the Gentile members. Should they keep the whole of the Jewish Law? Should they eat a Jewish Kosher diet?

The theme of the relationship between believers from a Jewish background and those from a Gentile background recurs over and over again in the New Testament as groups of Jewish believers attempted to overturn the divinely inspired decision of the Apostles and make the Gentile converts follow the Jewish Law. This is only a minor theme in the letters, but its presence is further evidence that the letters were written during the same period and share the same background as Acts.

The background to the conversion of Cornelius (in Acts chapter 10) is significant. Peter may have been a major figure in the congregation in Joppa, but he didn’t use this for his own profit. While he was living in Joppa he was in the house of Simon the tanner. At the time tanning was a filthy trade, which prepared the skins of dead animals using a variety of animal products to process them. The smell alone would be overpowering and disgusting.

It was while Peter was there that he received messengers from Cornelius in Caesarea. He was to go to Caesarea to explain the Gospel to him. Peter was in a quandary. He had been brought up to think of Gentiles as inferior, people with whom he should have as few dealings as possible. But before the messengers arrived he had a dream from God. The message of this was that God had declared Gentiles to be acceptable; Peter should not argue with this.

Cornelius was a senior Roman military officer. He had no doubt had reports from Judea (the Roman part of the area—Galilee was outside the empire at the time) about Jesus. Now an angel had told him to send for Peter and listen to what he said. So Peter told him the truth, the way that Jesus taught and healed, the fact that he was raised from the dead. Cornelius and his companions were baptised; Gentiles had joined the Christian community.

Peter’s work took him to Antioch, where he was temporarily diverted from the Gospel by Jewish Christians from Jerusalem who brought a fake message which appeared to come from the other apostles (Galatians 2:11–13). After this there was another council in Jerusalem where the reality of the matter was decided. This council is recorded in Acts 15.

Then we lose sight of Peter for some time. There is some evidence from outside the Bible that he visited Rome with Mark, and that shortly after this Mark wrote his Gospel, which mostly appears to contain information given to him by Peter. There is certainly good evidence that the Gospel of Mark is associated with Peter and it does contain some Latin words which suggests that it may have been written after Mark had visited Italy.

Peter may have visited Rome, but we know there was at least one congregation of Christians in Rome before he arrived. When Peter gave his speech on the day of Pentecost there were Romans in the audience (Acts 2:10). Some of these may have been baptised and might have returned to Rome to establish a congregation there. By the time that Paul wrote his Letter to the Romans there were several congregations there; Paul seems to refer to at least four of these in his letter.

The career of Peter is clearly described until after the Council of Jerusalem in Acts 15; he is unlikely to have visited Rome before this time. After this Mark went to Cyprus. If this took a year, he would have been available to go to Rome only after 50ad. By this time there would have been a considerable community of believers in Rome.

So it seems certain that Peter was not the first ‘bishop of Rome’, as is sometimes claimed. He may have been there, but it was to visit congregations of Christians that already existed.

At the end of the New Testament period Peter wrote his two letters to the Christians in Asia Minor. These were written around 64ad, much later than the last of Peter’s appearances in the Acts of the Apostles. His letters are full of references to the coming persecution of Nero. It is likely that they were written from Rome, which is identified as “Babylon” (1 Peter 5:13). If this is correct, Peter probably died in the persecution that followed only a few months after his second letter was written. He had faithfully proclaimed the same Gospel, from the death of his Lord until his own death.