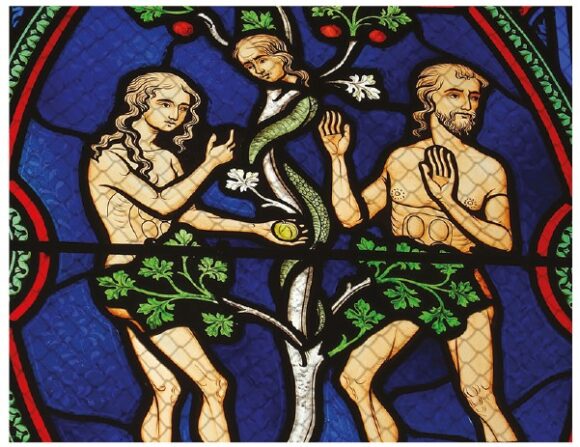 GENESIS CHAPTER 3 tells how Adam and Eve brought a curse upon humankind when they ate the fruit of the Tree of Knowledge, after they were lied to by the serpent. This is referred to as a literal occurrence throughout the Bible (for example 1 Timothy 2:13–14, 2 Corinthians 11:3 and Jude 14). As well as being a real event, it also contains great symbolic significance. There are vital lessons here about the process of sin (rebellion against God) which separates us from Him, and the process by which we must be reconciled to Him.

Now the serpent was more crafty than any other beast of the field that the Lord God had made. He said to the woman, “Did God actually say, ‘You shall not eat of any tree in the garden’?” And the woman said to the serpent, “We may eat of the fruit of the trees in the garden, but God said, ‘You shall not eat of the fruit of the tree that is in the midst of the garden, neither shall you touch it, lest you die.’” But the serpent said to the woman, “You will not surely die. For God knows that when you eat of it your eyes will be opened, and you will be like God, knowing good and evil.” So when the woman saw that the tree was good for food, and that it was a delight to the eyes, and that the tree was to be desired to make one wise, she took of its fruit and ate, and she also gave some to her husband who was with her, and he ate (Genesis 3:1–6).

The Process of Sin

I’ve highlighted three key words which illustrate the process of Eve’s sin. These same Hebrew words occur in the same order in each of the following examples of other people succumbing to sin:

When man began to multiply on the face of the land and daughters were born to them, the sons of God saw that the daughters of man were attractive. And they took as their wives any they chose (Genesis 6:1–2).

And Achan answered Joshua, “Truly I have sinned against the Lord God of Israel, and this is what I did: when I saw among the spoil a beautiful cloak from Shinar, and 200 shekels of silver, and a bar of gold weighing 50 shekels, then I coveted them and took them. And see, they are hidden in the earth inside my tent, with the silver underneath” (Joshua 7:20–21).

It happened, late one afternoon, when David arose from his couch and was walking on the roof of the king’s house, that he saw from the roof a woman bathing; and the woman was very beautiful. And David sent and enquired about the woman. And one said, “Is not this Bathsheba, the daughter of Eliam, the wife of Uriah the Hittite?” So David sent messengers and took her, and she came to him, and he lay with her (2 Samuel 11:2–4).

Notice the pattern. There is something we know we should not have. We see it, it looks desirable, and we take it. The end result is the same as Eve’s—we dishonour our Creator and incur His judgment.

The Process of Reconciliation

Before they sinned Adam and Eve were ‘both naked and were not ashamed’ (Genesis 2:25). But after their sin ‘the eyes of both were opened, and they knew that they were naked. And they sewed fig leaves together and made themselves loincloths’ (Genesis 3:7). They tried to hide their nakedness by their own ingenuity. It did not work.

It was for God to provide effective clothing for them: ‘And the Lord God made for Adam and for his wife garments of skins and clothed them’ (v. 21). They had sinned, God killed an animal to cover their shame, and in this way He foreshadowed how He would eventually provide the means of bringing people back to Him by the sacrifice of His Son Jesus Christ. These are words of John the Baptist: ‘The next day he saw Jesus coming towards him, and said, “Behold, the Lamb of God, who takes away the sin of the world!” (John 1:29).

We are all Eve’s children. We all rebel against God, and our sin separates us from Him. But He is merciful and gracious, and He has provided a way for our shame to be done away:

The one who conquers will be clothed thus in white garments, and I will never blot his name out of the book of life. I will confess his name before my Father and before his angels (Revelation 3:5).