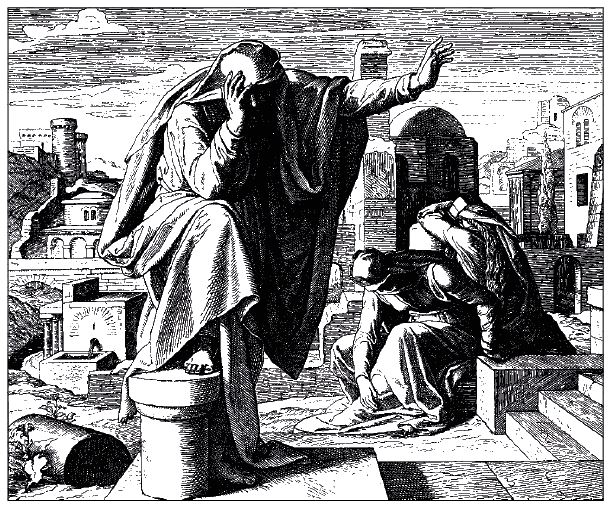 AFTER the Babylonian invasion of 586 bc, Jerusalem and its temple lay in ruins. The inspired writer (probably Jeremiah) knew that these troubles had been allowed by God because of His people the Jews’ refusal to respond to Him.

The book of Lamentations contains a series of poems about the desolation of Jerusalem and the sufferings of the Jews.

Chapter 1 is a sad commentary on the plight of the Jews, who would be despised and rejected by the world, just as God had been despised and rejected by them. The lamentations about God and His people are reflected in the sorrows and sufferings of Jesus. He bore “the yoke in his youth” (3:27) and gave “his cheek to the one who strikes him” (3:30) for the transgressions of others. These are echoes of Isaiah’s great prophecy of Jesus Christ:

He was oppressed and he was afflicted, yet he opened not His mouth; he was led as a lamb to the slaughter, and as a sheep before its shearers is silent, so he opened not his mouth. He was taken from prison and from judgment, and who will declare his generation? For he was cut off from the land of the living; for the transgressions of My people he was stricken (Isaiah 53:7–8).

The book of Lamentations uses a poetic form called an acrostic: three of the five chapters (chapters 1, 2 and 4) have 22 stanzas corresponding to the number of the letters in the Hebrew alphabet; each verse commences with a letter of the alphabet, in order. Chapter 3 has 66 shorter verses, and groups of three verses start with the same letter. Chapter 5 does not follow an alphabetical pattern.