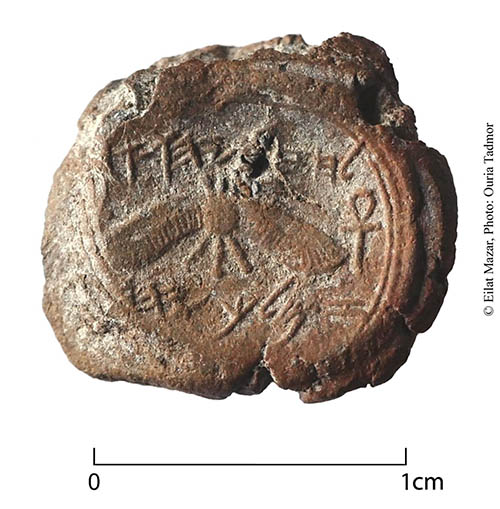 Archaeologists study history by looking at ancient sites and artefacts.

In this series we look at some fascinating archaeological finds. They cast light on the world and events that we read about in the Bible, and they provide evidence that the Bible record is true.

Hezekiah was one of the greatest Jewish kings. He reigned in Jerusalem around 715 to 686 BC.

He was a sincere worshipper of God, unlike his father, Ahaz, who worshipped the idols from neighbouring nations.

The Lord was with him; he prospered wherever he went (v7).

A Figure of History

Archaeological digs around the Temple Mount in Jerusalem have unearthed a fascinating insight into Hezekiah’s life, in the form of little clay disks called ‘bullae’.

In the ancient Near East official letters were written on scrolls which were rolled up and tied with string, which was then fixed with a lump of wet clay. A pattern was impressed into the clay, usually with a signet ring, then it was left to dry. The letter could not be opened without the clay ‘bulla’ being removed. So when you received a scroll with its bulla intact you could be sure that it had not been tampered with, and the impression on the bulla would tell you who it was from.

A number of the bullae that have been found are of particular interest because they bear the inscription in ancient Hebrew: ‘Belonging to Hezekiah son of Ahaz, king of Judah’.

Think of that – two and a half thousand years ago these little disks were stamped, probably with the ring on the finger of king Hezekiah himself!

Discovery of these bullae provides confirmation that Hezekiah was who the Bible says he was, and also further evidence that Jerusalem in the time of the kings was indeed the sophisticated administrative capital the Bible describes, and not just a primitive hill fort as was previously suggested by sceptical historians.

Interestingly there are two designs of Hezekiah’s seal: one shows a winged dung beetle and the other shows a winged sun. Both motifs were common in royal seals at the time.

The dung beetle often occurs in Egyptian religious imagery – it represents Ra the sun god. Scholars are not sure why this heathen design appears on the seal of Hezekiah who was an ardent worshipper of the God of Israel.

The suggestion is that this design dates from early in Hezekiah’s reign, when he had inherited the administration from his idol-worshipping father Ahaz; then later on he replaced the beetle with the sun motif. What better emblem for a man of God like Hezekiah?

For the Lord God is a sun and shield;

The Lord will give grace and glory;

No good thing will He withhold

From those who walk uprightly.

Blessed is the man who trusts in You!