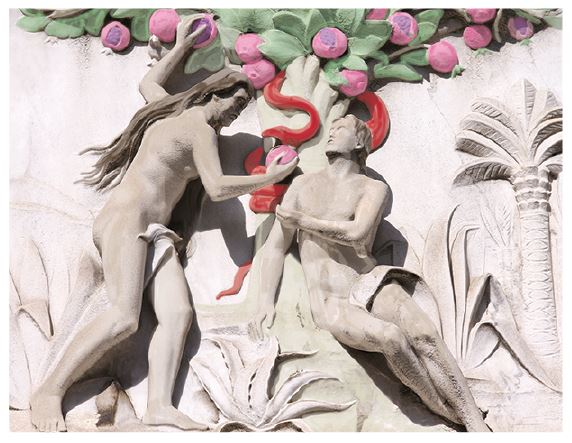 THERE ARE MANY profound and practical lessons we can learn from meditating upon the first pages of the Bible —the beginning of the book of Genesis. The origin of temptation, the shame and fear which follows sin, and how to deal with these problems are themes from the lives of Adam and Eve which are all brought out in the New Testament in the first letter of John. By increasing our understanding of these themes, we can learn much about what it means to be a disciple of the Lord Jesus.

Adam and Eve were the first people. Their creation is described in Genesis 1 and 2. They were created ‘very good’

(Genesis 1:31), but they were both capable (like all of us) of experiencing lust and temptation. They were given a test: the serpent challenged Eve to disobey God and eat the forbidden fruit. “So when the woman saw that the tree was good for food, that it was pleasant to the eyes, and a tree desirable to make one wise, she took of its fruit and ate. She also gave to her husband with her, and he ate” (Genesis 3:6).

Eve was tempted by what she saw—the fruit is described as being ‘pleasant to the eyes’. But everything changed when she broke God’s law, and now all her descendants have an inbuilt tendency to ‘do our own thing’. We learn in John’s letter that this set of desires does not come from God but from our fallen human nature: “For all that is in the world—the lust of the flesh, the lust of the eyes, and the pride of life—is not of the Father but is of the world” (1 John 2:16).

When we give in to the lust of the eyes and sin against God, we can experience fear. This began with Adam:

And they heard the sound of the Lord God walking in the garden in the cool of the day, and Adam and his wife hid themselves from the presence of the Lord God among the trees of the garden. Then the Lord God called to Adam and said to him, “Where are you?” So he said, “I heard Your voice in the garden, and I was afraid because I was naked; and I hid myself” (Genesis 3:8–10).

Elsewhere in the Bible we are told that the respectful fear of God is a positive and necessary attribute (for example Exodus 20:20), but this is a different type of fear. Adam’s fear caused him to hide from God: the very opposite of the relationship God desires to have with His children. When we know we have done wrong in God’s sight, we can feel like hiding from Him—not praying to Him, not reading the Bible, and turning away from His ways. This is not the solution.

But the anointing which you have received from Him abides in you, and you do not need that anyone teach you; but as the same anointing teaches you concerning all things, and is true, and is not a lie, and just as it has taught you, you will abide in him. And now, little children, abide in him, that when he appears, we may have confidence and not be ashamed before him at his coming (1 John 2:27–28).

This is not easy language. What is the ‘anointing’ he’s speaking of? Jesus explained that the Holy Spirit was to be given to the disciples in order to teach them (John 14:26). Guided by the Spirit the New Testament was written, so the ‘anointing’ is a lovely description of the operation of the Word of God in the believer’s life. If you ‘abide’ (if you live) in the teaching of the Holy Spirit, there will be no reason to be ashamed when Christ returns.

Fear of Christ’s return is damaging. How can the disciple tackle such a detrimental emotion? Again, John provides the solution:

God is love, and he who abides in love abides in God, and God in him. Love has been perfected among us in this: that we may have boldness in the day of judgment; because as he is, so are we in this world. There is no fear in love; but perfect love casts out fear, because fear involves torment. But he who fears has not been made perfect in love (1 John 4:16–18).

Adam did not have boldness when the Father questioned him; he was afraid. The solution to Adam’s response to sin is ‘perfect love’. Perfect love can only come about through abiding in God’s teaching, thereby dwelling in God. The result of this is that fear will be cast out, and replaced by boldness.