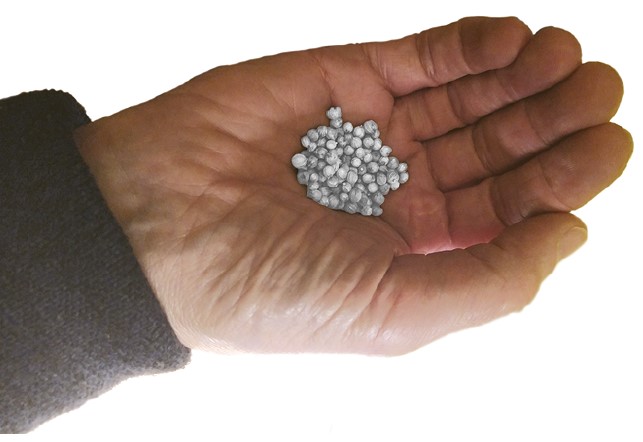 AN EMINENT PSYCHOLOGIST has promoted the idea that people have a hierarchy of needs. By this he means that some human needs are basic to existence, and take precedence over everything else. Others are less vital, and only begin to be important to a person when they have satisfied the basic ones. One of the most fundamental needs of all, he said, is food. He pointed out that a starving person will steal, fight, and even kill to satisfy his hunger, overcoming all his normal, civilized restraints.

Well, the people of Israel began to go hungry, six weeks after leaving Egypt. The euphoria of the escape from slavery had worn off, and many miles of footslogging across a bleached, sterile wilderness had tried their patience. Now a serious threat hung over them. The supplies of grain and dried food they had brought with them from Egypt were dwindling fast. They started to ration what they had left. The cattle had to go hungry. It is unpleasant to have to refuse children food they desperately need, and an empty stomach makes the sweetest person irritable and cross.

Once again Moses bore the brunt of their complaints. ‘And the whole congregation of the people of Israel grumbled against Moses and Aaron in the wilderness, and the people of Israel said to them, “Would that we had died by the hand of the Lord in the land of Egypt, when we sat by the meat pots and ate bread to the full, for you have brought us out into this wilderness to kill this whole assembly with hunger”’ (Exodus 16:2–3). Moses, helpless, prayed to the Lord. The answer was swift and impressive. God promised Moses He would satisfy their hunger the very next morning. ‘Behold, I am about to rain bread from heaven for you, and the people shall go out and gather a day’s portion every day, that I may test them, whether they will walk in my law or not’ (v. 4).

Next morning they crawled out of their tents at first light, curious to see if anything had happened. As usual, the dew lay sparkling in the sun. But this time, as it evaporated, ‘there was on the face of the wilderness a fine, flake-like thing, fine as frost on the ground’ (v. 14). It was like nothing they had ever seen before. ‘What is it?’ they asked (v. 15), and the phrase stuck. “What is it?”, or “Manna” in our anglicised Hebrew, is the name by which it became known. The description of manna is unique: white in colour, sweet to taste, and the size and shape of coriander seed.

The gift of manna is an interesting study from three points of view. Firstly, despite naturalistic suggestions as to what manna might have been, there is no doubt that the provision of it was a miracle. One theory is that manna was a secretion of the tamarisk tree, which grows in the wilderness and which does exude a sweet-tasting substance when its bark is punctured by insects. Some claim the manna was secreted by the insects themselves, like the honeydew that falls from Iime trees In summertime. But there are several objections to these ‘explanations’. Firstly, the manna failed to appear on Saturdays. Then, the plant secretions described above are highly seasonal. They are not there in winter. In any case, sheer scale rules out this approach. With well over two million people to feed (Exodus 12:37), there could never have been enough secretion within range of the camp to provide their staple diet for 40 years.

Why should we need to question the simple statement that God fed them with ‘bread from heaven’?

Secondly, the subject of manna crops up in a passage in Deuteronomy, which Jesus quoted during his temptation in the wilderness (Matthew 4:4).

[God] humbled you and let you hunger and fed you with manna, which you did not know, nor did your fathers know, that he might make you know that man does not live by bread alone, but man lives by every word that comes from the mouth of the Lord (Deuteronomy 8:3).

Moses is saying that God quite deliberately allowed the Israelites to run out of food, to teach them that their lives hung upon His word. He was testing them. They could not go back to Egypt, because they had no food left for the journey. They were stranded in the desert. They were 100% dependent on Him.

The sober fact is that for all of us, this is always true. Where does our daily bread come from? We plough the fields and put seeds in the ground, or if we do not do this ourselves we pay farmers to do it for us. In either case, having planted the seed, we assume (usually without surprise or gratitude) that it will rain to help the seed germinate, and that the sun will shine, to allow the wheat to grow and produce grain.

Yet neither of these vital factors is under our control. Both depend on God’s promise that seedtime and harvest, cold and heat, summer and winter, day and night, shall not cease (Genesis 8:22). It is God who provides the energy that keeps the ecosystem fuelled, permitting us to live.

Now we can see why Jesus advised us to pray to God for daily bread (Matthew 6:11). It is not ours by right. It comes because God graciously keeps His word. And as Jesus pointed out, such is His grace that He sends His rain on the just and on the unjust (Matthew 5:45), giving even His enemies life, and with it time to repent.

But the Israelites’ case was still more impressive. God had promised that He would bring them safely across the wilderness to Canaan. Faced by a bread shortage, they doubted His power to keep that promise. They moaned that they were going to die in the wilderness. Jesus, hungry in the wilderness, was in a similar position (Matthew 4:1–11). God had given him a great work to do, which he had begun 40 days before at his baptism. Now, weak from hunger, he was tempted to use his new powers to turn stones into bread, to make sure he would not die prematurely. But Jesus had more faith than the Israelites. Although he was very hungry, he knew his Father would not let him down. He was prepared to wait for God. He was right. When the temptations ended, ‘angels ministered to him’ (v. 11).

The great lesson we have been shown is that, despite appearances, the demand for food is not actually the most basic of human needs. Even before that, we need God. When we face disaster or tragedy like the Israelites, we need to go down on our knees and seek the help of God. Sometimes He allows us to run out of our own resources, to teach us to trust in Him. There is a saying: ‘Sometimes God sets us on our back, so that we can see his face!’

The Bread of Life

This brings us to the third, and most important, aspect of the manna in the wilderness. The heavenly food that saved the lives of the people was, says Jesus, a foreshadowing of himself.

I am the bread of life. Your fathers ate the manna in the wilderness, and they died. This is the bread that comes down from heaven, so that one may eat of it and not die (John 6:48–50).

The manna in the wilderness only kept the people alive from one day to the next. It did not change them from mortal to immortal. But Jesus promises us he will do precisely that if we really believe in him. He was the Iiving Word of God, created in the womb of Mary by the power of his Father. He teaches us the words of eternal life (John 6:63).

Jesus’ loving sacrifice of himself is remembered by his followers each week in the service that is known as the Breaking of Bread, or Communion.

The bread they share, the symbol of Jesus’ body nailed to the cross, reminds them that Jesus has brought salvation, not from mere hunger, but from the power of the grave. ‘Whoever feeds on this bread will live for ever,’ he promised (John 6:58). As it was with the people in the wilderness, we are 100% dependent on the goodness of God in sending the bread of life. We did not plough the field or sow the seed that brought the bread from heaven. ‘By grace you have been saved through faith,’ says the Apostle Paul. ‘And this is not your own doing; it is the gift of God’ (Ephesians 2:8).

“Now as they were eating, Jesus took bread, and after blessing it broke it and gave it to the disciples, and said, “Take, eat; this is my body.” And he took a cup, and when he had given thanks he gave it to them, saying, “Drink of it, all of you, for this is my blood of the covenant, which is poured out for many for the forgiveness of sins. I tell you I will not drink again of this fruit of the vine until that day when I drink it new with you in my Father’s kingdom.”“