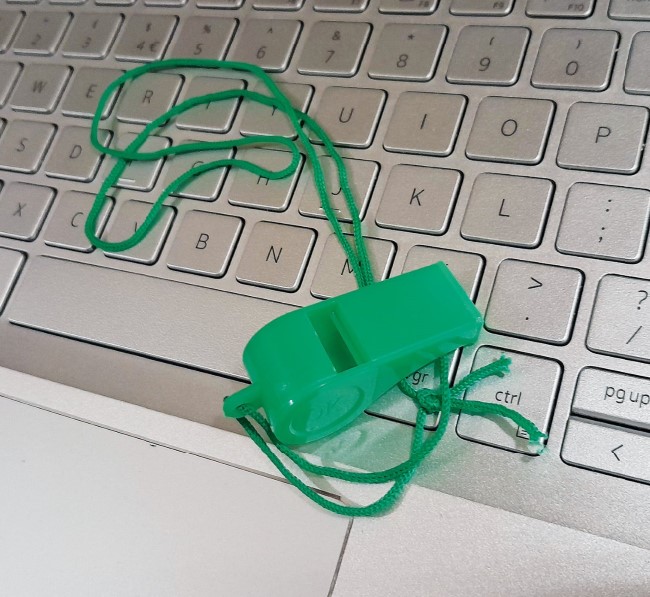 A WHISTLE-BLOWER is someone who blows a whistle to warn people of a problem. Referees in sport blow whistles to flag a rule being broken; police used to blow whistles to alert people to crimes.

The modern use of the term refers to workers who report wrongdoing, usually in their workplace. Such reports do not relate to a personal grievance, but must be in the public interest. They can be about something in the past, in the present or something that the worker believes is about to happen.

For example, people’s lives may be at risk. Many, but not all, countries have laws protecting whistle-blowers. Under these laws whistle-blowers should be respected and should not be treated unfairly for their actions. In some cases they can be protected by remaining anonymous. Nonetheless, even in countries whose laws offer protection, many potential whistle- blowers are reluctant to come forward because they fear repercussions. Others report having been regarded as traitors and even threatened by the very people who should have cared about and responded to their concerns.

God’s prophets often had hard messages to give to His people. God told these faithful men to warn the people about what they had done wrong, what they were still doing wrong, and about the disastrous consequences if they did not change their ways. The prophets had no option to be anonymous, and their messages were quite clearly in the public interest. But they were often ill-treated by the leaders of the people, and put their lives at risk to deliver the messages. The faithful man Nehemiah confessed this in a humble prayer to God:

They were disobedient and rebelled against you and cast your law behind their back and killed your prophets, who had warned them in order to turn them back to you, and they committed great blasphemies (Nehemiah 9:26).

Jesus ‘went about doing good’ (Acts 10:38), but the religious authorities hated both his words and his miracles. They were desperate to try to stop him and to prevent people from believing in him. After Jesus had healed a man who had been born blind they were furious. When the man kept talking about this miracle they excommunicated him. The full story is in John chapter 9.

This antagonism to Jesus and his message continued after his ascension to heaven. The apostles continued preaching about Jesus, and the religious authorities—the very ones who should have been interested and committed—tried to stop them. Peter spoke frankly to people in Jerusalem about what had happened to Jesus and about the danger they were all in:

You denied the Holy and Righteous One, and asked for a murderer to be granted to you, and you killed the Author of life, whom God raised from the dead. To this we are witnesses… Repent therefore, and turn again, that your sins may be blotted out (Acts 3:14–19).

The authorities commanded the apostles not to preach in the name of Jesus any more (Acts 4:17–18, 5:40). But nothing could stop them: the apostles were convinced of the truth of what they were saying, and genuinely concerned about the predicament of unbelievers. And what could be more in the public interest than telling people how they could be saved from destruction? Some of the apostles were killed for preaching. Just before his murder by stoning, Stephen witnessed to the religious leaders:

You stiff-necked people, uncircumcised in heart and ears, you always resist the Holy Spirit. As your fathers did, so do you. Which of the prophets did your fathers not persecute? And they killed those who announced beforehand the coming of the Righteous One, whom you have now betrayed and murdered (Acts 7:51–52).

The Gospel message is a wonderful message of love and hope from Almighty God. Jesus Christ is central to this message. But without responding to it we are completely lost and without hope. In one of his letters the Apostle Paul reminds believers that before their conversion they were in a desperate position:

Remember that you were at that time separated from Christ, alienated from the commonwealth of Israel and strangers to the covenants of promise, having no hope and without God in the world (Ephesians 2:12).

This is not a popular message. We like to imagine that we are basically good people and that God will therefore let us live for ever. But this is not the Bible message. Repentance—changing our attitudes and our ways and trying to follow Jesus—is mentioned time and time again.

In ancient times the watchman would blow a trumpet to warn his city’s inhabitants about impending danger. If he failed to sound the alarm the city could be overrun by the enemy and the people killed. When he sounded the trumpet the people had opportunity to prepare.

The Bible is blowing a loud warning to urge us to respond. As God said to His prophet Ezekiel: ‘So you, son of man, I have made a watchman for the house of Israel. Whenever you hear a word from my mouth, you shall give them warning from me’ (Ezekiel 33:7).

Let us take notice of the Bible: it is a life- saving message to us.