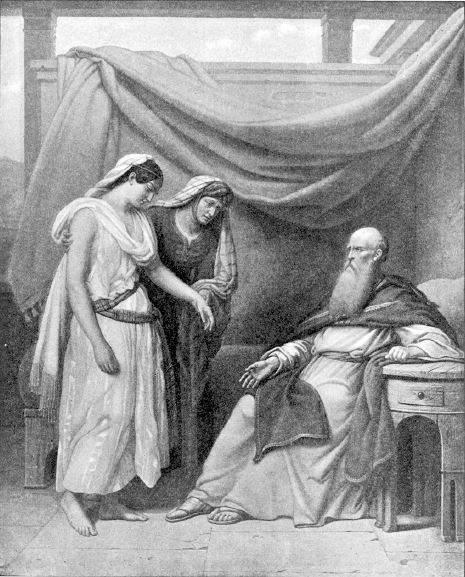 The ongoing tension between the state of Israel and its Arab neighbours is seldom out of the news. Often it erupts into outright violence, and there are real concerns that a conflict in the Middle East could turn into a world war.

Who has entitlement to the land that is called Israel, and its capital city Jerusalem? Does it belong to the Jews or to the Arabs? Or, as the peacemakers suggest, should it be divided into two states?

Christadelphians are not involved in politics. This article does not make a political statement—it examines the Bible’s view of the subject.

We start in the book of Genesis chapter 12 where we’re introduced to Abraham—a man who is revered by Jews and Arabs because he is the ancestor of them both.

Now the Lord had said to Abram: “Get out of your country, from your family and from your father’s house, to a land that I will show you. I will make you a great nation; I will bless you and make your name great; and you shall be a blessing. I will bless those who bless you, and I will curse him who curses you; and in you all the families of the earth shall be blessed” (Genesis 12:1–3).

The Jews and the Arabs are descended from Abram (whose name God later changed to Abraham), through different children. They each claim to themselves the blessings which God promised to Abraham, including the right to the land which the Jews call Israel and the Arabs call Palestine.

God had made great promises to Abraham, including “I will make you a great nation”. So he needed to have children. But both Abraham and his wife Sarai grew old, and they had no child. So their faith waivered, and they thought God might need assistance: Sarai gave to her husband her servant Hagar to be his concubine, so she could have a child which Sarai could call her own (Genesis 16).

Gently but firmly, God showed Abraham that he should not try to take things into his own hands. The promises would be fulfilled by means of a son who would be born to Sarai:

Then God said to Abraham, “As for Sarai your wife, you shall not call her name Sarai, but Sarah shall be her name. And I will bless her and also give you a son by her; then I will bless her, and she shall be a mother of nations; kings of peoples shall be from her.” Then Abraham fell on his face and laughed, and said in his heart, “Shall a child be born to a man who is one hundred years old? And shall Sarah, who is ninety years old, bear a child?” And Abraham said to God, “Oh, that Ishmael might live before You!” Then God said: “No, Sarah your wife shall bear you a son, and you shall call his name Isaac; I will establish My covenant with him for an everlasting covenant, and with his descendants after him. And as for Ishmael, I have heard you. Behold, I have blessed him, and will make him fruitful, and will multiply him exceedingly. He shall beget twelve princes, and I will make him a great nation. But My covenant I will establish with Isaac, whom Sarah shall bear to you at this set time next year” (Genesis 17:15–21).

Isaac was born, as God said. And the Bible story focuses on him and his descendants. The Arabs were given a promise and a blessing, because they are Abraham’s children; but it was to be Isaac’s descendants with whom God made His ‘covenant’—that is, the agreement that they would be His special people.

In time Isaac had two sons, Esau and Jacob. Esau was the elder and he had a blessing of his own, but the covenant promise was given to Jacob. This was because Jacob was a man of faith, whereas Esau was a ‘profane person’ (Hebrews 12:16)—that is, he cared for earthly things rather than spiritual things.

Esau became the ancestor of the Edomites, the Arab peoples who inhabited the region south of the Dead Sea. Jacob’s name was changed to Israel:

Then God appeared to Jacob again, when he came from Padan Aram, and blessed him. And God said to him, “Your name is Jacob; your name shall not be called Jacob anymore, but Israel shall be your name.” So He called his name Israel. Also God said to him: “I am God Almighty. Be fruitful and multiply; a nation and a company of nations shall proceed from you, and kings shall come from your body. The land which I gave Abraham and Isaac I give to you; and to your descendants after you I give this land” (Genesis 35:9–12).

So the Bible is clear—God’s special promises were to the people of Israel. But this is not the whole story.

The Bible book of Joshua tells how the people of Israel conquered the land after God saved them from slavery in Egypt. The land at this time was called Canaan, and they conquered it from the Canaanites.

They occupied the land for the next six and a half centuries, during which time they became a kingdom. The kingdom became so corrupt and godless that God brought the army of Babylon against them to end their occupation. He pronounced His judgement on the last king Zedekiah:

Now to you, O profane, wicked prince of Israel, whose day has come, whose iniquity shall end, thus says the Lord God: “Remove the turban, and take off the crown; nothing shall remain the same. Exalt the humble, and humble the exalted. Overthrown, overthrown, I will make it overthrown! It shall be no longer, until he comes whose right it is, and I will give it to Him” (Ezekiel 21:25–27).

Since that time there has been no Jewish king over Israel. (King Herod at the time of Jesus was not a Jew.) So who is “he whose right it is”? Who is entitled to take the crown?

When God made His promises, He often spoke of a ‘seed’. For example, He once said to Abraham:

Blessing I will bless you, and multiplying I will multiply your descendants as the stars of the heaven and as the sand which is on the seashore; and your descendants shall possess the gate of their enemies. In your seed all the nations of the earth shall be blessed, because you have obeyed My voice (Genesis 22:17–18).

‘Seed’ is a word the Bible often uses for ‘descendants’—but notice that these verses speak of both ‘descendants’ and ‘seed’.

In his letter to the Galatians, the Apostle Paul explains:

Abraham was promised descendants as numerous as the stars of heaven, and he was also promised one special seed. In time this was revealed as Jesus Christ, the Son of God. Jesus was a Jew, a descendant of Jacob, Isaac and Abraham, and he is the focus of all the promises God made to them. This is what the angel Gabriel said to Mary when he told her she was to have a son:

Then the angel said to her, “Do not be afraid, Mary, for you have found favour with God. And behold, you will conceive in your womb and bring forth a Son, and shall call His name Jesus. He will be great, and will be called the Son of the Highest; and the Lord God will give him the throne of his father David. And he will reign over the house of Jacob forever, and of his kingdom there will be no end” (Luke 1:30–33).

The land of Israel, or Palestine, actually belongs neither to the Jews nor to the Arabs, but to the Lord Jesus Christ!

Jesus has not received that kingdom yet—he has still to fulfil the promises to Abraham, and take possession of the Land.

The Bible contains many prophecies of the events surrounding the return of Christ to the earth. For example Ezekiel 38 describes the nation of Israel regathered to their land after a long exile (verse 8—this became possible when the nation of Israel was established in 1948). They are invaded by a confederacy of nations led by a northern power. God Himself intervenes and saves them (verse 18).

And Isaiah 2 looks forward to the Kingdom of God itself, when Jesus Christ is ruling from “the throne of his father David” in Jerusalem: