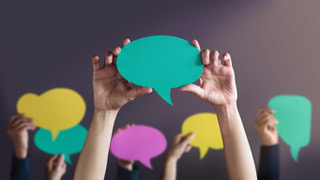 The tragic attack on Salmon Rushdie has provoked outcries about the importance of free speech.

‘Free speech’ is defined as the right of a person or group of people to express opinions without restriction by government. Many countries, including USA where Salmon was attacked, have this enshrined in law. In other parts of the world this principle is not accepted. For example, in some countries preaching Christianity is strictly forbidden. This is not new. In the first century the Jewish religious authorities tried, albeit unsuccessfully, to prohibit the disciples from teaching in the name of Jesus (Acts 5:27–29).

Even where ‘free speech’ is promoted, there are restrictions; for example, where the language would genuinely threaten health, safety or national security. But the Bible goes further than this. The Jews were strictly forbidden to misuse the name of God.

You shall not take the name of the Lord your God in vain, for the Lord will not hold him guiltless who takes His name in vain (Exodus 20:7).

In fact, blasphemy was punishable by death. Ironically, Jesus was delivered up to be crucified for what the Jews classed as blasphemy. This was because he said he was the son of God, which indeed he was.

Bible truth is often contrary to the ‘spirit of the age’, and so is not always well received. But like the apostles, this should not deter Jesus Christ’s followers from presenting its message. Of course, we must always be careful how we speak. God has not given us the freedom to speak as we wish. Time and time again the Bible warns us about speech that is filthy, malicious, untrue, deceiving, cursing or corrupt.