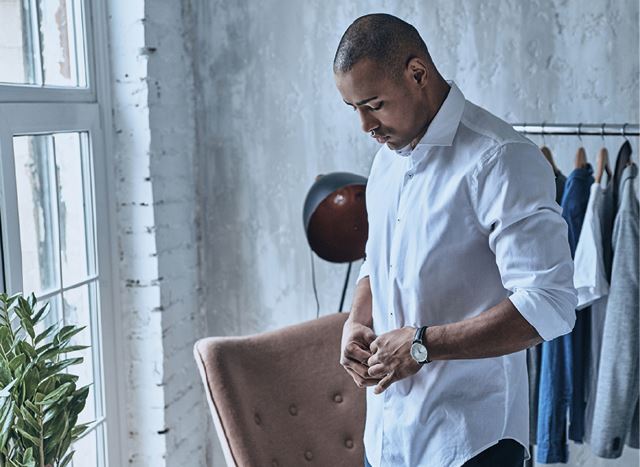 TO BE A FOLLOWER of Christ is to try to be like him. In the Apostle Paul’s words,

it is to put on Christ like a garment: “For as many of you as were baptized into Christ have put on Christ” (Galatians 3:27). It is to take off your old way of life, and put on a new one. In another of Paul’s letters he says “Put on the Lord Jesus Christ, and make no provision for the flesh, to fulfil its lusts” (Romans 13:14).

The Christian is a new person, a ‘new creation’ (2 Corinthians 5:17), changing their ways of thinking and living to match Christ’s requirements of his disciples.

The Christian life starts with baptism—immersion in water. This is crucial. Paul explains that baptism is a symbollic way of putting our old way of life to death and giving birth to a new way of life:

Do you not know that as many of us as were baptized into Christ Jesus were baptized into his death? Therefore we were buried with him through baptism into death, that just as Christ was raised from the dead by the glory of the Father, even so we also should walk in newness of life. For if we have been united together in the likeness of his death, certainly we also shall be in the likeness of his resurrection, knowing this, that our old man was crucified with him, that the body of sin might be done away with (Romans 6:3–6).

To become Christlike, at the very start, it is essential we have faith in Christ as the one who died for the forgiveness of our sins. Paul again: “I have been crucified with Christ; it is no longer I who live, but Christ lives in me; and the life which I now live in the flesh I live by faith in the Son of God, who loved me, and gave himself for me” (Galatians 2:20).

Time and again in his letters Paul returns to this theme of the ‘new life’. It was a fundamental part of his preaching—especially to Gentile converts who had come from a background of idol-worship with all the immorality that often involved. It was imperative he got the message across that they had to change their way of life.

This is how he puts it in his letter to the Corinthians: “Imitate me, just as I also imitate Christ” (1 Corinthians 11:1). He tried hard to achieve a Christlike mind, and he desired the same of all his fellow disciples. “For ‘who has known the mind of the Lord that he may instruct Him?’ But we have the mind of Christ” ( 1 Corinthians 2:16). To this end Paul gives much practical advice in his letters on how this ‘mind of Christ’ can be achieved. For example he urges the Colossians to set their hearts on the things of God and the things of His Kingdom which is to come:

If then you were raised with Christ, seek those things which are above, where Christ is, sitting at the right hand of God. Set your mind on things above, not on things on the earth. For you died, and your life is hidden with Christ in God. When Christ who is our life appears, then you also will appear with him in glory (Colossians 3:1–4).

What are ‘those things which are above’? Of course, they’re to be found in the Bible:

The Words of Christ

In what is sometimes called the ‘Sermon on the Mount’, which is recorded in Matthew chapters 5–7, Jesus told his disciples: “For I say to you, that unless your righteousness exceeds the righteousness of the scribes and Pharisees, you will by no means enter the kingdom of heaven” (Matthew 5:20). This must have been a bewildering comment because the scribes and Pharisees, the religious leaders of the day, were thought to be the epitome of righteousness. Christ dismissed them as “whitewashed tombs which indeed appear beautiful outwardly, but inside are full of dead men’s bones and all uncleanness” (Matthew 23:27). In other words, they put on a good outward show of piety and righteousness but it was only skin deep: “Even so you also outwardly appear righteous to men, but inside you are full of hypocrisy and lawlessness” (v. 28).

Disciples of Christ must not be like this. Their aim in life is to be like him both inwardly and outwardly. This is a challenge to all of us, because as Paul said, “all have sinned and fall short of  the glory of God”

Despite their weakness and their inherent tendency to sin, God offers the means of forgiveness and redemption through the saving work of His Son the Lord Jesus Christ. His followers can look to the mercy and the grace of God, their heavenly Father, “being justified freely by His grace through the redemption that is in Christ Jesus

For this they praise God and are deeply thankful. Even when they fail, they can pick themselves up and ask for forgiveness, and they are cleansed by the precious blood of Christ which he shed for them. Then they go on renewed and refreshed as they journey towards God’s Kingdom, seeking always to be more faithful and more Christlike, as he would have them be.