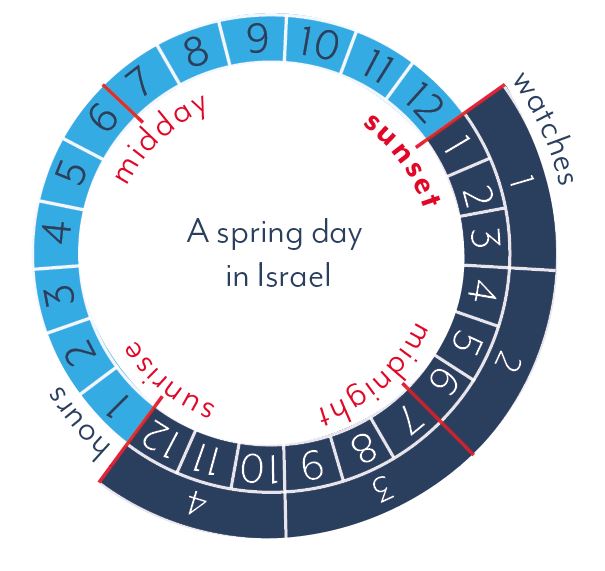 THE SYSTEM of dividing the day into 24 hours is ancient. It would have been in use when Abraham lived in Ur (Genesis 11:27–32), and when the Israelites lived in Egypt (Exodus 1). The one clock that’s mentioned in the Bible is the sun-dial in Jerusalem in the time of King Hezekiah (2 Kings 20:11), and it’s likely it would have used this system of counting the hours.

However the Israelites in the Old Testament, in common with people generally at the time, appear to have had a relaxed approach to timekeeping. References to the time of day are generally not more specifc than to morning, noon, evening, night, early and late.

When we come to the New Testament it’s the First Century ad and Israel is part of the Roman Empire. Timekeeping was important to the Romans, and as we’d expect in the Gospels and Acts there are many references to the time of day.

The Jewish day began at sunset. There were 12 hours of the night which finished at dawn, then 12 hours of the day. This meant of course that the hour was not a fixed time period, its length varied throughout the year—in the summer, hours of the day were longer than hours of the night, and in the winter it was the other way round. This may seem odd to us, but it’s actually a very ‘user-friendly’ system: the first hour of the day always begins at dawn, whatever the time of year; the third hour is mid-morning; the sixth hour is always noon; the ninth hour is mid afternoon; the eleventh hour is the last hour of the day, just before sunset (which is why the ‘eleventh hour’ is used proverbially as the latest possible time before it’s too late).

The night was also divided into ‘watches’, which originated with the military. Originally the Jews had three watches: the beginning watch (Lamentations 2:19), the middle watch (Judges 7:19), and the morning watch (1 Samuel 11:11). The Romans had four watches, and it seems to be the Roman system which is used in the Gospels. When Jesus says “Watch therefore, for you do not know when the master of the house is coming—in the evening, at midnight, at the crowing of the cock, or in the morning” (Mark 13:35), it’s suggested that these were the names of the four night watches.