Who Wrote Acts and When? 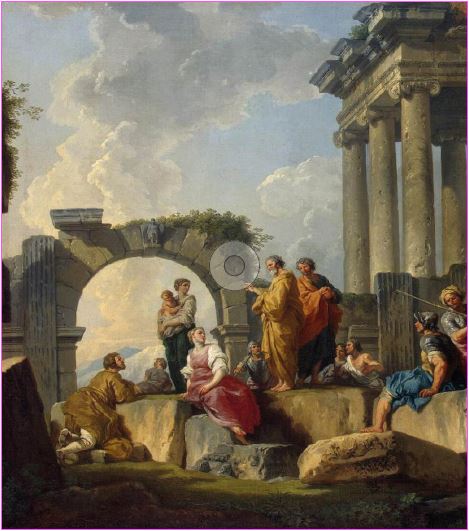 This is the second in a series in which we examine this fascinating Bible book. You can catch up with the first article at www.gladtidingsmagazine.org.

THE ACTS of the Apostles gives us a picture of the spread of Christianity from the ascension of Jesus to heaven, 40 days after he was raised from the dead, to the preaching activities of the Apostle Paul in Rome some 30 years later.

This was the First Century ad.  The Roman Republic had recently become an empire, and it was the dominant power in Europe, North Africa and the Near East. The Roman Empire enabled long distance travel, either along roads kept free from brigands by the power of Rome, or by sea.

Acts in its Context

The book of Acts reflects the world of the First Century, before the fire of Rome and before the war between Rome and Jewish insurgents which reached its climax in the destruction of Jerusalem in 70ad.

There are Jewish sympathisers such as Cornelius in the Roman army (Acts 10), and when Paul is accused of teaching an illegal religion (Acts 18:12–13) the governor shows the behaviour of an upper class Roman of the time and refuses to judge the case. Both of these would have been unthinkable after the Fire of Rome, when Nero declared Christianity to be an illegal religion, or after the start of the Jewish War when Jews became an enemy of Rome and it would have been impossible to find a centurion with Jewish sympathies.

It has been noted that Acts contains a very accurate picture of the Roman world of its time. It refers to more than 50 towns and more than 20 provinces without making any errors. The descriptions of journeys match the geography of the areas travelled, and the timings of sea voyages fit what is known of currents and climatic conditions. Acts fits into the mid First Century in a way that would not be the case at any later time.

When Was Acts Written?

This means that Acts was published after Paul had been two years in Rome. We can work out when this happened by a careful analysis of the movements of Paul, comparing this with dates known from archaeology and ancient literature.

It seems that after the close of the book of Acts, Paul was released from captivity in Rome and undertook another journey in the Eastern Mediterranean. The letters to Timothy and Titus indicate that he had undergone experiences in this region which could not have happened during the period covered by Acts. To account for these, Paul must have been released before the start of the summer in 62ad.

The Writer of Acts

There is ample evidence that the writer of Acts is the same person who wrote the Gospel of Luke. The Greek style of Luke is very distinctive and the same style is evident in Acts. The evidence of the first three verses of Acts is also strong:

The former account I made, O Theophilus, of all that Jesus began both to do and teach, until the day in which he was taken up, after he through the Holy Spirit had given commandments to the apostles whom he had chosen, to whom he also presented himself alive after his suffering by many infallible proofs, being seen by them during forty days and speaking of the things pertaining to the kingdom of God (Acts 1:1–3).

This tells us that Acts is addressed to someone whom it calls ‘Theophilus’—this may be his real name or it may be a nickname. The Gospel of Luke is written to the same person (Luke 1:3).

The passage in Acts describes the Gospel of Luke very well, ending with the ascension of Jesus to heaven, which is also the first event in Acts.

Another line of evidence is the way the writer indicates that he was present on some occasions. When the writer is travelling with Paul he uses the word ‘we’ to describe what he and Paul did. For example:

Therefore, sailing from Troas, we ran a straight course… (Acts 16:11).

And when we had come to Jerusalem the brethren received us… (Acts 21:17).

Now when we came to Rome the centurion delivered the prisoners…  (Acts 28:16).

These passages tell us that the writer of Acts was with Paul when he arrived in Rome, and it seems that he stayed with him there for some time. We can now turn to Paul’s letters and see who was with him there.

Four of Paul’s letters were written from Rome. These are Ephesians, Philippians, Colossians and Philemon. The ends of these letters contain lists of people who were with Paul in Rome: Colossians chapter 4, for example, lists Aristarchus, Demas, Epaphras, Justus, Luke, Mark, Onesimus and Tychicus (vs. 7–12).

We can therefore put together a picture of who the companions of Paul were in Rome, and by eliminating these one at a time we can see who is left.

And Sopater of Berea accompanied him to Asia—also Aristarchus and Secundus of the Thessalonians, and Gaius of Derbe, and Timothy, and Tychicus and Trophimus of Asia. These men, going ahead, waited for us at Troas (Acts 20:4–5).

Because the writer of Acts mentions himself as being with these people he cannot be one of them. We can therefore eliminate all the named people in the list as being possible writers of Acts.

By looking at similar passages we can pare down the possible alternatives to Luke and Demas. Demas is a less likely candidate because he abandoned Paul and went back to his ordinary life:

For Demas has forsaken me, having loved this present world, and has departed for Thessalonica… (2 Timothy 4:10).

This would not necessarily discount  Demas from writing Acts, especially as 2 Timothy was written a couple of years after Acts was completed, but it makes Luke the more likely candidate.

Also Luke is the only person identified as the writer of Luke’s Gospel or of Acts by writers in the period immediately after the completion of the New Testament.

What We Can Learn from Acts

The Acts of the Apostles is the inspired account of the growth of the early church, and it abounds with invaluable lessons for the beliefs and practices of modern believers.

Besides this, Acts gives the basis of a history of the early Christian community from the resurrection of Jesus to 62ad. By looking at the letters of Paul to Timothy and Titus, the letter to the Hebrews and the letters of Peter, we can extend our understanding to cover the period up to about 65ad.

This is the period in which the apostles were active and in which the New Testament was being written. This means that we have a picture of what was going on in the Christian community at the time that the letters were being written; this helps us to understand those letters.

When we look at the Old Testament, it is sensible to study the books of the prophets in the context of the history of Israel. The books of Kings and Chronicles give us a context for prophetic books such as Amos and Isaiah. In the New Testament the context is provided by the book of Acts.