The Meaning of Conversion 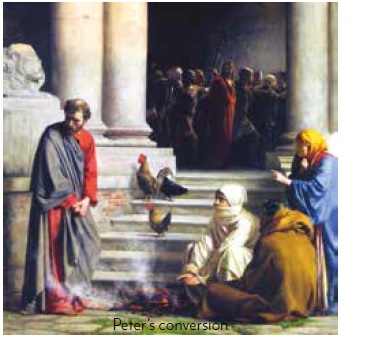 CONVERSION is a word that Christians often use. The root meaning of the word is ‘to turn around’. Conversion is about a change of direction.

Very often in the Bible the Christian life is described as a journey, following a certain course. We read of ‘walking in the spirit’; ‘running the race’; ‘finishing the course’; ‘pressing forward towards the goal’. Always going forward in a certain direction.

When Jesus was teaching he directed his hearers’ attention to the fact that there are two ways in which people can walk, two roads along which they can travel, two directions they can choose.

Let’s consider first the broad way. Its gate is so wide that it is easily entered without knowing that you have passed through. There’s no footpath—it’s a roomy, spacious thoroughfare on which you can travel however you like. All kinds of people walk along this road. On one side of it are the cheats and the brawlers, the self-indulgent and the greedy. On the other side are the upright religious people, whose outward lives seem to be above reproach and who thank God that they are not like other people (see Luke 18:9–14). They rejoice in their own respectability and have faith in their own goodness. You’d scarcely believe that it is the same road. Those on different sides would not appear to have anything in common with each other—save that they are going in the same direction. And in the centre—there the moderate people are to be found. Those who are decently self-satisfied. Those who are as good as their neighbours and are confident that they’re a lot better than some.

You will see that there are vast differences in the travellers. In one thing only perhaps are they all alike: they are all going in the same direction, some more slowly and some more rapidly, towards the same destination. Jesus called it destruction.

Fortunately it is possible to forsake the broad and easy road, with all its seeming comfort and safety, which leads to destruction and death. It is possible to turn about upon that road and make your way out of the wide gate, and to seek for the narrow gate that is the entrance to the difficult way which leads to life and God.

How wide is the narrow way of which Jesus spoke? It is as wide as he is himself, for he said “I am the way” (John 14:6). Was his life narrow? From one point of view it was—in the ungodly things of life Jesus had no interest. But in another way his life was supremely wide. He lived all his life in a large family and among friends and crowds. He was always accessible; he showed a genuine interest in the concerns of others; he spoke about money, about buildings, about sheep and goats, about vines and fig trees; about fishers and farmers and kings and tax collectors; about life and death, about sin and salvation, and about God. Jesus Christ is ‘the way’, and the way is as wide as him. It is wide enough to take every class and condition of people.

The rich did not find it easy to enter, but some did find it. Beggars were led to it. Thieves and harlots, Pharisees and tax collectors. Three thousand entered it in one day (Acts 2:41), amongst whom were some who had helped to crucify Christ. All these varieties of class and character found room to walk in it. We must not ever imagine that the way is too narrow for anyone.

Remember Jesus said that there are few who find the narrow gate. No one will find that gate by chance, you must look for it. “Seek, and you will find” (Luke 11:9).

A Change of Direction

Conversion may seem to be a very simple thing when you understand it, but it is a truth and an experience which can be easily overlooked and lost. Conversion is a turning about, a deliberate change in direction. It is not enough to have good intentions. It is not enough to know the Gospel, to lead a moral life. God must be your Saviour.

If the certainty of truth depended upon the proof of miracles and prophecy, or the discoveries of science, then truth would be in the reach chiefly of those who can analyse evidence, investigate history, learn languages and study by experiment. But in the Bible we learn this: “The humble He guides in justice, and the humble He teaches His way” (Psalm 25:9). “For thus says the High and Lofty One Who inhabits eternity, whose name is Holy: ‘I dwell in the high and holy place, with him who has a contrite and humble spirit’” (Isaiah 57:15).

Conversion is not only knowing about God and His salvation, but believing it. For the day will come when life gets hard; when the soul is as it were unfixed from its mooring and drifting aimlessly over the waste of uncertainty. The person whose faith rests only on head knowledge will find their conversion crack and they will be left alone on a narrow road and they will realise they’re not sure where it leads. Knowledge is in the head but faith is in the heart. Both are essential to conversion, but especially faith.

Once when Jesus was preaching he called a little child to him, “set him in the midst of them, and said, ‘Assuredly, I say to you, unless you are converted and become as little children, you will by no means enter the kingdom of heaven. Therefore whoever humbles himself as this little child is the greatest in the kingdom of heaven’” (Matthew 18:2–4). The humility which embodies the trust of a child, is the spirit of conversion.

At the end of his ministry Jesus foretold that he would die and his disciples would desert him. “And the Lord said, ‘Simon, Simon! Indeed, Satan has asked for you, that he may sift you as wheat. But I have prayed for you, that your faith should not fail; and when you have returned to me, strengthen your brethren’” (Luke 22:31–32). Simon Peter insisted that he would never deny his master. But so it happened: Jesus was arrested and stood trial, Peter looked on helpless and his courage failed him. Later in the same chapter (verses 54–62) we see how three times that night Peter denied that he knew Jesus.

Then he remembered Jesus’ words, and “went out and wept bitterly”. That was his conversion: previously he had insisted on his strength and loyalty, now he realized his weakness and was ready to be the leader his brothers needed.

Some time afterwards Peter healed a lame man in the Temple, and told the startled crowd that this miracle had been done through faith in the name of Jesus. And he said, “Repent therefore and be converted, that your sins may be blotted out, so that times of refreshing may come from the presence of the Lord” (Acts 3:19). ‘Repent’ means ‘turn again’: repent and be converted, turn again and turn around!

Conversion is what happens when you have come to know and understand the truth with regard to God and His purpose. It is a recognition that Jesus Christ is Lord; a surrender to God’s will; a yielding to his teaching in all things. Christ is the King reigning in the heart of the converted.

You may have heard that conversion is all about feelings—that is not true. Experiences are not important, facts are important. Experiences vary with temperament, education and circumstances. With some, conversion is sudden and with all the upheaval of an earthquake; with others it is gradual and gentle.

Saul the enemy of the Christians was struck down on the road and was blind for days (Acts 9).The Roman jailor in Philippi was converted amid the convulsions of an earthquake (Acts 16); but in that same chapter we see the conversion of Lydia the businesswoman, whose heart was opened gently by the Lord.

I could give my own testimony. It took me a long time to render full obedience to the Gospel, but I can well remember when I was converted—it happened between Saturday lunchtime and Sunday night, over the space of a weekend.

These are the accidents of conversion. The one fact common to them all is the change that conversion makes. Your eyes are opened. You see God all around you. There is a sense in which the earth, in spite of all its evil, for you becomes filled with the glory of the Lord. You realize that more than anything else in the world you want to be a child of God, to be a brother or sister of Jesus Christ, to be part of their family, and your absolute priority in life is to be baptized.

Everyone is either in Christ or out of Christ; a child of God or not. No one is too bad to pass through the narrow gate, and no one can follow Christ unless they do so. The Gospel of salvation is for all. And Christ is able to save anyone, but he cannot compel. We must come to him.

All that the Father gives me will come to me, and the one who comes to me I will by no means cast out (John 6:37).