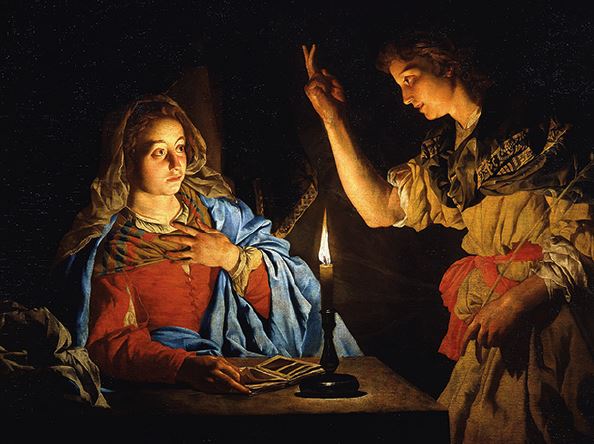 THE DESTINY OF Jesus Christ was made clear to his mother Mary before he was born. The angel Gabriel appeared to her with a startling message:

“Do not be afraid, Mary, for you have found favour with God. And behold, you will conceive in your womb and bring forth a Son, and shall call his name Jesus. He will be great, and will be called the Son of the Highest; and the Lord God will give him the throne of his father David. And he will reign over the house of Jacob forever, and of his kingdom there will be no end (Luke 1:30–33).

King David was Mary’s ancestor, who reigned over Israel a thousand years previously. God had made promises to David which are recorded in 1 Chronicles 17 and 2 Samuel 7, and centred on a special descendant:

“When your days are fulfilled and you rest with your fathers, I will set up your seed after you, who will come from your body, and I will establish his kingdom”

The ‘house of Jacob’ which Gabriel mentioned is another name for the nation of Israel—Jacob was the ancestor of the nation, whose name God changed to Israel (Genesis 32:28). So Jesus was born to be King in Israel, reigning from Jerusalem.

The angel Gabriel also appeared to the priest Zacharias, who was married to Mary’s cousin Elizabeth, to tell him that they too would have a son (Luke 1:13). Their son was John the Baptist, who was to be the forerunner of Mary’s son Jesus Christ. When John was born Zacharias broke into a song of praise to God:

Blessed is the Lord God of Israel, for He has visited and redeemed His people, and has raised up a horn of salvation for us in the house of His servant David, as He spoke by the mouth of His holy prophets, who have been since the world began (Luke 1:67–70).

These words of God which Zacharias spoke affirm the continuity of God’s purpose—the promises made to David will be fulfilled in his descendant, and they are centred on the house of Israel.

Jesus came to the house of Israel to show them what God wanted them to do, but for the most part they did not believe and they rejected him. John the Baptist had warned them of the consequences:

Then he said to the multitudes that came out to be baptized by him, “Brood of vipers! Who warned you to flee from the wrath to come? Therefore bear fruits worthy of repentance, and do not begin to say to yourselves, ‘We have Abraham as our father.’ For I say to you that God is able to raise up children to Abraham from these stones’ (Luke 3:7–8).

Abraham was the grandfather of Jacob, he was the ancestor of Israel (and the Arabs). John warned them not to trust in their ancestry, that was not enough.

Rejected By His People

Sadly, most of his own people were disobedient and did not accept Jesus as their saviour. Their rulers had him put to death. To this day most Jews still do not accept that Jesus is their Messiah. But they are still God’s people. The Apostle Paul demonstrates how their failure was instrumental in opening up the promises which once applied to them only, so that now everyone can benefit:

I say then, have they stumbled that they should fall? Certainly not! But through their fall, to provoke them to jealousy, salvation has come to the Gentiles (Romans 11:11).

Christians have not replaced the Jews in God’s purpose. Paul goes on to paint a picture of the nation of Israel as an olive tree. The worthless branches (unfaithful Jews) were broken off, and branches from a wild olive tree (faithful Gentiles) grafted on to the tree (verses 17–24). He continues:

For I do not desire, brethren, that you should be ignorant of this mystery, lest you should be wise in your own opinion, that blindness in part has happened to Israel until the fullness of the Gentiles has come in. And so all Israel will be saved, as it is written: “The Deliverer will come out of Zion, and he will turn away ungodliness from Jacob; for this is My covenant with them, when I take away their sins.” (Romans 11:11, 25–27).

When Jesus returns many Jews will repent and believe in him (Zechariah 12:9–10). He will establish the Kingdom of God with its capital in Jerusalem, and reign over the world at peace (Isaiah 2:1–4). It will be a time of blessing for the whole earth and all its peoples.

This was all foreseen by the old man Simeon, who came across the baby Jesus in the Temple in Jerusalem and praised God:

For my eyes have seen Your salvation which You have prepared before the face of all peoples, a light to bring revelation to the Gentiles, and the glory of Your people Israel (Luke 2:30–32).