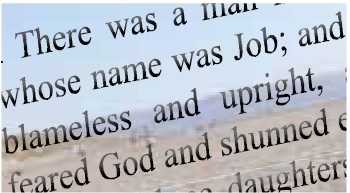 JOB (pronounced ‘Jobe’) is thought to have lived around the time of the book of Genesis. The theme of the book is the age-old ‘problem of suffering’. God allowed intense suffering to afflict Job—a ‘good’ man who was well respected by all. But Job’s friends,Eliphaz, Bildad and Zopharwrongly assumed that his sufferings were punishments for hidden sins. “Miserable comforters are you all” (16:2) is Job’s assessment of his friends!

A fourth ‘friend’, the younger man Elihu, is introduced in chapter 32. He was angry with Job “because he justified himself rather than God” and with the three friends “because they had found no answer, and yet had condemned Job”.

Many times Job says how he would like to argue, reason or plead with God about his situation. He wishes there was a mediator “who may lay his hand on us both” (9:33).

But finally, in chapters 38–41, we read God’s answer to the matter. He reminds Job of his true position before God the Creator. Job is brought to realise that God is right and should be trusted. Job confesses his own unworthiness (even though people had looked upon him as good). His sufferings have helped him to see this point, and he is eventually richly blessed (Job 42:10). If suffering brings us to a position of humility before God, it will prove to be a blessing in disguise (see Isaiah 66:2).

The story of Job refers to a “satan” (a word meaning ‘adversary’). The Bible never speaks of a supernatural devil. Job’s “satan” was probably the human thinking which did not believe that Job’s faith could stand up to severe testing—see Job 2:6 and 42:11. It is significant that the second of these verses refers to “all the adversity that the Lord had brought upon him”.

God, in the end, restores the fortunes of Job and requires the three friends to offer sacrifices, “for you have not spoken of me what is right, as my servant Job has” (42:7).