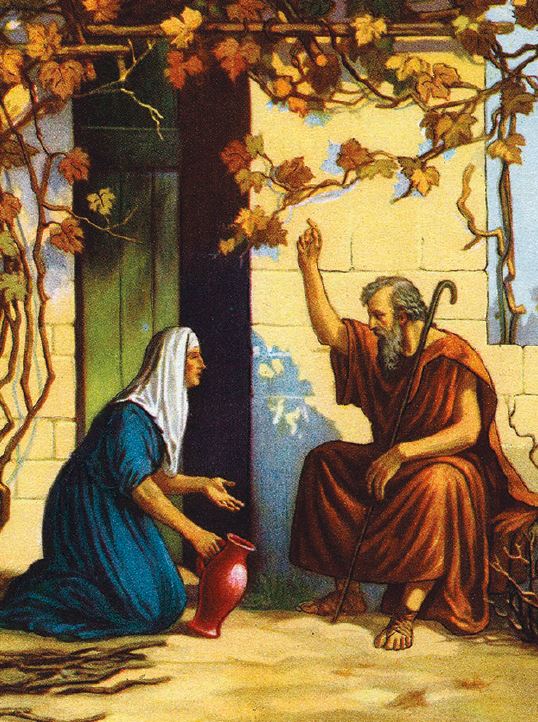 ONE OF THE CHALLENGES of having faith in God is to believe that He will provide for us in whatever circumstances we find ourselves. The Lord Jesus Christ said this:

The clear message of Jesus to his disciples is that God will provide. This is so simple to understand, but it doesn’t always work out quite as we might expect. That’s why the Bible is so helpful by giving us examples of people for whom God did provide, people like the prophet Elijah.

The spiritual health of the nation of Israel had deteriorated with the reigns of a succession of godless kings, culminating with King Ahab of whom it was written that he “did evil in the sight of the Lord, more than all who were before him” (1 Kings 16:30). At the climax of his wickedness the prophet Elijah arrived with this announcement:

As the Lord God of Israel lives, before whom I stand, there shall not be dew nor rain these years, except at my word (1 Kings 17:1).

The withholding of rain from the nation was what God had said would happen if they did not listen to His voice (Deuteronomy 28:23-24). Although this was a punishment which affected the whole nation, God in His mercy provided for those who were obedient to His voice and were seeking His kingdom.

After Elijah’s confrontation with Ahab, God told him: “Get away from here and turn eastward, and hide by the Brook Cherith, which flows into the Jordan. And it will be that you shall drink from the brook, and I have commanded the ravens to feed you there”

The raven was an unclean bird under the Law of Moses (Leviticus 11:15), yet it was the means that God chose to deliver food to Elijah, until the brook dried up. When this happened God comforted Elijah by informing him that He would still provide for him, but this time in a different way.

The Widow of Zarephath

King Ahab was searching high and low for the prophet, so God sent him out of Israel into neighbouring Sidon where he would be safe. But Sidon was still an area affected by the drought. What comfortable lodgings did God have in mind for His prophet? Of all people, he sent him to a widow who was in dire circumstances herself, having just a handful of flour in a bowl and a little oil. She was about to bake a cake for herself and her son, “that we may eat it, and die”

This was the place that God had arranged for His prophet to stay and, in so doing, God saved not only Elijah but also the widow and her son. For this is what Elijah told the widow:

Do not fear; go and do as you have said, but make me a small cake from it first, and bring it to me; and afterward make some for yourself and your son. For thus says the Lord God of Israel: ‘The bin of flour shall not be used up, nor shall the jar of oil run dry, until the day the Lord sends rain on the earth’ (vs. 13–14).

First there were ravens and now there was a starving widow! God evidently chooses to provide for His children in unusual ways sometimes; but the message is clear—God will provide. And when the widow responded in faith, she too was provided for. The bowl of flour never was exhausted nor the jar of oil empty, thanks to God’s gracious provision.

The widow was a Sidonian, not an Israelite. But there were faithful people in Israel too. One of them was Obadiah, a high ranking official in King Ahab’s own household. This was the very last place where you would expect to find a man who trusted God and put his life on the line as a consequence, because Ahab’s wife Jezebel was a ruthless persecutor of God’s people. It was Obadiah who “hid one hundred men of the Lord’s prophets, fifty to a cave, and fed them with bread and water” (1 Kings 18:13). He was a further example of how God provided through unusual and unexpected ways.

These examples in the lifetime of Elijah demonstrate that God has provided for His people in the past—even in the midst of severe drought and persecution. When appropriate He can provide through unusual ways, sometimes in ways which are unexpected. He has said that He will provide; all that He asks is that we seek first the Kingdom of God.