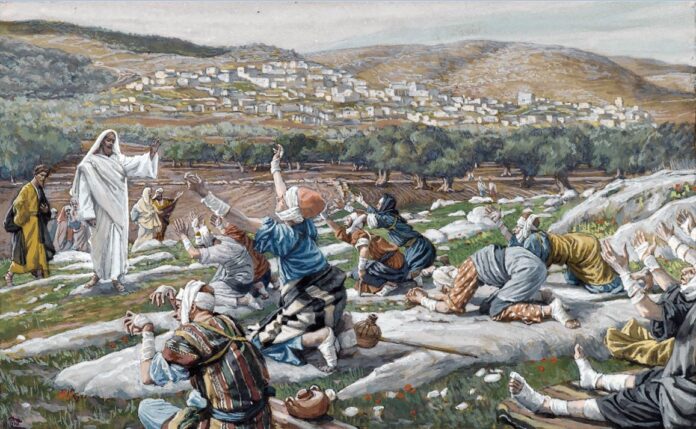 NO ONE CAN DOUBT that the Covid pandemic has been both disruptive and destructive. Its toll in terms of suffering and death and also its financial cost may never be truly known. It has brought home to us how vulnerable we are in the face of disease.

About 2000 years ago there lived a man who could deal with any disease he came across, and be unfazed by it—and deal with it compassionately. That man was Jesus Christ. In the Bible we have the opportunity of observing him at work, particularly with people suffering from one particular disease. This disease was leprosy, and it was the scourge of the age. It made sufferers into outcasts. If you had leprosy, you had to permanently self-isolate.

I’d like to think about ten individuals who came seeking help one day. The account is in Luke 17:11–19. The men were probably all Jews except for one, who was a Samaritan.

(Samaritans were the Jews’ neighbours, who were related but did not follow the Jewish faith and so were generally despised by the Jews.) These ten men stood afar off from Jesus, maintaining a respectful distance, and called out for help.

Generally the Jews would not have anything to do with foreigners, especially Samaritans; but here there is a fellowship of need. They all need desperately to be healed, and they come together to appeal for help: ‘Jesus, Master, have mercy on us’ (v. 13).

On other occasions Jesus did not hesitate to touch people who were unclean. He was not afraid of contamination—he had the power of God. Interestingly on this occasion he did not actually touch them, but he simply told them to go and show themselves to the priests. They were miraculously healed as they went on their way! One of the lepers, the Samaritan, returned to give thanks to Jesus. Jesus commended him: ‘Rise and go your way; your faith has made you well’ (v. 19).

What has faith to do with it?

The Disease of Sin

First, a bit more about leprosy. It is a bacterial infection which attacks the nerves under the skin. As the nerves die the skin and body are damaged, because the sufferer is unaware when they contract infections or accidentally hurt themselves. In Bible times lepers were outcasts from society who lived on their own or in isolated colonies. It was seen as a kind of living death. In Jewish society whenever a leper came close to other human company they were required to shout “Unclean! Unclean!”

The Bible speaks of other diseases being healed, but leprosy is the only disease which it describes as being ‘cleansed’ (for example Leviticus 14:4). The Bible uses leprosy as a picture, to help us understand the condition we are in as sinners. We are ‘afar off’ from God. For example the Apostle Paul paints the picture in his letter to the Ephesians. Before coming to Christ ‘you were dead in the trespasses and sins’ (Ephesians 2:1); and those who have not come to Christ ‘are darkened in their understanding, alienated from the life of God because of the ignorance that is in them, due to their hardness of heart. They have become callous’ (4:18–19).

Sin is so highly infectious that we all have it; it is under our skin and in our blood; it makes us insensitive to God reaching out to us; it makes us unclean and separates us from Him. It is a living death. In Bible times leprosy was incurable by medicine— but Jesus Christ, alone, had the power and authority to cure it. Similarly there is no cure for sin, except by Jesus Christ.

Leviticus 14 describes the process under the Law of Moses for cleansing a person who had been cured of leprosy. The priest had no power to cure the disease, but it was his job to examine the person and certify that the disease had gone, and then perform the ritual of cleansing which would enable the leper to rejoin society. Notice with these ten men who came to Jesus, it was as they went to find the priests that they were cleansed. It was at this point that the Samaritan turned around and came back to Jesus, glorifying God and falling on his face before Jesus in thankfulness.

Let’s think through this miracle again, and remind ourselves of the question: what did faith have to do with it? There is in Luke 17 a clear process by which the leprosy came to be cleansed and healed:

All ten men exhibited a certain degree of faith in that they knew to whom they should appeal. They recognised that there was no other source of healing than the Lord Jesus. He directed them to go to the priests. But only one, the Samaritan, turned back to Jesus, recognising that he and not the priests was the source of the cure.

Then one of them, when he saw that he was healed, turned back, praising God with a loud voice; and he fell on his face at Jesus’ feet, giving him thanks. Now he was a Samaritan. Then Jesus answered, “Were not ten cleansed? Where are the nine? Was no one found to return and give praise to God except this foreigner?” And he said to him, “Rise and go your way; your faith has made you well” (vs. 17:15–19).

It was only for this one man that the event became an act of faith which would transform his life. Only he acknowledged the reality that having received the answer to his prayer, he should give God thanks through the Lord Jesus Christ, because ultimately all healing is from heaven. It is the only place which can offer a solution to all illness, the only source of salvation, and the only genuine source of continuing care.

Isn’t this where we all are in life? We are all suffering from a disease for which we do not have a cure—the Bible calls it sin and it leads inevitably to death (James 1:15). It is a terminal illness. Without help we are doomed. However God has provided a way of salvation. He sent Jesus who did two things:

Jesus was treated most cruelly and then died on the cross to show that there is nothing in human nature which cannot be conquered. This was proved by his resurrection, coming back to life again, healed, alive for evermore (Acts 2:24). He is now in heaven and continues to provide loving care to all those who believe and trust in him (Hebrews 4:14–15). No matter what afflicts them in this life, they can be confident of eternal health in the Kingdom of God.

No more sin, pain, sorrow, suffering, mental torment or disease of any sort— death ended for ever. Just think, you could be there—if you believe, turn to God and are baptised, and follow Christ in your life (Mark 16:16). If you have faith.

He will wipe away every tear from their eyes, and death shall be no more, neither shall there be mourning, nor crying, nor pain any more, for the former things have passed away (Revelation 21:4).