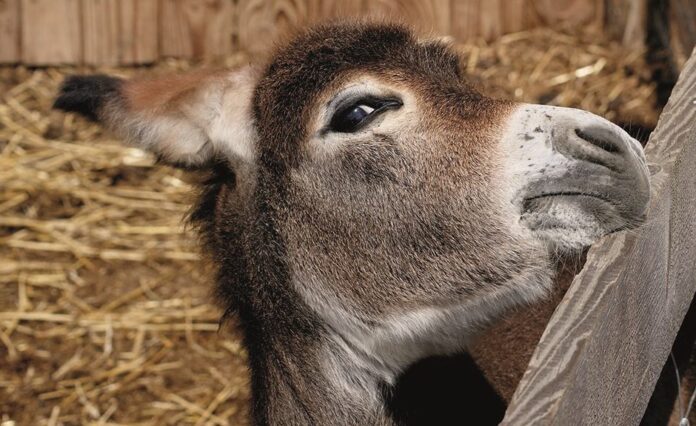 THE PEOPLE of Israel were nearly at the end of their journey. After forty years as nomads, they had swung north-east at last, up on to the east side of the Dead Sea, leaving the desert behind. The high plateau they entered was rich cattle country. It was ruled by Sihon king of the Amorites and Og king of Bashan. Both fell swiftly before the onslaught of the Israelites. Now only the River Jordan stood between them and Canaan the home of their ancestors, the land God had promised to Abraham, Isaac and Jacob. Encamped in Shittim, they felt confident and expectant. But they were about to face a subtle enemy, before whom they were going to collapse in shame and disgrace.

Actually, it was all quite unnecessary. The people of Moab and their neighbours the Ammonites were Israel’s relatives, descended from the family of Abraham. For this reason, the Israelites had no intention of waging war upon them. But Balak King of Moab heard of their victories further north, jumped to conclusions, and decided his state was in peril. At a council of war, he made up his mind to call in a powerful soothsayer to curse the armed hordes of Israel. Hastily, messengers were despatched north to the Euphrates to secure the services of Balaam the prophet.

‘Behold,’ ran Balak’s letter, ‘a people has come out of Egypt. They cover the face of the earth, and they are dwelling opposite me. Come now, curse this people for me, since they are too mighty for me. Perhaps I shall be able to defeat them and drive them from the land, for I know that he whom you bless is blessed, and he whom you curse is cursed’ (Numbers 22:5–6).

We do not know Balaam’s background. He must have been widely known and respected to be summoned from such a distant land. He served the God of Abraham, for he acted as a prophet in God’s name, yet he was also a wily, greedy and deceitful man, who by his actions denied the God he claimed to honour. The story which follows is full of interest and some instruction.

When Balaam asked God for permission to go to Moab, he was refused. ‘You shall not go with them. You shall not curse the people,’ God said, ‘for they are blessed’ (Numbers 22:12).

The messengers reported back to Balak. Balak decided more money might help. He sent out another embassy of honourable princes, who presented a glowing picture of the reward Balaam would be given if he accepted Balak’s call for help. Tempted, the prophet asked them to give him till morning, so that he could see if God had changed His mind. In the night, the voice of God came: ‘If the men have come to call you, rise, go with them; but only do what I tell you’ (v. 20). Balaam did not wait to see if the messengers came to call him. First thing in the morning he saddled his donkey and set off. His eyes bulged at the thought of the magnificent sum he would bring home.

Confronted by an Angel

He had not gone far down the road when, to his annoyance, his donkey spontaneously turned out of the road into a field. He walloped her thoroughly and turned her head back in the right direction. After a while, the road narrowed as it passed between two vineyard walls. The donkey veered sideways and crushed Balaam’s foot against the stonework. This earned her another beating. Finally, the poor creature just sat down beneath him and refused to go any further. Balaam was furious and once again began to pummel her with his staff.

To his amazement the donkey began to speak! Reproaching him for being so cruel, she respectfully pointed out that she had served him faithfully for years and had never had to behave like this before.

All at once he noticed standing in front of him an angel of God, with a sword drawn in his hand. Instantly he realised why his donkey had misbehaved. Three times she had evaded the angel and saved Balaam’s life. Three times the angel of God had been nudging the conscience of Balaam, and three times his greed had blinded him to his duty.

We can all make Balaam’s mistake. God makes His will known to us in the Bible very clearly, as He did to Balaam. But often we are determined to please ourselves. We are so possessed by our desires that we close our ears and eyes to God, and blunder on. The Apostle Peter denounced those who behaved like this in the First Century church. Aspiring to be leaders, they would compromise their principles. Instead of teaching the truth, which is often uncomfortable, they would preach smooth words to their congregations, for the sake of popularity and profit. ‘They have followed the way of Balaam,’ wrote the forthright apostle, ‘who loved gain from wrongdoing, but was rebuked for his own transgression; a speechless donkey spoke with human voice and restrained the prophet’s madness’ (2 Peter 2:15–16).

Notice the part played by the angel of God. Three times, unseen, he tried through adverse circumstances to jog the prophet back to his senses. In the end drastic action was necessary to open his eyes. We have an indication, one of many in the Bible, of how the angels serve God’s people. Their work is a neglected but fascinating Bible topic.

One thing is clear: in the words of the letter to the Hebrews, they are ’ministering spirits sent out to serve for the sake of those who are to inherit salvation’ (Hebrews 1:14). Jesus speaks of every one of his disciples having an angel, one who watches over them from God’s presence (Matthew 18.10). David the Psalmist rejoiced in the way ‘the angel of the Lord encamps round those who fear him, and delivers them’ (Psalm 34:7). It is thrilling and awe-inspiring to realise that if we become followers of God, He will appoint a heavenly messenger to look after us. Unseen, like Balaam’s, our angel will direct our way through life, encouraging us, protecting us, but warning us when we are going wrong—provided, of course, we are sensitive enough to respond. Unfortunately Balaam was headstrong and covetous, and he pressed on, hoping to find some way to circumvent the will of God.

From Curses to Blessings

When Balaam arrived at Balak’s palace, he was given a great reception. The king himself came out to meet him, and many animals were sacrificed to set the scene for Balaam’s awesome curse of Israel. When the time came, Balak and Balaam ascended a hill topped with seven altars and offered seven bulls and seven rams, and Balaam walked on to listen for the word of God. When he returned, Balak and his princes waited expectantly. But instead of a curse, out came a blessing! ‘From the top of the crags I see him,’ intoned Balaam, ‘from the hills I behold him; behold, a people dwelling alone, and not counting itself among the nations! Who can count the dust of Jacob or number the fourth part of Israel? Let me die the death of the upright, and let my end be like his!’ (Numbers 23:9–10). Balak was horrified. ‘I took you to curse my enemies, and behold, you have done nothing but bless them,’ he protested.

He decided to take Balaam to a different vantage point and try again. This time the blessing was longer and even more pointed (vs. 13–24). Balak was losing patience, and Balaam could see the reward slipping through his fingers.

So they tried a third time. When Balaam saw that God was making him bless Israel, he decided to give up using his usual enchantments, but to stand where he could see Israel’s camp spread out in the wilderness below him (Numbers 24.1).

It was no good. The Spirit of God swept over him, and like a puppet he rolled off a magnificent blessing of God’s people. He sounded out a prophecy that would run on through the centuries. He spoke of the coming of Jesus: ‘a star shall come out of Jacob, and a sceptre shall rise out of Israel… one from Jacob shall exercise dominion and destroy the survivors of cities!’ (Numbers 24:17, 19). So Balak went home disappointed, and God saw to it that instead of His purpose being thwarted, His power and His promises became headline news all through the country of Moab.

Balak’s mistake has been repeated many times. Men like Haman (Esther 3:6) and Herod (Matthew 2:16) and Adolf Hitler have also tried to stop God’s promise to Israel coming true. Yet somehow, battered and bruised by history, the Jews survive. As God swore through the prophet Jeremiah, only if the sun, moon and stars fall from the sky, ‘then shall the offspring of Israel cease from being a nation before me for ever’ (Jeremiah 31:36). The heavenly bodies have not fallen, and the descendants of Israel are still here.

A Sting in the Tail

We have not quite finished the story of Balaam. He was a perceptive observer of human nature, and determined not to lose his handsome reward. He had wanted to curse Israel but God would not let him, so his idea was to turn God against them. And he knew just how to do it.

One morning, a party of glamorous Moabite girls sauntered out to the camp of the Israelites. After forty years in the wilderness the Israelite men fell easy prey to their sophisticated beauty. They followed them back into their cities and homes. The movement spread like a disease through the camp. Soon whole bands of men were trooping out of the camp gate, and some were even bringing their conquests back to their tents.

Worse still, once mixed up with the Moabites,  the  demoralised  Israelites, trained to love the God of heaven and His laws, began to attend the worship of Moab’s vile and sensual god Baal. ‘These invited the people to the sacrifices of their gods, and the people ate and bowed down to their gods. So Israel yoked himself to Baal of Peor’ (Numbers 25:2–3).

It is not until the end of the New Testament that we learn this was all Balaam’s idea. It was ‘Balaam’, says the Apostle John, ‘who taught Balak to put a stumbling block before the sons of Israel, so that they might eat food sacrificed to idols and practise sexual immorality’ (Revelation 2:14). Balaam knew this apostacy would bring disaster upon Israel, and it did. A plague ran like fire through the camp and 24,000 people died in the plains of Moab (Numbers 25:9).

But it was not the end of Israel, of course. Those who survived the plague were never allowed to forget the dreadful lapse of Baal Peor. It was a stain on the nation’s history. Yet God could forgive. He persisted with His rebellious people, now wiser and somewhat chastened.

Their fall is a lesson to all who come after. Sensual attraction arouses the strongest passions, and can sap the resolve to keep pure the holy commandments of God. ‘Flee from sexual immorality,’ wrote the Apostle Paul (1 Corinthians 6:18). Especially in the permissive Western world, the lures of the flesh are paraded constantly. But the Bible issues a stark warning. ‘Do not be deceived: neither the sexually immoral, nor idolaters, nor adulterers, nor men who practise homosexuality, nor thieves, nor the greedy, nor drunkards, nor revilers, nor swindlers will inherit the kingdom of God’ (1 Corinthians 6:9–10).

This episode ends with a punitive military expedition, sent off by Moses. It returned with the news that Balaam the son of Beor was dead (Numbers 31.8).