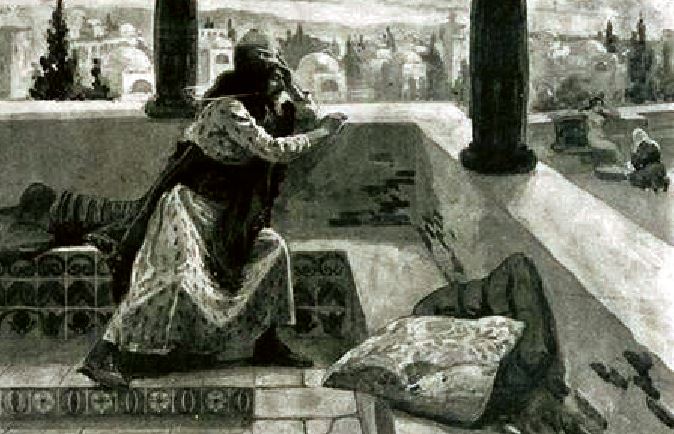 The Gospels of Matthew and Luke give lists of the ancestors of Jesus Christ. Only five women are mentioned. These were all very special individuals. In this series we’re looking at them in turn—this month we consider Bathsheba.

WE HEAR NOTHING about Bathsheba until late one night when she was washing (2 Samuel 11:2).

This is a most unusual Bible story, but one which can teach us very useful lessons. King David had fought many battles during his life, but on this occasion he sent Joab his captain to conquer the Ammonite capital city Rabbah, while he stayed at home. In modern language we can say he was ‘bored’, and one night he couldn’t sleep and so went for a walk on the flat roof of his palace. He saw a woman in another courtyard or on a flat roof washing herself. He obviously had a second look and noticed that she was beautiful. He was clearly attracted, and sent a messenger to find out who she was, and the answer came back, “Bathsheba, the daughter of Eliam, the wife of Uriah the Hittite” (v. 3).

God has given humans free will, which means that we can choose either good or evil. James wrote, “Blessed is the man who endures temptation; for when he has been approved, he will receive the crown of life which the Lord has promised to those who love Him” (James 1:12).

David should have realised that any liaison with Uriah’s wife was totally wrong, but sadly he still went ahead. He sent for her to come to his palace, and slept with her. Some time later Bathsheba sent a message to the king to say that she was pregnant. We might well think that she should have refused the king’s overtures and not gone to the palace, but kings in those days were extremely powerful, and she probably thought that she could not refuse. Bathsheba was now in a most difficult situation, because her husband was away fighting with the army and so it would be obvious that he was not the child’s father.

David devised a plan of deceit, and sent a message to the army commanding Uriah to come home. He tried to persuade Uriah to go to his own house, so it could be thought that Bathsheba’s baby was her husband’s. He tried this for two days, and then did an extremely wrong thing. He wrote to Joab the captain of the army to assign Uriah to a dangerous place in the battle where he would surely be killed. This wicked scheme worked, leaving Bathsheba as a widow, but expecting the king’s child.

Now David was guilty of both adultery and murder. God severely punished him, but did not allow him to be put to death. David did not forget Bathsheba, and when her mourning for Uriah was over he sent for her again, and she became his wife. When  he was born their baby boy remained very sick, and he died seven days later.

But Joab, the captain of David’s army, was not a kind-hearted man, and when Uriah had been killed he did a very cruel thing. He sent a message to King David saying that he had conquered part of the city of Rabbah, and telling David to come to fight against it and complete the capture. This meant that David not only had to be absent from his new wife Bathsheba, but he had to see where Uriah had been killed.

King David had a number of wives and many children. His marriage to Bathsheba was a shameful episode in both their lives. She made a bad mistake. And yet it is Bathsheba who became the mother of David’s two most important sons—Solomon, who succeeded him on the throne and through whom the royal line descended which led to Jesus’ step-father Joseph (which is the line we see in Matthew’s genealogy); and Nathan, from whom Jesus’ mother Mary was descended (whose line we see in Luke’s genealogy).

Bathsheba features in two later chapters of King David’s life. When Adonijah, another of his sons, tried to usurp the kingdom, Bathsheba was instrumental in ensuring that David’s intended heir Solomon was crowned king (1 Kings 1:28–35).

Later after David’s death Adonijah tried to take advantage of Bathsheba’s influence over her son Solomon to further his ambitions (1 Kings 2:13–25). But King Solomon considered this a step too far, and Adonijah was put to death.

In this very sad account of lust, adultery and murder Bathsheba seems to be only a pawn in King David’s machinations. But she shared the heartache while their baby was so ill, and his subsequent death.

Her son Solomon was evidently very special because we read “the Lord loved him” (2 Samuel 12:24). Perhaps this is testament to his mother’s good influence.