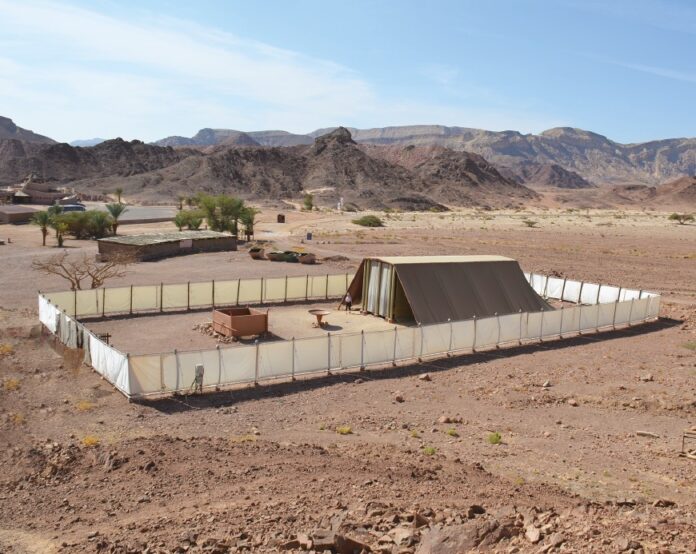 AFTER THE INCIDENT of the golden calf the people of Israel were deeply repentant. When Moses, their aged leader, toiled to the top of Mount Sinai to beg the Lord to forgive their great sin, He graciously agreed (Exodus 32:14). But He sent Moses down with a task for the people which would test their sincerity.

On an earlier occasion God had spoken to Moses about building for Him a mobile temple, to be called ‘the Tabernacle’. ‘Let them build me a sanctuary’, He had said, ‘that I may dwell in their midst’ (Exodus 25:8). He had described the building carefully and shown Moses a model which he was to follow. Now the time had come to put the plan into action. The whole construction was to be made from gifts of timber, cloth, and precious metals donated by the people, and it would be put together by volunteer labour.

Construction of the Tabernacle

When Moses informed the people, the response was overwhelming. They brought brooches, earrings, metal mirrors, bales of cloth, silver and bronze—so much that he had to post an order that the target had been exceeded, and no more was required. Then they set to work. Under the direction of two inspired craftsmen (Exodus 31:1–6), the women spun thread, then combined different colours to be woven into cloth and embroidered. Metal workers cast bronze and beat gold into articles of furniture. Carpenters built the giant wooden frames that formed the walls. When it was ready, it was an imposing sight. And it was made to last! We know that it was still standing over four centuries later in the time of King Solomon (2 Chronicles 1:5), for he brought parts of it into the great stone temple he built in Jerusalem. Yet the whole thing was designed to be completely portable, so that as the encampment moved on, the Tabernacle could go with them.

Let us make an imaginary tour of what must be one of the most remarkable buildings ever made.

The smallest details are listed in Exodus 36 to 40, so we need to have no doubts about its appearance. From a distance, all you could see was a three-metre (10-foot) high wall of white linen (1), enclosing an open court approximately 23 metres by 46 metres (25 by 50 yards). The measurements are given in cubits a cubit is the length of a man’s forearm.)

The only way to look inside the court was to pass through the entrance gate (2), a flap of embroidered cloth in the outer wall. In the centre of the court, in line with the gate, stood an altar plated with bronze (3). Close by was a huge bronze bowl (4) from which water was taken for washing hands and feet. Behind was the Tabernacle proper (5), an open fronted rectangle, walled with timber panels each 10 cubits high by 1.5 cubits wide. Each of the panels stood on end in a row, coupled firmly to the others with wooden bars. The roof of the building consisted of layers of cloth, topped with leather, stretched taut, and anchored securely to the ground with metal pegs.

Inside the Tabernacle were the most striking sights of all. The entry curtain (6) opened on to a room 20 cubits long and 10 cubits wide, containing three items of furniture. On the left stood a lampstand of pure gold (7), made to look like an almond tree, with seven lamps poised on the ends of seven branches. On the right was a gold-plated table (8), laid ready with a simple meal of bread and drink. A tiny golden altar, used only for incense, stood at the back (9). Behind, stretched from side to side, hung a great embroidered curtain or veil, of exquisite workmanship (10) . Beyond the veil lay yet another room, a perfect cube with sides of 10 cubits (11), its walls coated with purest glittering gold. Here, in the heart of the sanctuary, the Holy of Holies, you might have expected to find a god—an image of metal or stone. But Israel’s God was the living Creator. The room was empty, save for a wooden chest (12). The chest had a lid of solid gold, worked at the end into two great winged figures that formed a seat or throne. It was the throne of God Himself, Israel’s king, dwelling in their midst in a cloud infused with fire. The glory of the Lord is referred to over and over again in the wilderness journey.

God’s presence was seen outside the Tabernacle in the form of a pillar of cloud which remained directly above the Holy of Holies. It was a cloud in the daytime, but glowed red with fire at night. When the time came for the camp to move, it went before the people as a pillar stretching up into the sky. It indicated the presence of the angel of the Lord. As soon as the camp was pitched, it filled the Holy of Holies: ‘For the cloud of the Lord was on the tabernacle by day, and fire was in it by night, in the sight of all the house of Israel throughout all their journeys’ (Exodus 40:38).

The Way to God

What are we to make of this strange building, pitched at the very heart of the encampment of Israel? What was the meaning of its court and rooms, and its peculiar furniture? Firstly, there is the wonderful thought that the great Creator, Lord of heaven and earth, sent His angel to dwell in the camp, in a building made from the offerings of the people. We may think of God as being remote, somewhere ‘up there’ in heaven. But the Bible teaches He condescends to come right into the lives of ordinary people. Isaiah the prophet had a lovely way of putting it. ‘I dwell in the high and holy place’ says God, ‘and also with him who is of a contrite and lowly spirit’ (Isaiah 57:15). Jesus puts it this way: ‘If anyone loves me, he will keep my word, and my Father will love him, and we will come to him and make our home with him’ (John 14:23).

Notice the conditions. Israel in the wilderness had to make the Tabernacle exactly as God commanded Moses. Isaiah says we must be humble. Jesus says we have to keep his word. In humble obedience, the offering of the best of our lives to God will be rewarded by His presence and His guidance through life’s journey. The Tabernacle was a daily reminder to Israel of God’s interest in their lives.

We can take the analysis further. The division of the Tabernacle into two compartments taught Israel that one day, on God’s terms, they could come even closer to Him. We have the clues in a fine passage in the letter to the Hebrews. The Holy of Holies was separated from the outer by the veil. ‘By this the Holy Spirit indicates’, we read, ‘that the way into the holy places is not yet opened as long as the first section is still standing (which is symbolic for the present age)’ (Hebrews 9:8–9).

On this basis the outer room, often called the Holy Place, represents the Christian’s mortal life now. The furniture corresponds to that idea. The table with the meal represents God’s generous provision for His children’s needs, and also the regular sharing of bread and wine at the Lord’s Supper (Luke 22:19). The light dispelling the cavernous gloom came from seven lamps, each burning pure olive oil. Oil is a Bible symbol of God’s Holy Spirit, condensed for us into His holy word, the Bible, which enlightens our path. The altar of incense stood close to the veil. Incense was burnt on this altar morning and evening. Incense always stands for prayer in the Bible (see Revelation 8:4). Like the smoke from the incense, His people’s prayers pass through to God in heaven, represented by the glory of God beyond the veil.

Ordinary people could not pass beyond the veil. The perfect cube of the inner room, the Holy of Holies, with the gold of immortality and the brilliant glory of God’s presence is barred to us, says the Apostle, so long as the Holy Place, our mortal life, continues. But there is hope. The veil was a curtain, not a wall. In a beautiful figure it represented, says the letter to the Hebrews, the body of Jesus Christ (Hebrews 10:20). His flesh, sacrificed on Calvary, linked mortal humans to immortal God. Carrying the offering of his own blood, poured out in love for his followers, Jesus went through the veil to prepare the way for others to follow. With a deep significance, Luke in his Gospel recalls that at the moment of Jesus’ death on the cross the heavy veil in the Temple tore in two (Luke 23:45). The barrier was removed. Now we can come near to God.

We can see parallels here with the Garden of Eden. In the book of Genesis, Adam and Eve were expelled from the garden paradise because of their sin. They were kept out by the cherubim and a flaming sword (Genesis 3:24). They could perhaps stand at the entrance and see the Tree of Life in the distance. In faith, they would offer the sacrifices God had prescribed, which pointed forward to the death of His Son (Genesis 4). All they could hope was that one day they might be allowed to return to the perfection they had lost.

The Tabernacle preserved the same visual imagery. The altar, the bowl for washing, the Holy Place, and the Holy of Holies beyond, all are pictures of the way of faith and obedience that leads to paradise: the sacrifice of Christ, baptism for washing away our sins, the daily life of discipleship, and at last immortality in the Kingdom of God.

The chapter in Hebrews concludes with the promise of Christ’s return, to bring eternal life to his friends, and that fellowship with God that belongs to immortality: ‘For Christ has entered, not into holy places made with hands, which are copies of the true things, but into heaven itself, now to appear in the presence of God on our behalf… so Christ, having been offered once to bear the sins of many, will appear a second time, not to deal with sin but to save those who are eagerly waiting for him’ (Hebrews 9:24, 28).

The book of Revelation concludes with John’s vision of a holy city that comes down to earth. It has no temple, for the city itself is a perfect cube, and all who inhabit it enjoy perfection. ‘Behold’, he writes, ‘the dwelling place of God is with man. He will dwell with them, and they will be his people, and God himself will be with them as their God’ (Revelation 21:3).