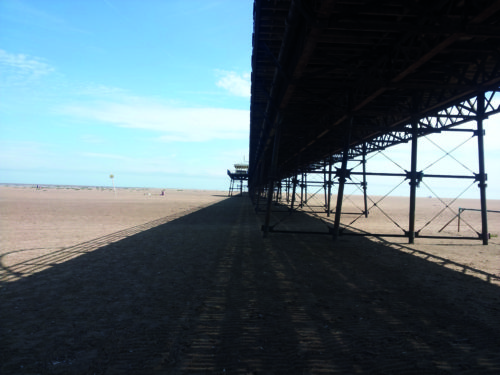 “I thought we were going to the seaside”, cried Tommy. “We are at the seaside Thomas”, insisted his mother. “But there is no sea!” wailed Tommy and stamped his foot.

“Well we are near the pier; if you go down that you will see the sea; I can show you photographs of when the sea flooded the main street and my Grandad used to paddle here”.

Very few things can be proved ‘without any doubt’. We believe because of evidence. This applies to scientific theories, medical research, relationships and promises. We need to look at the evidence and decide for ourselves what or who to trust.

The Bible teaches that faith is about things that we cannot see or prove:

But without faith it is impossible to please Him, for he who comes to God must believe that He is, and that He is a rewarder of those who diligently seek Him (Hebrews 11:6).

But God does not ask for blind faith. Time and time again in the Old Testament He said that He would do something dramatic so that the people would know that He was the one and only God (Exodus 7:5,1 Kings 20:13,Isaiah 45:1–7,Ezekiel 12:15). But what evidence is there that we can actually believe the Bible itself?

Evidence about the Bible

Firstly, there is the astonishing consistency in the details of the Bible. It consists of 66 books written over a period of 1,600 years by more than 40 different people. Yet it has the same message from beginning to end, with lots of ‘undesigned coincidences’ showing its reliability. Long novels written by one person are famous for inconsistencies in one book. The Bible is not like this.

Moreover, despite lots of people doubting the existence of people and places mentioned in its history records, archaeologists have discovered many ancient writings which confirm Bible details.

Secondly, it is very unusual in its honesty. Our news reporters may claim to be independent but their reports often vary depending on their beliefs and those of their employers. This Is nothing new. Ancient historians ignored events which they did not like, or which showed their country to be bad.

We do not expect the Egyptians to give accounts of the awful plagues in the time of Moses, or the fact that so many of their Hebrew slaves escaped out of their land (Exodus 7–14). The Assyrians would not record the fact that many of their people believed in the Jewish God after the preaching of the Hebrew prophet Jonah. Nor would they record the destruction of their king Sennacherib’s army in the time of Hezekiah (Jonah 3:4–10, 2 Kings 19:35–37). They were very keen to record the skills, possessions and victories of their kings and leaders.

In marked contrast, the Bible tells of the sordid behaviour of one of its most famous and important kings. David committed adultery and murder and told lies, and these details are not in any way hidden (2 Samuel 11). Also, the Jewish prophets repeatedly tell their nation that they are wicked, disobedient and that their God will punish them severely.

Thirdly, the Bible can tell the future with remarkable accuracy. There are graphic details of crucifixion before it was practiced (Psalm 22). The fate of nations is given in detail, for example the downfall of Egypt (Isaiah 19:5–7, Ezekiel 30:10–12) and Babylon (Isaiah 13:19–22).

There are many prophecies about the Jews, including the fact that they would be scattered throughout the world and hated (Leviticus 26:27–39, Ezekiel 22:15–16). There was also the amazing prophecy that they would return to Jerusalem. Nowadays we are used to hearing about Jews in Israel, but even in the 1890’s this seemed impossible, and many people said that the prophecy could never come true. But it did. In 1948 the Jews were allowed to go back to Israel and in 1967 they captured back Jerusalem.

Even those who would like to reject the dates of Bible prophecies cannot deny that this prophecy (Luke 21:24) was in print in 1611 in the King James Bible. There are still copies of it. And this was about 400 years before there was any sign of the Jews going back to Israel.

Tommy refused to believe the evidence offered by his mother. This was despite the fact that she had several pieces of information to support her truthful claim. Apart from a grumpy child and a frustrated mother there were no great consequences.

The Bible has a message about life and death. It explains why we are here, why we die and how we can be saved from extinction. It tells us about God and what He asks us to do. It is either the biggest lie ever or the most important book. So ignoring it could have devastating consequences. Let us not ‘stamp our feet’ if the evidence is not exactly of the sort that we want: let us look carefully at the evidence that exists. The decision is ours.