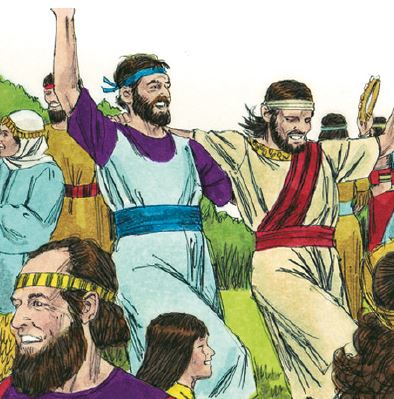 THE BOOK OF ESTHER is the account of an orphaned Jewish girl who rose to become the Queen of Persia, during the Jewish exile around 500 years before the birth of Jesus Christ.

Esther lived with her uncle Mordecai in the Persian capital Shushan. The first two chapters relate how, due to her striking beauty and her charm, she won the heart of King Ahasuerus.

At the end of chapter 2 Mordecai overheard a plot to assassinate the King. With Esther’s help he foiled it, but he received no recognition.

Plot to Destroy the Jews

Chapter 3 sees a man called Haman appointed as chief of the King’s nobles. All the King’s officials were obliged to bow in homage to Haman, but Mordecai refused. Furious, Haman determined to get revenge not just on Mordecai but on all his people. (Neither Haman nor Ahasuerus knew that Esther was Mordecai’s niece.)

Haman persuaded Ahasuerus to issue a decree to destroy all Jews in the empire. Adolf Hitler was not the first to propose a ‘final solution’ to the ‘Jewish problem’!

When news of Haman’s plot emerged, there was consternation among the Jews. Mordecai sent and urged Esther to act—only she could save her people (chapter 4). She took her life in her hands, and commenced a strategy to persuade the king to reverse his decree.

In chapters 5 and 6 we see an amazing series of ‘coincidences’ in which we can see God’s hand at work assisting Esther. She invited the King and Haman to a feast. Haman, full of pride and spite, built an enormous gallows on which to hang Mordecai. That night the King could not sleep, so he ordered his servants to read to him the chronicles of his reign. He discovered that Mordecai had not been rewarded for saving his life. Haman arrived to seek permission to hang Mordecai on his gallows. The King asked Haman what should be done for the man whom the King wanted to honour. Haman, assuming that was himself, said “Let a royal robe be brought which the king has worn, and a horse on which the king has ridden, which has a royal crest placed on its head. Then let this robe and horse be delivered to the hand of one of the king’s most noble princes, that he may array the man whom the king delights to honour. Then parade him on horseback through the city square, and proclaim before him: ‘Thus shall it be done to the man whom the king delights to honour!’” (6:8–9).

Ahasuerus commanded Haman to do that for Mordecai. Haman was humiliated, and that night Esther exposed his plot and he was himself hanged on the gallows he had built for Mordecai (chapter 7).

The King issued a decree permitting the Jews to defend themselves against their attackers. Each year ever since the Jews have celebrated their deliverance on the Festival of Purim on the 13th of Adar, the date they were to be destroyed.

How to Avert a Death Sentence

Although, curiously, there is no mention of God in the book of Esther, we can clearly see His hand at work in its events—just as we can see it at work in the entire history of the Jewish people. If God can work so effectively in the life of a nation, He can also work in your life and mine.

We are all living under a death sentence. It’s not as immediate as the decree to destroy the Jews in the Persian empire, but it’s real: “The wages of sin is death” (Romans 6:23). The Bible explains what we need to do—we must repent and be baptised. “He who believes and is baptized will be saved; but he who does not believe will be condemned” (Mark 16:16). Like Esther, we must recognise the peril we are in and make that leap of faith.