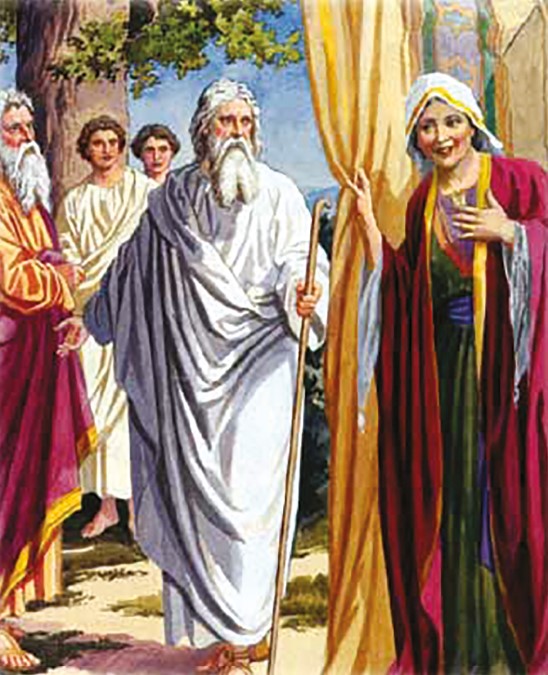 IT IS HEART-RENDING when a couple cannot have a baby. And the older couples get, the harder it becomes. Desperate would-be parents go to all sorts of lengths to try to conceive. In some cases worried friends fear that they are trusting in the impossible: hoping against hope.

Centuries ago, Abraham and Sarah faced a similar plight. On several occasions God had promised Abraham that his descendants would become a great multitude of people (for example Genesis 13:14–16, 15:5–6, 17:4–6). But Abraham’s wife Sarah was infertile (Genesis 11:30). Worse still, they both grew old—very old. Abraham was 99 years old, and Sarah was 90 and way past child-bearing age. But once again, God promised that Abraham and Sarah would have a son:

I will surely return to you about this time next year, and Sarah your wife shall have a son (Genesis 18:10).

This defied any ‘natural’ logic, all the experience and evidence of life. It made no human sense. But it made sense to Abraham. He did not ‘weaken’ or ‘waver’ at this promise (Romans 4:19–20), but believed. He not only believed in God, but he believed God—that He keeps His promises, even when this is ‘against nature’.

The son was born. He was called Isaac, and he was the only son of Abraham and Sarah. His name means ‘laughter’, and he must have brought untold joy to his parents. All seemed well.

And then there was another momentous twist to the story. God told Abraham to sacrifice Isaac: to kill this very special and unique son of promise. To kill the son he had longed for, the son promised by God, the son who was to father a multitude of people (Genesis 22:2). Again, Abraham obeyed, not doubting.  Although  he had never experienced resurrection, he believed that God could raise Isaac back to life and so he was actually prepared to kill him on an altar. We know this because of comments in the New Testament:

By faith Abraham, when he was tested, offered up Isaac, and he who had received the promises was in the act of offering up his only son, of whom it was said, “Through Isaac shall your offspring be named.” He considered that God was able even to raise him from the dead, from which, figuratively speaking, he did receive him back (Hebrews 11:17–19).

At the last minute an angel of God stopped Abraham (Genesis 22:10–12), and Isaac lived to father the Jewish nation.

What amazing faith Abraham had! We can be pretty sure that he knew about the events recorded in the early chapters of Genesis, but we don’t know what else he knew about God. We do know that he trusted God implicitly, he believed God’s words more than the evidence of his own knowledge and experience. No wonder he is called the ‘friend of God’ (James 2:23). And no wonder we are urged to have the faith of Abraham.

Do We Believe God?

God wants us to believe that He exists, and that we can find Him: ‘And without faith it is impossible to please him, for whoever would draw near to God must believe that he exists and that he rewards those who seek him’ (Hebrews 11:6).

He asks us to believe that He will forgive us and that He wants to give ‘His flock’ eternal life in His kingdom on earth. Jesus said: ‘seek his kingdom, and these things will be added to you. Fear not, little flock, for it is your Father’s good pleasure to give you the kingdom’ (Luke 12:31–32).

In contrast to Abraham, we have much scientific knowledge. But like Abraham, there are still things that we cannot explain. We have the complete Bible, full of accounts of the character, promises and actions of Almighty God; details of the life, teaching, death and resurrection of Jesus, His Son. We did not see Jesus, and the events of his life are outside our experience and inexplicable by science. But after convincing the sceptical disciple Thomas, Jesus said ‘Have you believed because you have seen me? Blessed are those who have not seen and yet have believed’ (John 20:29).

God does not expect us to have ‘blind faith’—there are many reasons why we can have confidence in what the Bible says. But faith is precisely about what we cannot actually see: otherwise it is not faith! ‘Now faith is the assurance of things hoped for, the conviction of things not seen. For by it the people of old received their commendation’ (Hebrews 11:1–2).

Events such as the return of Jesus to earth to raise the dead and set up God’s Kingdom are completely outside our experience. We might even think that they make no human sense. We cannot work out how they could or will happen. Nor could Abraham. Nor could the disciples. But that is no reason to disbelieve. For the Bible clearly teaches that when God says something will happen then it surely does. ‘For nothing will be impossible with God’ (Luke 1:37).